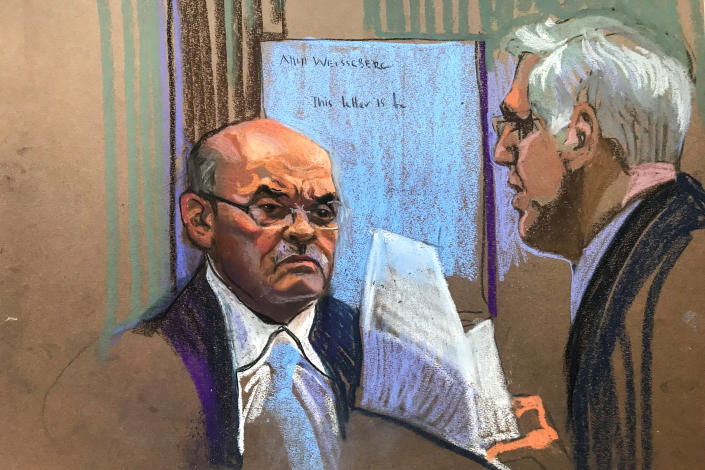 Former President Donald Trump and his two oldest sons signed the checks that the Trump Organization’s chief of finance used to cheat his taxes, but they didn’t know they were frauds, the ex-CFO testified Thursday.

Allen Weisselberg, 75, testified for the second day in the criminal trial of Trump’s family business in New York City that the only other person in the company who knew about the tax fraud was its controller, Jeffrey McConney.

Asked by Trump attorney Alan Futerfas during cross-examination whether Trump or anyone else in the firm has authorized him to “commit tax fraud,” Weisselberg said, “No.”

“Have you colluded with the Trump family?” Futerfas asked. “No,” said Weisselberg.

Weisselberg also testified that he didn’t take any off-the-books benefits to benefit the company — he said he did it for himself.

“Your decision not to pay taxes was solely in favor of Allen Weisselberg?” Futerfas asked. “Right,” replied Weisselberg.

He acknowledged that the company benefited financially, but said, “It was my own personal greed that led to this.”

Weisselberg, the plaintiff’s star witness, was indicted along with the Trump Organization last April for what the administration described as a 15-year plan to swindle taxpayers’ money from the system.

Weisselberg pleaded guilty in August and agreed to testify for a lesser sentence. While he was removed as CFO after being indicted, he testified Tuesday that his duties are largely the same and he still earns the same amount — about $1 million a year.

Weisselberg said Trump was aware of the benefits he received because he and later his sons Donald Trump Jr. and Eric Trump would sign the checks.

When questioned by Futerfas, Weisselberg said the only person who knew he was not paying proper taxes on the benefits was McConney.

McConney testified last week that Weisselberg was the only bad actor, calling him a “micromanager” who had to sign off on all financial decisions.

Weisselberg was the only person charged in the case. Under the terms of his agreement with prosecutors, he agreed to pay nearly $2 million in taxes, interest and fines and serve five months in prison, followed by five years of probation. He also agreed to “testify truthfully at the upcoming trial of the Trump Organization,” or face a prison sentence of five to 15 years.

He testified earlier Thursday that the Trump Organization cleaned up its business practices after Trump was elected president because of the added oversight.

“Everyone was looking at our business from every angle imaginable,” including Trump himself, Weisselberg said.

Futerfas asked him if he had betrayed the family’s trust with the fraud. “Yes,” replied Weisselberg.

When asked if he was ashamed of his actions, he replied, “More than you can imagine.”