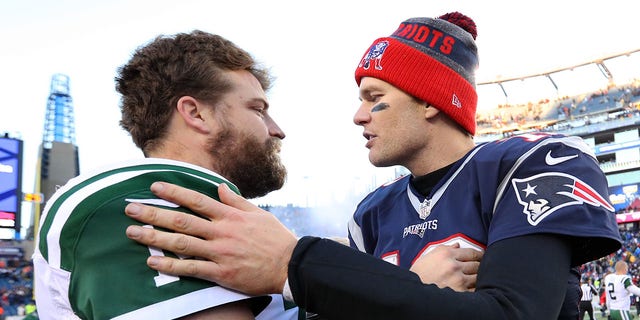 However, Fitzpatrick thinks this is just the tip of the iceberg of the disrespect Brady has shown him throughout his career.

He played for nine teams during his 17-year career, but Brady was apparently never a fan.

Tom Brady of the New England Patriots, right, talks to Ryan Fitzpatrick of the New York Jets after the Patriots defeated the Jets 41-3 at Gillette Stadium December 24, 2016 in Foxboro, Massachusetts.
(Maddie Meyer/Getty Images)

Fitzpatrick played for all three of Brady’s AFC East rivals and Brady handled things quite easily almost every time. But the 39-year-old recalled a time when Brady struggled and showed no sportsmanship after that.

“I’ve told this story before, but he just p—-s me off. Because you’re in Buffalo, you play New England, they kick our a– every year, they beat us,” Fitzpatrick said on “Pardon My Take.” “In 2011, we finally took them out. It was right at the beginning of the season. We had a great start and he threw five interceptions into the game, which was just amazing to watch.

“And (Brady would) take off right away. Like, no handshake, no quarterback in the middle of the field, no, ‘Where are the cameras? Okay, hey, stay healthy buddy.’ Knock on the head and let me go. I just ran away. So it bothered me so much because there was no respect. Every time I played him after that, I was like, ‘Okay, let’s make this guy respect me.’ ‘”

Ryan Fitzpatrick of the Miami Dolphins warms up prior to a game against the New York Jets at MetLife Stadium November 29, 2020 in East Rutherford, NJ
(Elsa/Getty Images)

Fitzpatrick went 3-11 in his career against the Patriots, but he fondly remembers one of those wins.

It was their final matchup in Week 17 of the 2019 season. When Fitzpatrick played for the Miami Dolphins, the Pats came to town for the final game of the season as heavy favorites to earn a first-round bye. But the Dolphins won 27-24.

“The last one was especially sweet, as it was Tank For Tua’s year. Start 0-7. ‘Is this the worst football team of all time?’ They beat us by 40 points at the start of the season… It was his last regular season game as a patriot, Fitzpatrick recalled.

Fitzpatrick’s career doesn’t come close to Brady’s, but in mutual encounters, Fitzmagic had the last laugh.