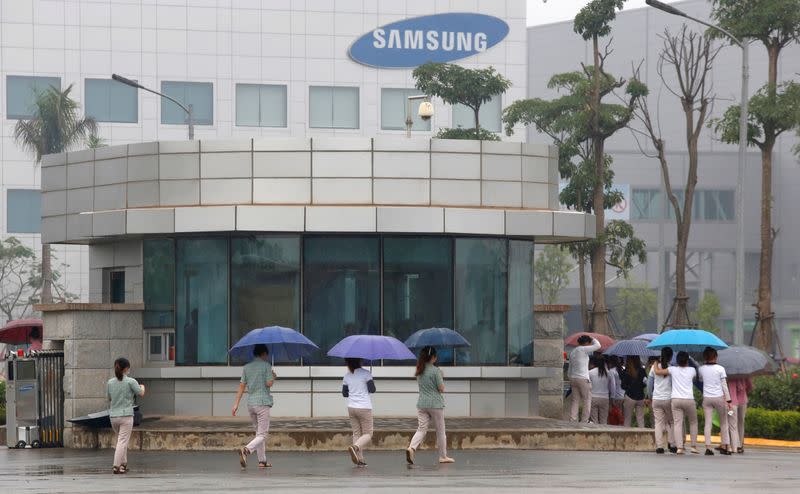 THAI NGUYEN, Vietnam (Reuters) – Samsung Electronics Co Ltd has scaled down production at its massive smartphone factory in Vietnam, workers say, as retailers and warehouses grapple with rising inventories amid a global decline in consumer spending.

America’s largest warehouse market is full and major US retailers such as Best Buy and Target Corp are warning of a slowdown in sales as shoppers tighten their belts after early releases in the COVID era.

The effect has been acutely felt in Vietnam’s northern Thai Nguyen province, one of Samsung’s two mobile manufacturing bases in the country where the world’s largest smartphone supplier produces half of its phone production, the Vietnamese government said.

Samsung, which shipped about 270 million smartphones in 2021, says the campus has the capacity to make about 100 million devices per year, according to its website.

“We are only going to work three days a week, some lines are adapting to a four-day work week instead of six before, and of course no overtime is needed,” Pham Thi Thuong, a 28-year-old worker at the factory told Reuters.

“Business was even more robust at this time last year when the COVID-19 outbreak was at its peak. It’s so lukewarm now.”

Reuters was not immediately able to determine whether Samsung is moving production to other production locations to compensate for the reduced production of the Vietnamese factory. The company also makes phones in South Korea and India.

Samsung told Reuters it has not discussed lowering its annual production target in Vietnam.

The South Korean tech giant is relatively bullish on smartphone demand in the second half, saying during its earnings call last week that supply disruptions had largely been resolved and demand would either remain flat or even see single-digit growth.

It aims to surpass its previous flagship smartphone, the Galaxy Note, in sales of foldable phones in the second half. It is expected to unveil its latest foldable devices on August 10.

But a dozen workers interviewed by Reuters outside the factory, almost all said things were not good.

Thuong and her friends who have worked for Samsung for about five years said they had never seen deeper production restrictions.

“Of course there is a low season every year, often around June-July, but low means no OT (overtime), no working days like this one,” Thuong said.

She said managers had told the workers that the stocks of the workers were high and that there were not many new orders.

Research firm Gartner expects global smartphone shipments to fall 6% this year due to spending cuts and a sharp drop in sales in China.

Samsung is Vietnam’s largest foreign investor and exporter, with six factories across the country, from the northern industrial hubs of Thai Nguyen and Bac Ninh, where most phones and parts are made, to the factory in Ho Chi Minh City, which produces refrigerators and washing machines are made.

The South Korean company has poured $18 billion into Vietnam, fueling the country’s economic growth. Only Samsung contributes a fifth of Vietnam’s total exports.

Its arrival nearly a decade ago in Thai Nguyen, about 65 km (40 miles) from the capital Hanoi, transformed the area from a sleepy farming district into a sprawling industrial center that now also produces phones for Chinese brands, including Xiaomi Corp.

Generous benefits, including subsidized or free meals and accommodation, have attracted tens of thousands of young workers to the region, but reduced working hours have left many feeling in trouble.

“My salary was cut in half last month because I only worked four days and did nothing for the remaining week,” said worker Nguyen Thi Tuoi.

Job cuts are keeping some workers in mind, but none have been announced so far.

“I don’t think there will be any job cuts, just some time reductions to meet the current global situation,” said one employee, who declined to be named because she didn’t want to jeopardize her role as team leader.

“I really hope the current cutbacks won’t last long and we’ll be back to normal soon.”

(Additional coverage by Khanh Vu in Hanoi and Joyce Lee in Seoul; editing by Miyoung Kim and Stephen Coates)