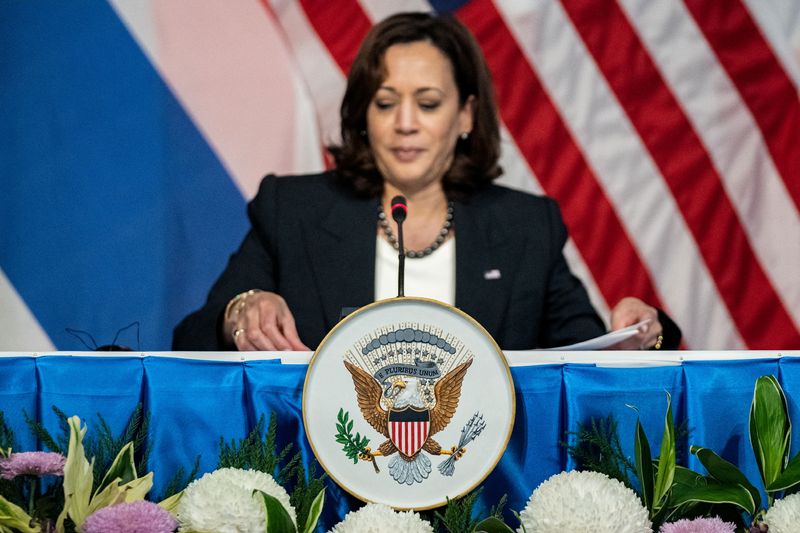 By David Brunnström and Karen Lema

The following are some of the main issues surrounding her visit:

Why is the Philippines so important to the United States?

The Philippines is a former American colony and became an ally of the United States in 1951, five years after independence. During the Cold War, there were some of America’s largest overseas bases, facilities vital to the US wars in Korea and Vietnam. Philippine nationalism forced Washington to abandon it in the 1990s, but in recent years the Allies have been cooperating on counter-terrorism and in response to increasing Chinese military pressure in the South China Sea, where the Philippines has rival claims.

Because of its geographic location, the Philippines is now at the center of US plans to deter and respond to any Chinese attack on Taiwan, a self-governed island that China claims as its own.

Harris is also planning a highly symbolic stop in the Philippine islands of Palawan in the South China Sea to show US support for his ally.

How does the country fit into US planning for a potential conflict over Taiwan?

Of the five U.S. treaty allies in the Indo-Pacific — Australia, South Korea, Japan, the Philippines, and Thailand — the Philippines is closest to Taiwan, Luzon’s northernmost landmass only 200 km (120 mi) away .

Experts such as Randall Schriver, who served in the Trump administration as top Pentagon official for East Asia, said Luzon is of great interest to the US military in particular as a potential site for missiles, missiles and artillery systems that could be used to counter an amphibious invasion of Taiwan.

He said the political climate for more military access seemed to be improving under Marcos after a rough patch of relations during President Rodrigo Duterte’s six-year term, who sought closer ties with China.

Washington carefully courted the visit of Marcos and Harris after two meetings between President Joe Biden and Marcos and a visit by Secretary of State Antony Blinken to Manila in August.

How do Washington and Manila strengthen security cooperation?

The two sides have moved forward with an enhanced defense cooperation deal that dates back to the Obama presidency and has languished under Duterte. EDCA allows the US access to Philippine military bases for joint training, equipment pre-positioning, and the construction of facilities such as airstrips, fuel storage, and military housing, but not a permanent presence.

To what extent the Philippines would allow their territory to be used to defend Taiwan remains unclear. Romualdez, the ambassador to Washington and a relative of Marcos, said in September that it would only allow US troops to use its bases in the event of a conflict in Taiwan “if it is important to us, to our own security.”

The United States has proposed adding five more EDCA sites to the current five. Southeast Asia expert Gregory Poling of the Center for Strategic and International Studies in Washington said Harris’ trip could yield an announcement of an agreement.

How would a conflict in Taiwan affect the Philippines?

Poling believes it would be extremely difficult for the Philippines to remain neutral in a conflict in Taiwan given its proximity to the island and treaty obligations to the United States. It would be the most likely destination for Taiwanese refugees and the approximately 150,000 Filipinos living on the island would be endangered by a Chinese attack.

What would the Philippines expect in return?

Schriver said that with the Pentagon’s growing concern over a possible attack on Taiwan, Washington would want assurance of access within the next two years, though any overt planning for a contingency in Taiwan is highly sensitive to Manila.

Poling said it was critical to provide Manila with sufficient funding to help modernize its long-neglected armed forces. Washington recently announced $100 million in foreign military funding and $66.5 million for EDCA sites, but the amounts are small compared to what Washington is sending to the Middle East and Ukraine.

“The second Philippine demand is a continued clear commitment to defend Filipinos in the South China Sea,” Poling said. “Rhetorically they have, but the question for both sides is, do they have it functionally? If there was a Chinese attack on a Philippine base in the South China Sea tomorrow, could the Americans actually do anything about it? And that is far less clear, which is another reason why EDCA is so important.”

Kevin McCarthy could get a floor fight for the speaker. That hasn’t happened in a century.