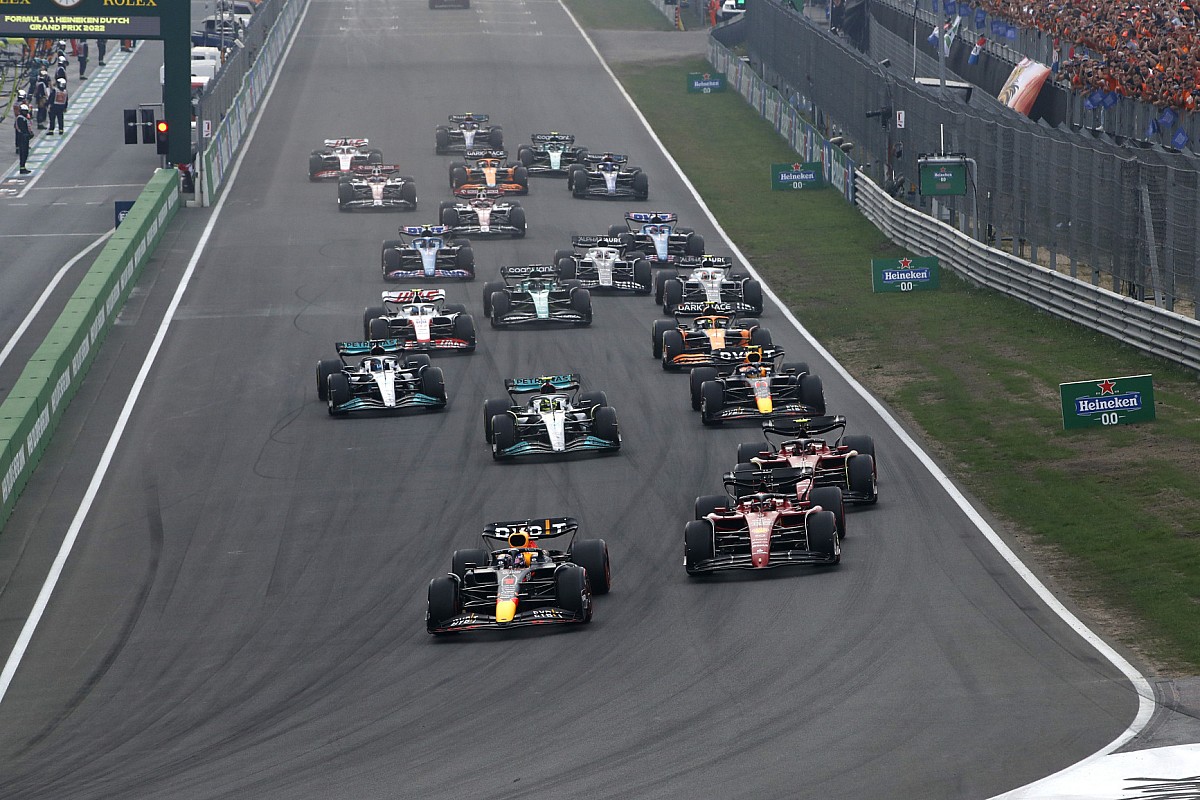 Verstappen led from pole, ahead of the Ferraris of Charles Leclerc and Carlos Sainz. They all started on soft tyres, with Mercedes duo Lewis Hamilton and George Russell opting for mediums from the start – allowing them to pursue a one-stop strategy after moving to hard tyres.

That strategy was ruined by a strange-looking scenario where AlphaTauri’s Yuki Tsunoda stopped twice on the track, giving Verstappen the advantage after a virtual safety car, but the pendulum struck when Valtteri Bottas’ Alfa Romeo also stopped, causing a full safety car came forward.

Hamilton re-took the lead, but had a tire disadvantage compared to the laggards, so Verstappen immediately passed him on the restart. Hamilton dropped to fourth and raged on the radio about his tire strategy.

How the Dutch Grand Prix went

Verstappen kept his pole advantage on the run into Turn 1, with Leclerc and Sainz ahead, the latter just escaping a touch from Hamilton in Turn 1.

Pressured by Alex Albon’s Williams, Kevin Magnussen got an off on lap 2 that sent his Haas back after brushing the wall. Russell’s Mercedes DRS-ed past the fast-starting McLaren of Lando Norris for sixth on lap 3.

Sainz was the first of the front-runners to pit on lap 15 but suffered a disastrous 12.7 second stop as the left rear wheel wasn’t ready, leaving Perez ahead – although he had to run over Sainz’ spare wheel gun to get out of his pit . Sainz dropped to sixth place as a result.

Leclerc, who lost 5s to Verstappen, came on lap 18. Verstappen came into the pits one lap later and this freed the Mercedes, who both started on mediums as opposed to the soft-skinned starters ahead of them.

On fresher tyres, Verstappen passed Russell for second in Tarzan on lap 28, chasing Hamilton, who was 2.6 seconds down. Hamilton went to the hard pits one lap later and came back in fifth, with Russell following a few laps later.

Hamilton attacked Perez for the third lap on lap 36 and, after a couple of near misses around the lap, passed him one lap later in Tarzan, but was further delayed by three seconds due to a return to Sebastian Vettel (Aston Martin) – and was now over a pit stop behind Verstappen as a result. Russell passed Perez with ease two laps later.

However, Verstappen was not happy with the medium tire and Hamilton started to catch it, as did second-placed Leclerc. Perez was called in for hard tires at this point, to help Verstappen with the next tire choice – and set the fastest lap right away. Leclerc pitted for hards on lap 46.

Yuki Tsunoda took off at Turn 5 claiming his tires were not mounted properly, but got back in line without triggering a safety car. After another pit stop, he parked again and triggered a virtual safety car – killing Mercedes’ planned one-stop strategy and stranding the recently stopped Ferraris on hard tires while Norris and Fernando Alonso (Alpine) switched to soft tires behind them.

Verstappen pitted for fresh hard tires, as did Hamilton and Russell for new mediums. Verstappen resumed the race 13 seconds ahead of Hamilton, Russell and Leclerc.

Valtteri Bottas’ Alfa Romeo stopped before Turn 1 just as Sainz passed Ocon for sixth under yellow. Verstappen went to the pits for soft tires, which allowed Hamilton to take the lead ahead of Russell.

Under the safety car, Russell again stopped for softs, as did Sainz who nearly hit Alonso as he rejoined the fast lane.

Hamilton resumed the race, on used mediums, with the soft-shod Verstappen, Russell and Leclerc. Perez was fifth on mediums, ahead of Sainz, Alonso, Norris and Ocon.

Verstappen passed Hamilton for the lead and entered Tarzan with 11 laps to go, while Sainz passed Perez the same way for fifth.

Russell passed an angry Hamilton for second on lap 64, the two nearly colliding at high speed on the start/finish straight. Leclerc also shot past Hamilton to push him off the podium.

Sainz came under pressure from Perez for fifth, but was also given a 5-second time penalty for an unsafe release, with Perez running wide on the gravel near Tarzan with a few laps to go.

Verstappen stroked home to win, ahead of Russell and Leclerc. Hamilton held on to finish fourth, with Sainz losing fifth due to his penalty, dropping him to eighth behind Perez, Alonso and Norris.