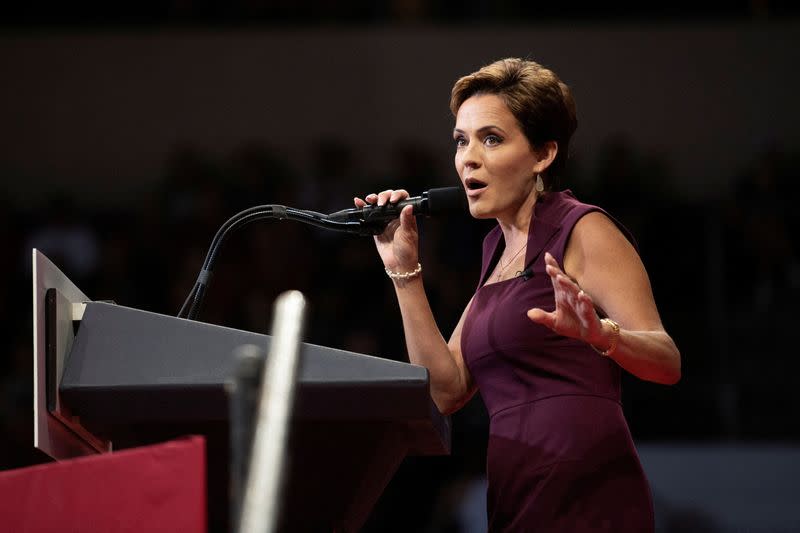 (Reuters) – Voters in Arizona, Michigan, Kansas, Missouri and Washington will choose candidates for Congress, the governor and other offices as former President Donald Trump’s attempt to maintain dominance over the Republican party is retested.

Here are the main races to watch:

Republican contenders include former news anchor Kari Lake, who is backed by Trump and has reiterated his false claims that the 2020 election was fraudulent. Its main rival is developer Karrin Taylor Robson, who is backed by several incumbent Republicans, including former Trump Vice President Mike Pence and Arizona Governor Doug Ducey.

On the Democratic side, the leading candidate is Arizona Secretary of State Katie Hobbs, who has built a national profile by vociferously denying Trump’s charges. She faces Marco Lopez, a former Obama administration official and former mayor of Nogales, a border town.

A bitter battle to decide who will challenge incumbent Democratic Senator Mark Kelly in November has come down to three Republican candidates. Blake Masters, chief operating officer of Thiel Capital and president of the Thiel Foundation, has the financial backing of tech billionaire Peter Thiel and the backing of Trump. Recent polls show him leading state attorney general Mark Brnovich and Jim Lamon, a former chief executive of an energy company.

On the Republican side, the frontrunner is Trump-backed State Representative Mark Finchem, who attended the Jan. 6, 2021 meeting that preceded the attack on the US Capitol and embraced Trump’s stolen election claims. He faces several opponents. The Democratic contest pits former Maricopa County Recorder Adrian Fontes against Reginald Bolding, the minority leader of the House of Representatives.

Kansas Attorney General Derek Schmidt, who has Trump’s backing, is expected to beat an underfunded opponent in the Republican contest. The winner will challenge incumbent Democratic Governor Laura Kelly, who is among the most vulnerable Democratic governors in November.

Kansas voters will decide whether the state constitution should continue to protect abortion rights in the first statewide electoral test of abortion rights since the U.S. Supreme Court overturned Roe v. Wade, the landmark 1973 ruling that legalized abortion nationwide.

The ballot question asks whether voters will change the state constitution to state that there is no right to abortion. The passage of the amendment, which requires a simple majority, would overturn a 2019 state Supreme Court ruling that established the right to abortion in Kansas.

A field of Republicans are vying to take on Democratic Governor Gretchen Whitmer, whose aggressive approach to closing businesses amid the coronavirus pandemic has made her a top target for conservatives.

The chaotic Republican primary saw several candidates disqualified after a scandal involving false signatures on petitions to get on the ballot. In June, the FBI arrested candidate Ryan Kelley, a real estate agent, on felony charges related to the US Capitol attack, though he has continued to campaign. Other Republican candidates include Tudor Dixon, a conservative commentator who has reiterated Trump’s false allegations of electoral fraud, and Kevin Rinke, a businessman. Trump has not supported anyone.

Incumbent Representative Peter Meijer, one of 10 Republicans who voted for Trump’s second impeachment, faces a primary challenge from John Gibbs, a former Trump administration official who has the support of the former president. Meijer is a moderate Republican in a neighborhood the Democrats see as a potential pick-me-up. The House Democrats campaign arm angered some supporters by placing ads promoting Gibbs, who is seen as an easier target in November.

Eric Greitens, the former Missouri governor who resigned in disgrace after sexual assault and campaign finance scandals, has slipped into the polls after a barrage of ads about attacks and calls from within his own party to back out amid fears his appointment would cost the government. party a safe place.

State Attorney General Eric Schmitt and U.S. Representative Vicky Hartzler are the other top candidates. Trump refused to support Hartzler, but did not support Greitens, as many advisers had encouraged him.

THE 3RD CONGRESSIONAL DISTRICT OF THE STATE OF WASHINGTON

Representative Jaime Herrera Beutler, one of the 10 Republicans who voted to impeach Trump in 2021, faces a primary challenge from Joe Kent, a former green beret officer endorsed by Trump. Herrera Beutler has held the seat since 2010.