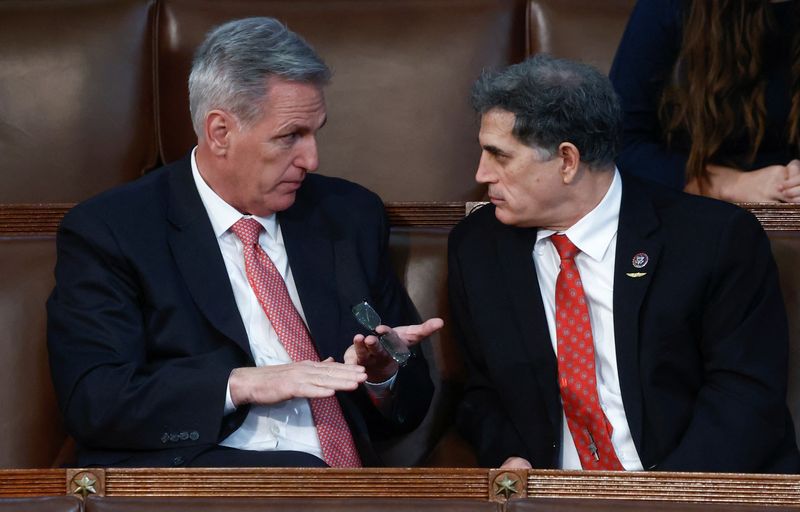 By Gram Slattery and Moira Warburton

WASHINGTON (Reuters) – Republican Kevin McCarthy received a major boost in his quest to become Speaker of the US House of Representatives after 15 staunch Republicans opposed to him reversed their votes on Friday, citing a deal on house rule changes.

Here are the most prominent opponents and where they stand now:

Bishop, a former attorney representing a North Carolina district, said he was pleased with the “substantial progress” in improving “the distribution of conservative votes among key committees.” He switched to McCarthy on the 12th ballot.

Going ahead of McCarthy on Friday afternoon, the Oklahoma freshman said a deal will “allow conservatives to rein in out-of-control spending.”

Clyde of Georgia is a member of the far-right House Freedom Caucus, which opposes McCarthy. He moved Friday to support McCarthy.

Cloud of Texas acknowledged on Thursday that the battle for the speakership “looks like chaos” for its voters at home. On Friday, he was satisfied with the framework and voted for McCarthy.

The second-term Florida congressman, who cast one of his first votes in the House to reject the results of the 2020 election, came out of relative obscurity this week when he received some 20 votes in the presidential election. speaker.

He is the only one of the group of hardliners who initially supported McCarthy, changed his vote on the third ballot and went back on the 12th.

Florida’s first-term congresswoman won in November on campaign contributions from McCarthy, but she declined to endorse him until Friday.

Harris has represented a Maryland district since 2011. “If the agreement we were able to finalize in recent days is implemented, it will be the biggest change in the way the House works and it will be much more responsive to the American people,” he said. on Twitter on Friday.

The former South Carolina real estate developer has insisted for weeks that he would never support McCarthy without serious concessions. Although the deal won his votes, Norman clarified that it was conditional support, telling reporters that if McCarthy failed to honor the agreement, he would be voted out.

Tennessee’s freshman representative declined to support McCarthy until the 12th ballot, stating that he was doing so “on behalf of my colleagues who negotiated in good faith.”

Perry of Pennsylvania is the chairman of the House Freedom Caucus, the right-wing ideological group in the House and home to nearly all McCarthy opponents.

“We are at a turning point,” he said on Twitter after voting for McCarthy.

Roy of Texas is widely known in Congress for obstructing procedural motions and dissatisfaction with legal rules.

“We need to curb out-of-control spending and that’s a big part of it,” he said after turning his vote to McCarthy, referring to the agreement reached.

The newly elected Texas congressman said on Twitter after flipping his vote to McCarthy that “a few individuals (who oppose McCarthy) are just sleepers, more interested in self-promotion than restoring the Republic.”

Boebert, a born-again Christian representing a sprawling district in western Colorado, is a leading Republican fundraiser known for her confrontational tactics and unwavering support for gun rights, who won one of the biggest victories in the November midterm elections.

The Arizona attorney ran against McCarthy in the first ballot for speaker. He was one of the lawmakers most aggressively promoting Trump’s false claims that his 2020 election loss to Democratic President Joe Biden was the result of fraud. On Friday afternoon, he tweeted, “I’m not leaving.”

Crane defeated a longtime Arizona Democratic congressman for his 2022 seat. He remains opposed to McCarthy.

Gaetz, one of McCarthy’s most outspoken opponents, is a close ally of Trump. He has falsely claimed that the January 6, 2021 attack on the Capitol was initiated by far-left extremists. He was also a top fundraiser in the caucus, raising more than $6 million for his re-election bid.

Good, a deeply religious social conservative who represents a largely rural district in West Virginia, is among the members who have said they would not vote for McCarthy under any circumstances.

The lone congressman from Montana has remained opposed to McCarthy, repeatedly voting for fellow Republican Kevin Hern instead.