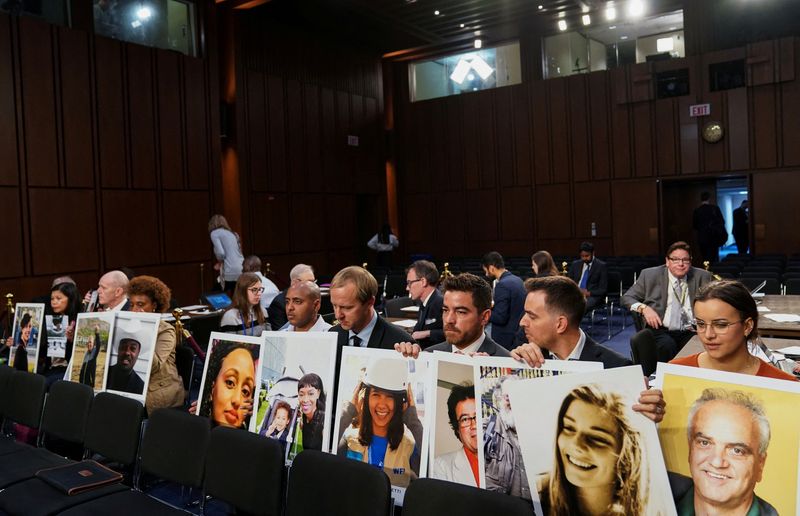 WASHINGTON (Reuters) – Relatives of passengers killed in two Boeing 737 MAX crashes on Friday urged US Justice Department lawyers to reverse a 2021 deal that allowed the US aircraft maker to escape criminal charges.

US District Judge Reed O’Connor in Texas ruled last month that people killed in two Boeing 737 MAX crashes are legally considered “crime victims” and said he would decide which remedy should be imposed.

The 2018 and 2019 crashes in Indonesia and Ethiopia, which cost Boeing more than $20 billion, led to a 20-month flight ban on its best-selling aircraft and prompted Congress to pass legislation reforming aircraft certification.

ALSO READ  Keith Ellison, Who Locked Up George Floyd’s Killers, Is In A Fight For His Political Life

Family members and their lawyers met with government lawyers for about five hours on Friday, with some participating virtually from around the world.

The families argued that the U.S. government “lied and violated their rights through a secret process,” and asked O’Connor to revoke Boeing’s immunity from criminal charges, which was part of the $2 Boeing settlement .5 billion in 2021 due to allegations of fraud and conspiracy related to the malfunctioning of the aircraft. design, and to sue Boeing for misdemeanor.

Nadia Milleron, mother of a 24-year-old who died in the second Boeing MAX crash, said she was disappointed in the meeting, saying the Justice Department “backed a deal with Boeing that was done in secret and illegally , withdrew input from victims and let Boeing off the hook.”

Both Boeing and the Justice Department are opposed to reopening the deferred prosecution agreement, which included $500 million in damages for victims, a $243.6 million fine and $1.7 billion in airline damages.

The Justice Department said in a lawsuit that it opposes not suing Boeing, but reversing the agreement, because it would “impose severe hardship on the parties and the many victims who have received compensation.”

The department said without the agreement it would lose its leverage to force Boeing to implement the public safety reforms.

Boeing said in a lawsuit that it opposes any attempt to reopen the agreement, calling it “unprecedented, unworkable and unfair…An investigated party is entitled to finality and to the benefits of a resolution it has negotiated with the government.” negotiated.”

Boeing noted that it has been adhering to the agreement for nearly two years.

The Justice Department said Friday after the meeting that it takes its obligations to victims seriously.