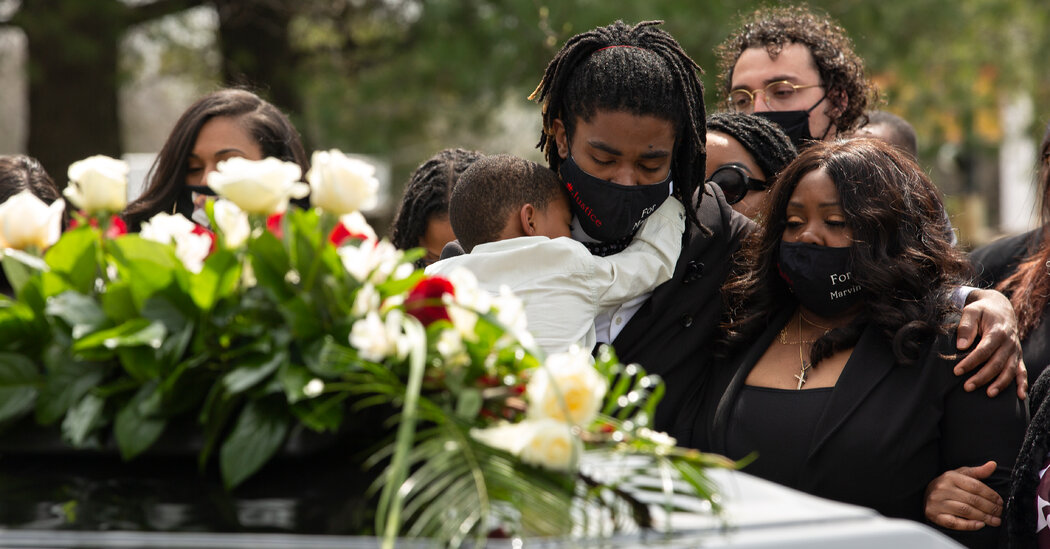 Days after the death of Marvin D. Scott III in the custody of detention officers in Collin County, Texas, members of his family and community gathered outside the county jail in the northern suburb of McKinney , a suburb of Dallas.

They were demonstrating to demand transparency from county officials. They wanted to know how Mr. Scott died within hours of his arrest on March 14, and they wanted the officers who held him that night to be held accountable.

Three weeks have passed since the protests began and the protesters have yet to miss a night. “I made a vow that I would be there every night until they stop these officers,” said Mr. Scott’s sister, LaChay Batts, 28.

Mr. Scott, a 26-year-old black man who lived in Frisco, Texas, was arrested in nearby Allen for possession of marijuana on March 14. He had less than two ounces of the drug, authorities said. – an offense.

Police said they took Scott to hospital because he was acting erratically. He was then taken to the county jail, where county officers detained him and used pepper spray on him. A hood was placed over his head.

Mr Scott died later that night, but the family did not learn about it until the afternoon of the next day, according to Ms Batts.

Mr. Scott was a “gentle giant,” Ms. Batts said. “You had no choice but to be happy when you were around him,” she said, “because he was such a good pure spirit.

Episodes of schizophrenia had brought Mr Scott in contact with law enforcement a few times before, Ms Batts said, and officers usually took him to specialized mental health facilities.

But after officers in Allen met him while answering a call at a shopping center last month, they took Mr Scott to hospital, where he stayed for a few hours before a doctor arrived. frees him.

He was then taken to McKinney County Jail, where he was held, pepper sprayed once and placed under a hood, county officials said. After he stopped responding at around 10:30 p.m., Mr. Scott was taken to hospital and pronounced dead.

In the weeks that followed, Ms Batts and other protesters – who usually number in the dozens, although attendance has gradually declined – gathered outside the county jail, typically from 9 p.m. to midnight.

ALSO READ  Police caused George Floyd's death, but drugs and heart disease played a role, according to the medical examiner.

Alejandra Bernal, 18, a high school student from Collin County who has attended the protests since they began, said the protests could end if the family’s demands, which include the arrest of the officers involved, are met. Until then, she said, “we don’t plan to move.”

Protesters sometimes positioned themselves to obstruct vehicles bringing prisoners into the prison, Ms. Bernal said. They took up posters and chanted megaphones. They arranged plastic cups along a chain-link fence to spell out messages such as “Justice for Marvin Scott III” and “Stay in Power”.

And to commemorate the Sunday holiday, they organized an Easter egg hunt.

“It is important to do this for a while so that decision makers and elected officials responsible for responding to community demands can hear this cohesive voice,” he said. “I think well-organized protests continue until the demands they have made are met.”

The sheriff’s office did not respond to questions on Monday about protesters outside its doors.

At a press conference on March 19, Sheriff Skinner called Mr Scott’s death a tragedy and said he had met those close to Mr Scott. He added that the Texas Rangers, a state law enforcement agency, were reviewing video footage of the episode.

But he did not provide a detailed explanation of what happened as an internal investigation is still ongoing and the results of the autopsy have yet to be released. The Texas Rangers are leading a criminal investigation.

Ms Batts said she planned to continue protesting. “I want to see them arrested so that we can finally relax and not have to be here every night,” she said of the detention officers who held her brother before his death.

“A life has been taken,” she said, “and they have to be held accountable.”

With a new set of CDC panel meetings, the J.&J vaccine hiatus will likely last for at least another week.