The family of the late Baringo Deputy Governor Charles Kipng’ok, who collapsed and died at Jomo Kenyatta International Airport (JKIA), were shocked to learn of his death via social media.

Speak with NationBaringo residents and friends of the family confirmed Kipng’ok’s death started as rumors before their worst fears were confirmed overnight on Wednesday, September 14.

A David Biegon, a captain of the Kericho Golf Club of which the DG was a member, added that the family had yet to come to terms with the loss.

“When we went to his home in the town of Kericho to break the news to his family, we found that they got it through social media a little earlier,” Biegon said.

He praised the politician as a pillar of society that dealt freely with everyone.

“His death is a great blow to all of us and we pray to God to give the family the strength to bear the loss,” the captain noted.

The residents told how a series of phone calls and messages touched the family.

“Before a series of calls came in, the relatives, like others, learned of the collapse and subsequent death of Facebook and WhatsApp groups,” Benard Korir of the residence revealed.

Despite the cause of death being unknown, the family revealed that the DG had an underlying health condition: high blood pressure and diabetes.

Kipng’ok collapsed and died on Wednesday, September 14, moments after boarding a Kenya Airways plane at the JKIA.

“Kenya Airways regrets to announce that a passenger suffered respiratory problems this evening while boarding KQ612 which was scheduled to depart for Mombasa at 1900hrs.

“The passenger was pronounced dead by JKIA medical personnel while the plane was still on the ground,” part of the statement read.

Several leaders have sent their condolences to the fallen politician.

“Charles Kipng’ok was a responsive, sincere and passionate leader who worked tirelessly for the people of Baringo. He was principled and encouraged tea reform in our country.

We pray to God to give the family, loved ones and people of Baringo strength during this sad time. Rest in peace,” President William Ruto said in his message of condolence.

Mary Mwiti, CEO of the Board of Governors, also mourned the late DG, during the introduction of the provincial chiefs to Mombasa. 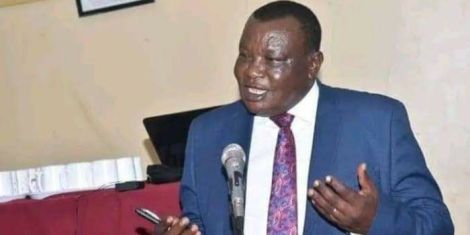