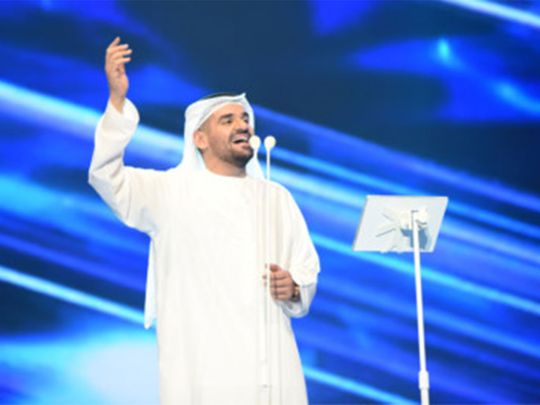 Sharjah: Emirati artist Hussain Al Jassmi will headline the concert at the Al Majaz Amphitheater in Sharjah on December 3 as part of the UAE’s 49th National Day celebrations (December 2).

The Sharjah National Day Celebrations Committee announced on Saturday that Al Jassmi would be joined by a number of young Emirati artists, including Aryam, Jassim Mohammad, Faisal Al Jasim and Oraib.

Khalid Jasim Al Midfa, head of the Sharjah National Day celebrations committee, said the concert, held under strict health and safety measures, will accommodate the audience at half the capacity of Al Majaz Amphitheater. Tickets for the concert are priced at Dh30, Dh50, Dh75 and Dh100 and can be purchased online.

Concert for a noble cause

Proceeds from the concert will be used to support the Big Heart Foundation’s initiatives for refugees and other needy communities around the world, he added. A professionally trained team will be available to help people with disabilities and accompany them to their place. All the necessary health security measures have been put in place to protect against the spread of COVID-19.

The Big Heart Foundation, a humanitarian initiative by Shaikha Jawaher Bint Mohammad Al Qasimi, a leading advocate for refugee children at the United Nations High Commissioner for Refugees (UNHCR), aims to mobilize humanitarian efforts to safeguard the rights and improve the lives of vulnerable children and their families around the world, especially in the Arab world, through advocacy, humanitarian and development efforts.

Al Midfa pointed out that Al Jassmi was chosen to headline the concert because of his stature as an artist in the region and his initiatives in the service of the country by conveying the message of peace and tolerance to Arab and international societies. . The participation of young Emirati artists in the concert stems from Sharjah’s willingness to support Emirati art and their contribution to Emirati and Arab music, arts and culture in the Gulf, he added.

Al Jassmi said, “I am very happy and look forward to celebrating all national occasions like this every year, especially the founding of our nation and our federation. We feel extremely proud and patriotic and have a right to celebrate what we have accomplished as a young nation, marching swiftly on the path of progress and prosperity. “

The artist is known for his love for humanitarian work and has visited vulnerable and needy communities in the region with the aim of offering hope. He has been honored as a special ambassador by a number of Arab and international humanitarian organizations. He is known to promote tolerance between religions and peoples of the world and has been honored as a special guest for his efforts by Pope Francis.

Mosques in UAE to reopen for Friday prayers from December 4

The Bharat Express News - November 25, 2020 0
A man has been arrested after a police officer was attacked in east Auckland. Photo: RNZ / Richard Tindiller Police...