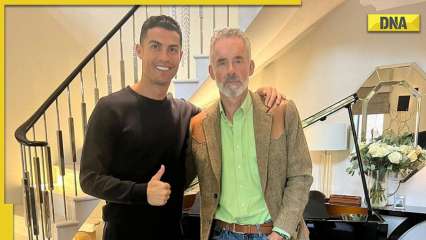 Cristiano Ronaldo is once again in the spotlight for his latest social media activity. The Manchester United ace has used Instagram to share his first post since he mourned the passing of Queen Elizabeth II.

Ronaldo posted a photo with controversial psychologist Jordan Peterson and called his “friend” on Instagram. Peterson has been widely vilified on social media for some of his divisive views.

He has strong views on masculinity and the 60-year-old has previously described himself as an “professor against political correctness.”

READ| When will the Premier League and other competitions in the UK resume after Queen Elizabeth’s death?

While the Canadian is no stranger to controversy, his recent interaction with Ronaldo has infuriated fans. Ronaldo shared an image alongside Peterson, writing: “Nice to see you my friend! #Seeyousoon.”

The latter replied, “I have rarely met anyone who more clearly deserved what he deserved. Good to meet you.”

The post has racked up more than 5 million likes in just 24 hours, and fans made their feelings clear in the comments. While one user wrote, “Most unexpected collaboration,” another noted that Ronaldo “tarnished his legacy” by meeting Peterson.

Ronaldo had previously shared a photo of Queen Elizabeth, who is mourning her sudden death at the age of 96.

“Seven years of my career I played in the Premier League, making this my eighth season living in England. During these years I have felt the UK’s undying love for its Queen and how important Her Majesty was and will forever be to be.” to the British people. I pay my respects to her memory and mourn this irreplaceable loss to the country I have learned to call home. My thoughts and prayers are with the royal family,” wrote the five-time Ballon d’Or winner.

Although the 37-year-old has been on the bench in recent games, he is looking to leave an impression when United travel to Moldova mid-week to take on Sheriff Tiraspol in the UEFA Europa League.

England vs Germany live: score and latest updates from the last match before the 2022 World Cup