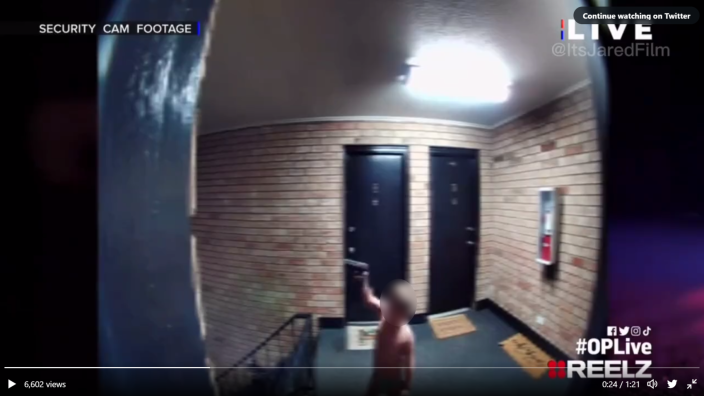 A Beech Grove father was taken into custody after a video broadcast live on TV showed his toddler son walking around waving a gun in the air.

The man’s arrest was featured on the Reelz series “On Patrol: Live,” during the TV show’s live broadcast on Saturday. He was identified as Shane Osborne and is facing neglect on a dependent charge, prison records show.

Beech Grove police officers were alerted to the situation by a downstairs neighbor, who reported that the child had a gun and was pointing it at people, according to the likely explanation for Osborne’s arrest.

More:Beech Grove Police Department Will Be Featured On ‘On Patrol: Live’ TV Show

The TV show captured officers arriving at the apartment complex then speaking to a neighbor outside her apartment, who told them she believed the toddler was in possession of a real gun.

Officers went upstairs to the apartment where they believed the child lived and the door was answered by a toddler. Osborne then walked to the front of the apartment and stated that he had been sick all day and was unaware that his child had left the unit, police said.

ALSO READ  Did your food go bad during a power outage? You may be able to get compensation. Here's how

Osborne denied having a gun in the apartment and told officers that on the television show broadcast, he didn’t even have a toy gun in his residence.

“I’ve never brought a gun into this house before,” Osborne said, as a cartoon show played in the background on a TV in the living room. “If so, it belongs to my cousin.”

A man has been arrested for alleged child neglect after video aired of a toddler holding, pointing and playing with a gun in an Indiana apartment complex during “On Patrol: Live,” a show hosted by NewsNation’s Dan Abrams on the Reelz -network. Cameras tracking Beech Grove Police Department officers captured the arrest Saturday. The incident was filmed and broadcast on “On Patrol: Live,” police said. A police report from Beech Grove PD shows an incident that occurred around 4 p.m. Saturday, coinciding with the broadcast of the TV show. Shane Osborne, 45, was arrested on charges of felony neglect of a dependent, according to the report. Read the full story here: https://www.newsnationnow.com/crime/video-of-toddler-waving-loaded-gun-leads-to-man-arrest on television/ #Toddler #ToddlerWithAGun #Gun #OnPatrolLive #DanAbrams #Indiana #Crime

Osborne assisted officers in a “cursive” search of the apartment and, according to the affidavit, no firearms were in sight.

Officers were leaving the apartment complex when approached by another neighbor, who alerted them to surveillance video of the child with the gun.

The surveillance video aired on the show captured the toddler walking down the hallway of the apartment complex waving the gun overhead. At one point in the video, the child aims the gun at his face.

Officers went back to the man’s apartment and stated they had video of the child holding a gun. The man continued to deny having a gun, but stated, according to the affidavit, that a family member may have left one in the apartment.

Police searched a bedroom closet and did not find the weapon. An officer asked the child where he had left the gun, and the toddler helped police locate it, the affidavit said.

The firearm was located in the living room in a desk on wheels under a TV. The gun had 15 rounds in the magazine but no rounds in the chamber, according to the affidavit.

The broadcast showed officers securing and taking custody of the firearm before arresting Osborne. The man told officers the firearm belonged to his cousin, according to the affidavit.

Osborne also stated that he did not know the gun was in the apartment or that his child knew where it was. The man stated that both he and the child’s mother were sick that day and that he believed the child was watching TV and playing, the affidavit reads.

After it aired on TV, the man’s arrest was reported by CNN, The Washington Post and other media outlets across the country.