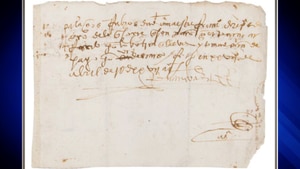 FBI special agents in Boston have recovered a 495-year-old manuscript signed by famed conqueror Hernando Cortés. The Bureau believes it was stolen from Mexico’s national archives sometime before 1993.

The manuscript is a payment order signed by Cortés on April 27, 1527 authorizing the purchase of rose sugar for 12 gold pesos. According to the US Department of Justice, the manuscript is said to be one of several documents retrieved from Mexico’s national archives sometime before 1993.

According to the DOJ, a person co-signed the manuscript for an online auction at a Massachusetts auction house. Mexican authorities contacted US federal officials and warned them that the paperwork had been stolen. The auction house then removed the item from auction and turned it over to Mexican officials.

“As a result of exceptional work by the Asset Recovery Unit in our office and our law enforcement partners, this historic artifact has been recovered. Mexico, like the United States, has national archives, and the Cortés Manuscript is nearly five centuries old. Our goal in filing today’s forfeiture is to return the manuscript to its rightful owner,” said U.S. Attorney Rachael S. Rollins.