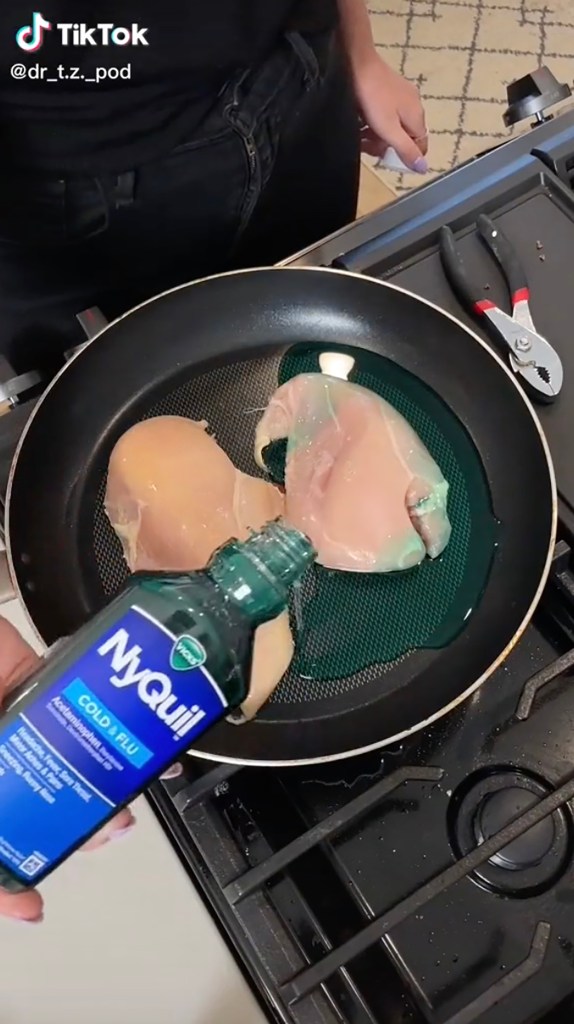 It’s a recipe for disaster – and possibly the hospital.

The US Food and Drug Administration warns of a social media challenge with people coating their poultry in NyQuil.

Dubbed the “NyQuil Chicken Challenge,” social media users cover their meat in the over-the-counter medication, which is used to treat flu symptoms, colds and allergies.

Unsurprisingly, the FDA warned that it could have very dangerous results — not just when ingested, but also during the cooking process.

“Boiling a drug can make it much more concentrated and alter its properties in other ways,” the FDA explained in a warning, adding that even inhaling the drug’s vapors while cooking can cause high levels of the drugs entering your body.

“It can also damage your lungs,” the warning continued. “Put simply, someone can take a dangerously high amount of the cough and cold medication without even realizing it.”

It’s unclear why the FDA has only now issued the warning about the challenge, as videos have been circulating online for months. In the clips, people cook chicken breasts and pour large amounts of the liquid drug — which contains acetaminophen, dextromethorphan and doxylamine — into the pan, coating and submerging the meat in it.

The FDA noted that the social media trend relied on “peer pressure” with “online video clips of people abusing non-prescription drugs and encouraging viewers to do the same.”

ALSO READ  Dear Abby: My husband keeps talking about how attractive his exes were

Overdose with NyQuil can cause symptoms such as seizures, severe dizziness, liver problems and breathing problems, to name a few, and can potentially be fatal.

The challenge is similar to other challenges scattered online, including an earlier TikTok challenge called “sleepy chicken.” Another trend, called the “Benadryl Challenge,” urged people to take large doses of the allergy drug containing diphenhydramine to induce hallucinations, the FDA said.

dr. Aaron Hartman, a physician and assistant clinical professor of family medicine at Virginia Commonwealth University, explained why the trend is dangerous — and potentially fatal.

“If you were to eat one of those cutlets all the way through, it would be like consuming a quarter to a half bottle of NyQuil,” he previously told MIC.com.

“When you cook cough medicine like NyQuil, you boil the water and alcohol in it, saturating the chicken with a super-concentrated amount of medicine in the meat.”

The usual recommended dosage of NyQuil liquid is: