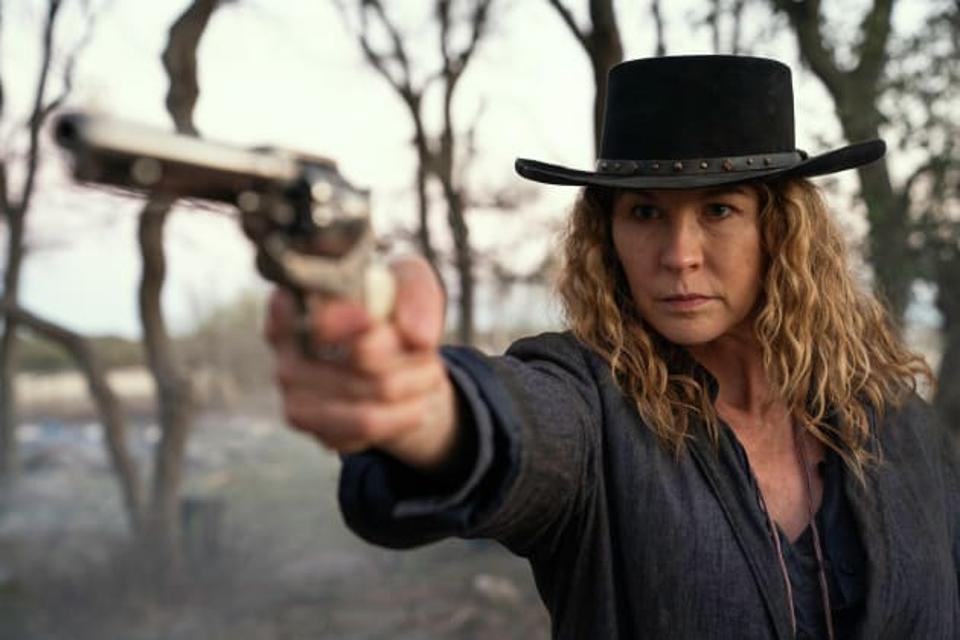 “We’re all in June right now.”

But also, we are all in June now because we all recently had our husbands shot by a teenage girl. It kind of unites us, don’t you think?

Sunday’s episode of Fear the living dead brings back a character we’ve never heard of and never seen before.

So yeah, not Madison. There are spoilers ahead, you bastards.

While I have good reason to believe at this point that Madison (Kim Dickens) will indeed return at some point, I don’t think that will happen in Season 6 – or at least not until the very end of the season. as soon as possible. More information on this in another article.

Instead, the “returning” character is John Dorie Sr. (Keith Carradine), the long lost father of John Dorie Jr. (Garret Dillahunt) who until now everyone assumed he was. dead.

What a strange coincidence that June (Jenna Elfman) meets him now, just a few episodes after Dakota (Zoe Colletti) slaughters poor John in cold blood – and was then kissed by the Morganites with open arms. June was fired from Morgan Town because Morgan (Lennie James) was angry with her over the death of Grace’s baby.

I guess June wouldn’t come to them and he was forced to come in her place? It doesn’t look like June at all. It’s more like writers trying to create a crazy storyline for me. We don’t see Grace (Karen David) at all, but I guess she’s also distorted, with having to lose her baby after meeting her as a teenager in Dreamland.

So June is turned down and she leaves, meeting Dwight and Sherry along the way before stumbling upon a mysterious sharp shooter. She chases the shooter and follows him into his camper van where she sees walls filled with images and investigative clues and so on, all pointing at the believers – the wacko cult led by Teddy who is spraying “The La end is the beginning ”.

The sharp shooter appears and points a gun at June, asks her if she is one of the them. Turns out he stalked the same group Morgan and Alicia (Alycia-Debnam Carey) were looking for, but wasn’t so lucky. This, despite having apparently been on the hunt for years, while Alicia and her small crew may have found them split. Once the mysterious stranger realizes that they are both looking for the same thing, he tells June to drive the motorhome. She’s upset that they have to leave her friends, but honestly, since neither Dwight nor Sherry have arrived to help her at this point, I don’t know why she cares.

Of course, once they’re gone, Dwight and Sherry – especially Sherry – are deeply concerned and ride past the motorhome on horseback. Although Dwight has repeatedly told Sherry not to overwork the horses, she just keeps galloping madly until her horse collapses. Dwight is telling her that he thinks they’ll have to shoot the poor beast down when she pulls out her gun and shoots it without blinking.

Did I mention how horrible Sherry is? She’s just the worst. All that time Dwight spent looking for her, pining for her and she ends up being a terrible human being.

She reveals to Dwight that she isn’t going to stick to the masks after all. No, she has bigger plans. For some strange reason, she has decided to return to Virginia where she plans to kill the man responsible for “it all”: Negan. At this point, of course, she is fully aware that he was imprisoned in Alexandria and that his saviors have been dissolved. She’s been gone so long with no need for revenge but fair suddenly must travel hundreds of kilometers through a wasteland infested with zombies in order to kill a man already imprisoned and out of his reach.

Thanks for the awesome writing, Fear the living dead. You know how to spin a thread!

Back on the motorhome, June does some diversion maneuvers and knocks the old guy down. She shoots her gun at him and instead of shaking in fear, he asks her where she got it. “It’s my weapon,” he told her. “I am John Dorie.”

Look at her butt.

Uh, i mean what a crazy twist!

What are the odds that June will meet John’s long lost father just days after John was shot and killed by that annoying little kid, Dakota? I mean, seriously what are the odds? Can we talk about the chances of this actually happening?

First, John Dorie Sr. abandoned his wife and child 40 years ago. For 40 years, he and his son have never crossed paths as the two men live in the same state and hang out in the same general neighborhood. Never met, never crossed before or after the zombie apocalypse.

The two never got wind of each other despite the fact that they were both entangled in the same social scene. John the Younger was working for the Rangers for a spell, and the Rangers were embroiled in a conflict with the Believers. And it turns out that John the Elder was the man responsible for sidelining Teddy (John Glover), the Leader of the Believers, 40 years ago. It is this case, in which old man John decided to bend the law and “do the wrong thing for the right reason” in order to lock up Teddy, whom he also lost confidence in himself. This is, we learn, what led him to abandon his family to save them or some of these BS. This is typical FearTWD absurd logic. The kind of shit people put in scripts because it sounds deep, but it’s really ridiculous without a better, more detailed explanation.

And what a coincidence that the very villain our heroes now face is the man Dorie the Aged sidelined four decades ago, and he’s once again on the trail of the man at the same time that Morgan et Cie. What a coincidence! Too bad he hadn’t come a few days earlier to perhaps help his son in his darkest hours. Boy, timing is definitely something in this show!

Also: Everyone and their mom have a super powerful walkie talkie on this show and yet never once did John the Son or John the Father accidentally hear each other on the radio all this time? Is that so?

Okay Andrew and Ian. I buy it.

Either way, the previous generation’s John Dorie talks with June and they discuss a whole bunch of stuff, albeit mostly about what happened with Teddy years ago (albeit without a lot of detail) and regrets and others. At one point, they go to the magical convenience store and Old Man Dorie locks June in the back so he can go find Teddy on his own. See, he abandons her like he did his little boy – to protect her.

Then he goes to his old cabin where he meets a dirty squatter. The evil squatter also knows Teddy and the Believers and informs Geriatric John that the group wants to “kill everyone”. We already knew that, of course, with the wrench and the nuclear submarine that ran aground in the middle of Lone Star State and Teddy obviously running out of a few screws. But now the evil squatter has confirmed it, then he shoots Aged Johnny and June shows up and shoots him just in time, and Dwight and Sherry are there, and the Tin Man, and the scarecrow and even his little dog. too. !

They all happily return to Morgan Town where Morgan welcomes everyone with open arms, even in June because she brought John’s father back, which somehow makes up for the loss of Grace’s baby. Oh damn.

June finally reads the letter John left her when he separated. She reads it aloud to everyone gathered and, wouldn’t you know, the whole thing is tailor-made to be read not only in June, but to John’s dad who he just happens to be present in a scene that is in no way artificial.

Baby John’s letter was almost certainly written (by the show’s writers, that is) with his father’s introduction in mind, and it’s so on the nose it’s downright painful. Jenna Elfman does her best with the aqueducts but it’s so bad people. Dorie talks about the difficulty of leaving in June, but he hopes she understands why he had to do it (although his reasoning is total crap, of course), just as he himself finally figured out why Dear Ol ‘ Dad had to leave (although his reasons were even more crappy). It’s as much of a letter to dad as it is to June, so it’s handy that she ran into him when she did, and hasn’t read the letter yet, and Dwight and Sherry have found his jacket with the letter in it and and and and …

Yeah, this show is so bad. I know a lot of people keep saying that Season 6 is this massive improvement over Season 5, but that’s like saying food poisoning is better than antifreeze poisoning. It doesn’t do any good, but it probably won’t kill you.

Check out my video review of this episode below and please subscribe to my recently relaunched YouTube channel! Thank you!

Tell me what you thought of this episode and if I’m out of place with my gripes or not. I just can’t believe that real people come up with these plots and don’t see all the plot holes, magical coincidences and other lazy bullshit. Nobody checks scripts before going into production?