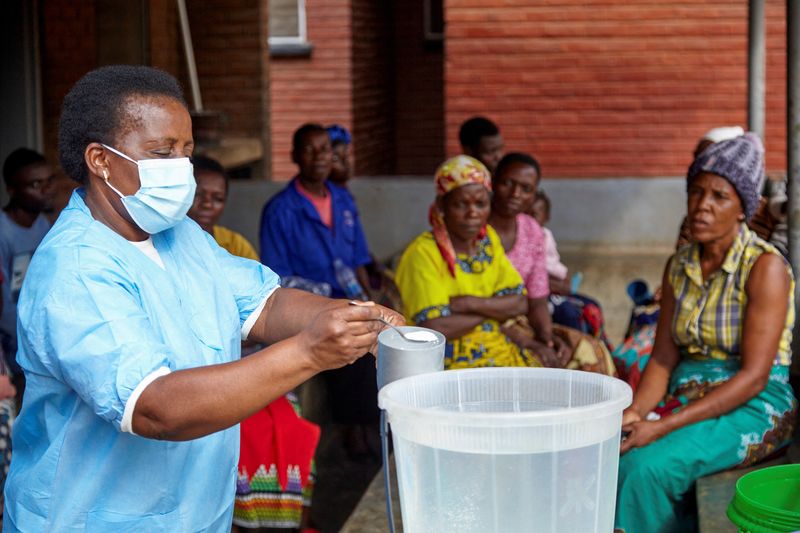 By Eldson Chagara and Frank Phiri

BLANTYRE (Reuters) – Malawi is gripped by a cholera outbreak that has spread across the country, killing 292 people and infecting 9,447 since March when the first case was reported, according to Health Minister Khumbize Chiponda.

Most of the deaths from the disease, which is spread through contaminated water and food, are occurring in four districts on Lake Malawi and in Blantyre, the country’s second largest city.

Treatment camps, mostly makeshift tents, have been set up and cholera patients are arriving in droves, straining the already overburdened health care system from the scarcity of essential medicines and equipment.

Chiponda said most of the deaths occurred after patients did not go to facilities for treatment until late in the progression of the disease. The outbreak now has a fatality rate of 3.1%, up from 2% in March.

Reuters journalists visited three major treatment centers around Blantyre, located in Limbe and Ndirande in the central urban business district, and Chileka in the rural suburbs.

“We expect more cases, but we are still not well prepared in terms of equipment and knowledge capacity,” said Eunice Mselemu, a nurse at Ndirande Clinic, in the most populous municipality of Blantyre.

ALSO READ  Mike Pompeo throws old Trump boast back at him. Critics say not so fast.

Health workers fear the worst is yet to come as the current cases were recorded before the onset of wet weather.

Malawian John Mangani is among those who received rehydrating fluids and treatment too late in the disease to survive, his family said.

ALSO READ  Adopted as a child, the Texas woman now helps others find hope and feel loved at Christmas

“Everything seems to have happened so fast and we lost him,” said Aida, Mangani’s sister in Chiswe, a village near Limbe Clinic.

Malawi has yet to roll out a second phase of cholera vaccines after receiving 2.9 million doses through the World Health Organization earlier this month, leaving many people scrambling for leftover doses from a previous vaccination campaign in May.