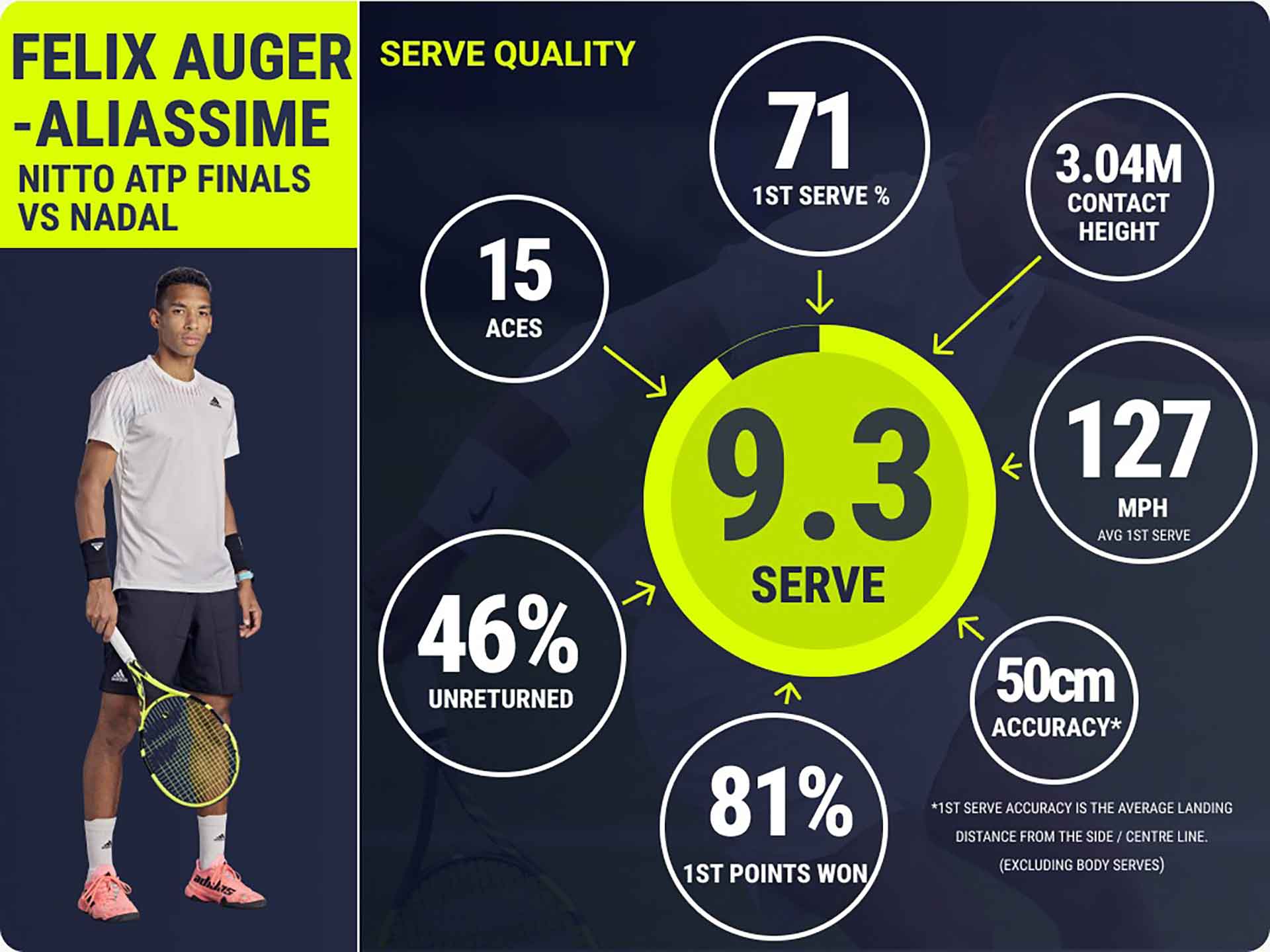 Felix Auger-Aliassime’s red-hot streak may have had a recent blip, but the Canadian couldn’t be held back for long at the Nitto ATP Finals.

The fifth seed made an impressive comeback from his opening defeat to Casper Ruud at the season finale in Turin, where he beat top seed Rafael Nadal 6-3, 6-4 on Tuesday to clinch his first win in the prestigious season finale.

“I think I got used to the conditions on the center court with one game here,” said Auger-Aliassime. “It helped me a lot. I felt my game was better today. My serve was great and the return and backhand were much better. I hit it with my more consistency and quality. When I play like this I have proven that I can compete and beat some of the best players in the world.”

Despite the loss, Nadal has not been eliminated from the battle for year-end No. 1 in the Pepperstone ATP rankings. If Ruud wins a set against Taylor Fritz on Tuesday evening, Nadal will be eliminated in the semifinals in Turin and Carlos Alcaraz will become world No. 1 at the end of the year.

Auger-Aliassime withstood some early pressure from top-seeded Nadal and recovered from 15/40 to hold his serve in both the first and seventh games of the first set. The Canadian produced an accurate serve and hit the ball cleanly off either wing in key moments, saving five of five break points to improve his Green Group record to 1-1. He will take on Taylor Fritz in his final round-robin match in the Pala Alpitour as he attempts to reach the semifinals on his tournament debut.

“I am one win, one loss now. If I can get two wins then hopefully I can get through it so let’s see how it goes,” Auger-Aliassime said. “They’ll play it out tonight and I’ll be ready for Taylor in two days. It’s not going to be easy. He is playing very well this year and these conditions are perfect for him.

“I will use Toni’s experience [Nadal] in these situations. He has been a great help to me. I have tremendous respect for him and his family. It is special to play against Rafa with Toni here, but at the same time we are competitors and we are doing our best.”

The quality of Auger-Aliassime’s serving performance is reflected in his INSIGHTS Serve quality numbers for the game. He fired 15 aces and won 81 percent (39/48) of the points behind his first delivery in the hour and 57 minute encounter.

The 22-year-old was delighted to have beaten his childhood idol Nadal for the first time in three appearances. Auger-Aliassime had come close to feat in the pair’s most recent tour-level encounter at Roland Garros in May, but the legendary Spaniard eventually triumphed in a five-set epic.

“I wasn’t sure if I’d be here one day or if I could only dream about it,” Auger-Aliassime said. “The age difference is huge, and it proves what a champion he is and what an example, because he is still here at 36 years old fighting guys in their 20s. He’s a great champion and has a great attitude.”

Nadal looked set to make amends for his opening defeat to Fritz in Turin when he scored two break points in the opening game against Auger-Aliassime. But as so often during his late-season attack, the Canadian consistently produced big deliveries to escape.

Auger-Aliassime made little impact in second legs in the early stages and made his move in the eighth game, securing the only break of the set as his ability to score clean winners in the fast-paced conditions came to the fore.

The momentum stayed with the Canadian in the early stages of the second set and he turned up the pressure on Nadal with a break for 2-1. Despite some flashes of brilliance from the Spaniard, he was unable to dictate points regularly as Auger-Aliassime finished the game with 32 winners to Nadal’s 13.