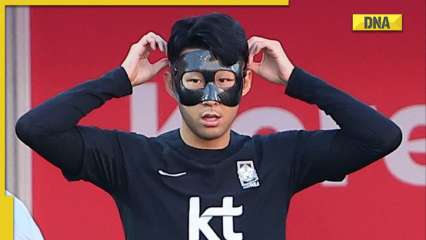 South Korean captain Son Heung-min is the country’s most famous footballer and plays for Tottenham Hotspur in the English Premier League. Uruguay is wary of Son’s threat. The sensational and skilled attacker was spotted wearing a peculiar face mask during training and also during the first group match against Uruguay.

Son’s unusual look has caught the attention of fans at the stadium and on TV. Many have wondered why the South Korean skipper is wearing the peculiar face mask.

Why is Son wearing a face mask at the World Cup?

The striker who has scored 35 goals for South Korea wears the mask as a protective gear to reduce the chances of facial injuries. The reason Son takes extra precautions to protect his face is to reduce the chance of further aggravating a recent injury from which he is recovering.

The Spurs star received a massive blow to the face after colliding with Marseille player Chancel Mbemba during his club team’s Champions League match against the French side on November 1.

Son injured his eye socket and suffered four fractures. He had to undergo surgery after several days and did not feature in Tottenham’s next three matches against Liverpool, Leeds and Nottingham Forest.

The mask he will be wearing during the 2022 FIFA World Cup in Qatar has been specially designed to minimize the chance of a facial impact during play. Previously, the young Croatian defender Josko Gvardiol was also seen wearing a face mask at the World Cup.

South Korea will take on Uruguay in their first Group H match on Thursday, November 24.