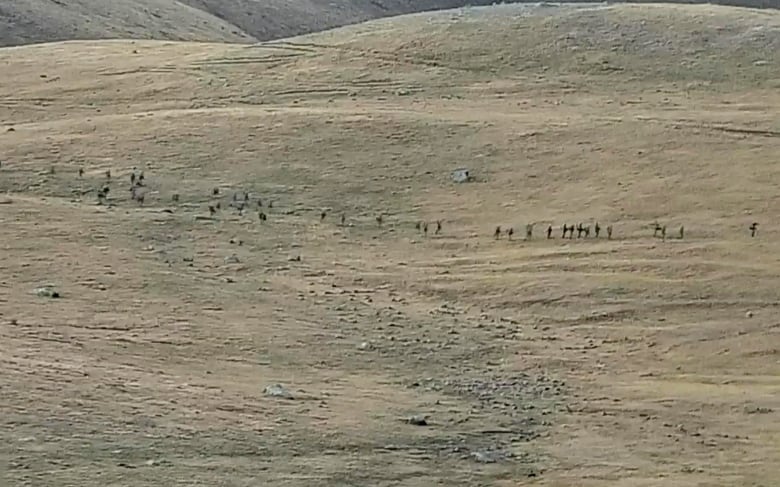 About 100 troops were killed in fighting on the border between Armenia and Azerbaijan on Tuesday, as attacks on both sides fueled fears that wider hostilities would break out between the old opponents.

Armenia said at least 49 of its soldiers were killed; Azerbaijan said it lost 50.

Azerbaijan’s foreign ministry said Monday and early Tuesday it would respond to a “large-scale provocation” by Armenia. It said Armenian forces have planted mines and fired on Azerbaijani military positions.

The two countries are embroiled in a decades-old conflict over Nagorno-Karabakh, which is part of Azerbaijan but under the control of ethnic Armenian forces supported by Armenia since a separatist war ended there in 1994.

Azerbaijan reclaimed large parts of Nagorno-Karabakh in a six-week war in 2020 that killed more than 6,600 people and ended with a Russia-brokered peace deal. Moscow, which has sent about 2,000 troops to the region to serve as peacekeepers under the deal, has tried to maintain friendly ties with both ex-Soviet countries.

The international community urged calm on both sides.

Moscow has engaged in a delicate balancing act, maintaining strong economic and security ties with Armenia, which hosts a Russian military base, while also working closely with oil-rich Azerbaijan.

Russia’s foreign ministry on Tuesday urged both sides to “refrain from further escalation and exercise restraint”.

‘Back to trying to build peace’

US Secretary of State Antony Blinken spoke with both Pashinyan and Azerbaijan President Ilham Aliyev. The US has a special envoy to the region, Blinken said, “and I hope we can take this from the conflict back to the negotiating table and back to trying to build peace.”

On Facebook, Aliyev expressed his condolences “to the families and relatives of our servicemen who died on September 13 while preventing large-scale provocations by the Armenian armed forces towards the Kalbayar, Lachin, Dashkasan and Zangilan regions of Azerbaijan.”

Turkey, an ally of Azerbaijan, also blamed Armenia for the violence. Turkish President Recep Tayyip Erdogan expressed his support for Aliyev, saying in a statement that Turkey and Azerbaijan are “brotherly…in all matters”.

The governor of Gegharkunik province, one of the regions under Azerbaijani shelling, said fighting had ceased for 40 minutes, apparently as a result of Moscow’s attempt to negotiate a ceasefire before it was later resumed. The governor, Karen Sarkisyan, said four Armenian troops in his region were killed and another 43 were injured in the shelling.

The Armenian government said it would officially ask Russia for help under a friendship treaty between the countries, as well as appeal to the United Nations and the Collective Security Treaty Organization, a Moscow-dominated security alliance of ex-Soviet countries.

Kremlin spokesman Dmitry Peskov declined to comment on Armenia’s request, but said during a conference call with reporters that Putin “did everything possible to help de-escalate tensions”.