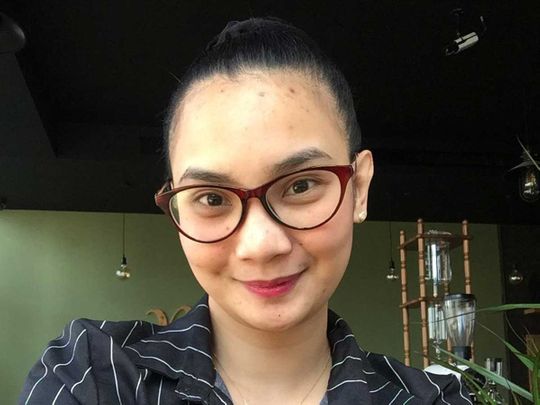 Dubai: Filipino expat Nina Elmina Sanchez, 32, just earned 1 million dirhams, but it was like any other ordinary day for her when she spoke to Gulf News after becoming a millionaire.

Sanchez, who works as a customer service associate for a five-star hotel in Dubai, won the grand prize of one million dirhams in the Al Ansari Exchange Rewards raffle that was broadcast live on January 12.

After confirming that she really won, she showed up for work on time – her shift is from 3pm to midnight – and dedicated herself to her tasks. Her colleagues, family and friends congratulated her; she was excited but there was no problem. “Winning the Dh1m award has yet to sink,” said Sanchez, who became the third Filipino expat and only the second woman to win the grand prize.

“Did I trade a bogus dollar?

“I actually thought (winning Dh1m) was just a joke and I wasn’t even able to answer Al Ansari’s first call around 1 p.m. Tuesday,” Sanchez told Gulf News , adding: “I was at the company accommodation and A colleague (hotel concierge) told me that a staff member from Al Ansari called and was looking for me. I didn’t know why – the first thing that came to my mind was: “Did I trade a bogus dollar?”

“The staff at Al Ansari called me back and the guy on the other end slowly and gently explained to me that I had just won a huge Dh1m. I was totally overwhelmed and the good news did not come immediately. I also did not know that the draw had taken place that day and I did not check it on social networks, ”she added.

Sanchez said she does not yet have any concrete plans on what to do with the big prize, but that she will certainly ensure a bright future for her 12-year-old son, who is in the care of his parents. in the Phillippines.

“The award is a great blessing to start the new year,” said Sanchez, who arrived to work in Dubai in November 2019. She added: “Last year has been really tough – like many others in the world. hospitality industry that were hit hard by the COVID-19 pandemic, I was also temporarily out of work for a few months. But luckily our hotel still paid our wages and I was able to send money home.

Sanchez continued. “I have only been in Dubai for over a year and the last thing I expected was to become a millionaire. What a great start to 2021! Thank you Al Ansari Exchange for giving me this opportunity and changing my life. She also thanked her kababayans (compatriots) who shared her joy and congratulated her on social networks.

Sanchez said she would take things in stride. “Yes, I’m a millionaire now, but I want to plan for my future and my family wisely and take things one day at a time so I don’t get too overwhelmed. I have already informed my family about the big victory but tomorrow I will still go to work as usual, ”she said.

Mohammad Bitar, Deputy Managing Director of Al Ansari Exchange, said, “To thank our loyal customers, we have continued our 7th Millionaire promotion. Congratulations to our new millionaire and to all of the winners. We were really overwhelmed this year by the number of participants.

The Bharat Express News - January 22, 2021 0
There was a magnitude 4.2 earthquake near Whanganui this morning, GeoNet says. Photo: Supplied / Geonet The earthquake that occurred...