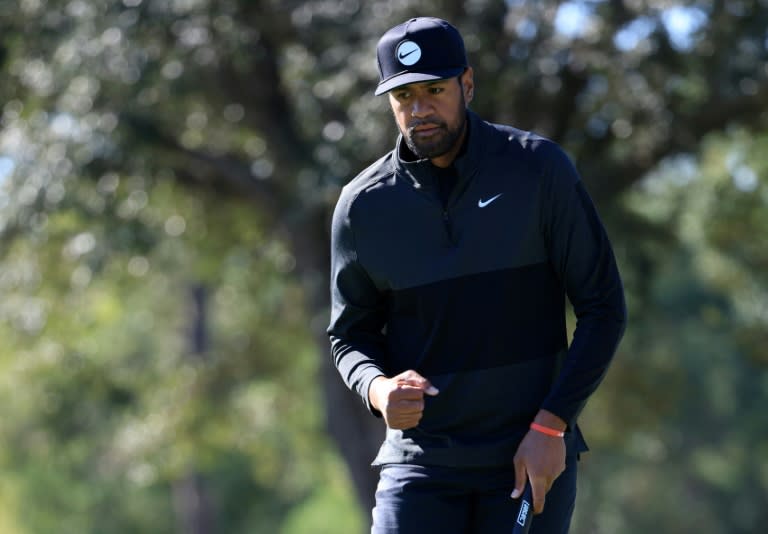 Tony Finau rode a steady course during Saturday’s heady Houston Open, firing a two-under par 68 to maintain a four-shot lead en route to the final round.

The 15th-ranked American, looking for a fifth US PGA Tour title, rolled in a 21-foot birdie putt in eighth and an 18-footer in 14th en route to a 15-under par total of 195, taking him four in for England’s Ben Taylor.

Taylor, who regained his tour card this season via Korn Ferry’s development tour, had six birdies in his five-under par 65 and rolled into a 21-footer on the 18th to get closer to Finau.

Saturday brought a dramatic change in conditions at the Memorial Park golf course in the wake of the storms that disrupted Friday’s second round.

Finau was one of those who managed to complete the second round on Friday, when his impressive 62 gave him a four-shot lead.

Given Saturday’s gusts of wind and cold temperatures, Finau thought his third lap might have been even better.

“That was a really good lap,” said Finau. “I don’t think the score says that, but I think I played better than yesterday. You know, yesterday I shot 62, but today I thought that 68 was pretty impressive given the conditions.”

Finau hit all 13 fairways and 16 of the 18 greens in the regulation and said the demanding conditions actually improved his concentration.

“I think it’s easier to play once at a time when it’s so hard,” he said. “The wind is blowing, you really have to focus on every shot, every putt, so I think I did a good job of that today.”

Taylor was delighted with his “very good round of golf” in the difficult conditions.

“There were a few shots – we played some of them 40 yards longer than the number and I think we did a good job balancing the wind and cool temperatures, calculating what both things would do to the ball .”

Taylor said that despite Finau’s big lead, the demanding conditions could open the door for others on Sunday.

“When you get conditions like that, anything can happen, right? There are some low scores today that would prove that, so I think we’re going to have a good Sunday.”

Taylor was three strokes away from a trio headlined by former world number one Justin Rose, who charted a 66.

Rose had to return early to complete his second lap when it was “really cold” but was happy to at least enjoy some warmer weather as the third lap progressed.

The 42-year-old, who has fallen to 75th in the world rankings after a season hampered by back problems, hopes to make a jump in Houston in 2023.

“I feel like I need to get my toe on the accelerator a little bit,” he said. “It hasn’t been the best year and the 2022-23 season is clearly underway and it’s time to make some points and get into it.”

My experience in a Linksoul LS2MAN tournament: Think surfer-casual with a competitive edge