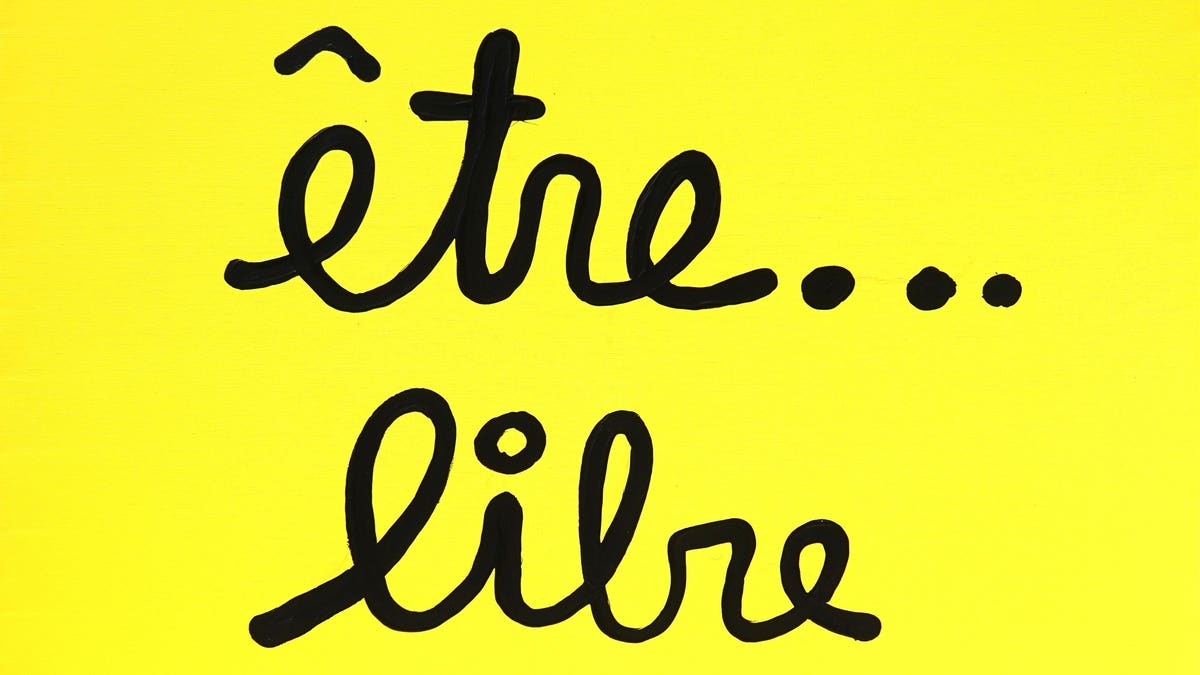 Always on the lookout for shock and novelty, self-taught French artist Ben Vautier has been shaking up the rules of contemporary art for six decades through his insightful and provocative painted writings. I sit down with him to discuss the origins and meaning of his art.

Last year, the Domaine Départemental de Chamarande, a castle located 45 minutes from Paris, organized a retrospective of your work entitled Be free (Be free). What does freedom mean to you?

I think you are not free today. There is less and less freedom: freedom of thought, freedom of speech. I can’t get on an elevator with a nice girl and say, “You look pretty. I would end up in jail. We are in a world where freedom is in danger. An artist has to want to be free and seek freedom because he has to think, “I have to do something new that others have never done before. Then he will do something new and he will feel free, but it is a compressed freedom. I like the phrase “be free», But I think it is very unrealistic. There are more and more restrictions.

How did you come up with the idea of ​​making paintings written or writings painted in 1958, using words to enter the world of art and instituting writing as contemporary art?

I was interested in abstract painting, so I thought Viseux was doing this, Poliakoff was doing this, Soulages was doing this, Malevich was doing this, Mondrian was doing that, and I said, “What can I do?” find that they didn’t? I discovered the shape of the banana, and said I would be the first to make bananas, so I made very simple bananas. Yves Klein told me that bananas were finished because a monochrome is stronger than a banana. A monochrome is like having four aces and a banana is just a full house. It’s good but it’s not strong enough. So I gave up the bananas and went to an exhibition where the other artists had put their paintings. I thought maybe I should just write, “Look at me, that’s enough. I put it on and everyone looked at it and laughed, and I was very happy. So I said that I would become the specialist in the truth and that I would write aesthetic truths: it weighs 20 grams, it weighs 15 grams. And then I will write subjective truths like “I am jealous of Boltanski” or “I am jealous of this, I am jealous of that”. And it worked. He had my personality. I became “Mr. Writing”.

Are you always looking for meaning and truth in your work?

Yes always. When I do something, I doubt. I am never sure of anything. Truth and doubt go hand in hand. I’m a little ashamed of myself because I repeat myself. I once wrote: “If an artist repeats himself, it is as if he is copying another. So I don’t have to repeat myself, but I repeat myself. It’s not good, but it’s hard to be someone else every day. It’s impossible. You cannot reinvent yourself every day.

You were one of the first in Europe to bring art straight to the streets with your performances entitled Gestures in the 60s. What were you trying to achieve?

Yes it is, but at the same time it was not intentional. We didn’t have galleries in Nice and I decided to write on the walls. There was a very nice white wall somewhere and I went there at night and wrote wall “Wall”(Wall) on it and flees. Then I wrote “mom“(mother and”dad(Father) on the other walls. It was interesting to me, but I didn’t do it with street art in mind. I did it naturally and, to be honest, when street art came along, I liked it, but not too much. I met Henry Flynt in New York, a very important man. He took me to the Bronx, where he showed me some street art, which I didn’t really like, but I bought two pieces. He told me he was taking pictures of someone writing sentences on New York walls, then he found out that this man was Basquiat, who signed by another name, Samo. I was interested in street art and Basquiat, but I was not interested in the metro. Everything was hidden, but it didn’t bring anything new. It comes down to the same thing: whatever your style, you have to do something new.

You are a keen observer and analyst of society, and your provocative and insightful words question, challenge, shake up our reality and our habits. How do your works remain relevant to this day?

I do not see that I am developing so much. I am more curious. I’m looking at something and think it may or may not be art, has anyone done that? If no one has done it before, how could I present it? My big theory is the ego. Today, I am a philosopher in ego. I have a book called The Theory of the Ego (The theory of the ego).

You have always said that there is no art without ego …

No art without ego, but I have become a much bigger philosopher because I think there is nothing alive that is alive without ego. My cat is selfish and this plant is selfish because everything wants to survive. If you watch the new nature movies, you find that nature is full of fights. They spend their time fighting and eating each other.

Why is the ego so important to be an artist?

The ego is there even if you are not an artist. The ego is when everything is alive, but an artist, to find something new, has to look at what has been done before and say what he can do that has not been done before. An entrepreneur, a factory worker, a financier, a journalist, all must have ego. I am interested in the ego. He tries to explain the beginning of the universe because I accepted the idea that all artists are selfish, all mankind is selfish, all animals are selfish, all microbes are selfish. So where does the ego stop? Should he be alive? I thought maybe at the beginning of the universe, thousands of millions of years ago, they must have been in some kind of boring situation and the ego started. This is my personal theory. I wanted to introduce him to Hawking, but Hawking is dead. It’s kind of an extrapolation, but it might work if I can get the ego into the matter. The coral or the animals are full of ego because everything that reproduces is ego, but the world itself, the volcanoes are not full of ego. I don’t have the proof, but I will have the proof. I have to find a theory in which I can prove that the ego is from the beginning of the universe, but it’s complicated. My last work is on this.

The Bharat Express News - September 20, 2021 0
In the last episode of "The Jim Cornette Experience", Jim Cornette and Brian Last reacted to the Dark Side of the Ring episode of...