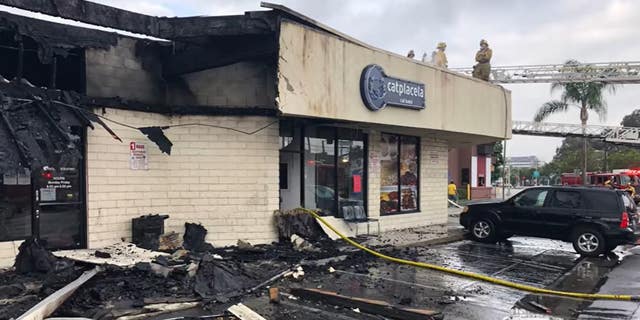 A massive fire at a strip mall in the Los Angeles area killed 17 cats and injured a firefighter Saturday morning.

The Los Angeles Fire Department responded to a structure fire in the 9000-block of West Venice Boulevard around 5:44 a.m. Saturday after a person driving through the area called 911 to report the flames.

When the first 124 members of the LAFD arrived at the address, they saw smoke billowing from the central portion of a one-story strip mall with about a dozen businesses.

In what was described as an intense 73-minute firefight, crews forced entry and searched many of the businesses in the building, including cat boarding house CatPlaceLA.

Firefighters removed 19 cats from the charred facility, but 17 of them were reported to have been unable to provide medical assistance and died on the spot. The two remaining cats were taken to an emergency vet after the crew were able to resuscitate them.

The department said a firefighter contracted “sudden medical illness” while fighting the blaze and was taken to hospital in fair condition for further examination.

No other injuries were reported in the fire.

A Los Angeles firefighter battles a fire in the Palms neighborhood of Los Angeles on September 17, 2022.
(Los Angeles Fire Department)

Although most of the building was filled with thick smoke from a shared attic, most of the direct fire damage was confined to five businesses: a nail salon, smoke shop, martial arts studio, employment agency and CatPlaceLA.

ALSO READ  Matt Gaetz: 'My Son Hunter' Is A Must See, 'Breitbart Nails It'

LAFD said none of the companies involved were equipped with operational sprinklers.