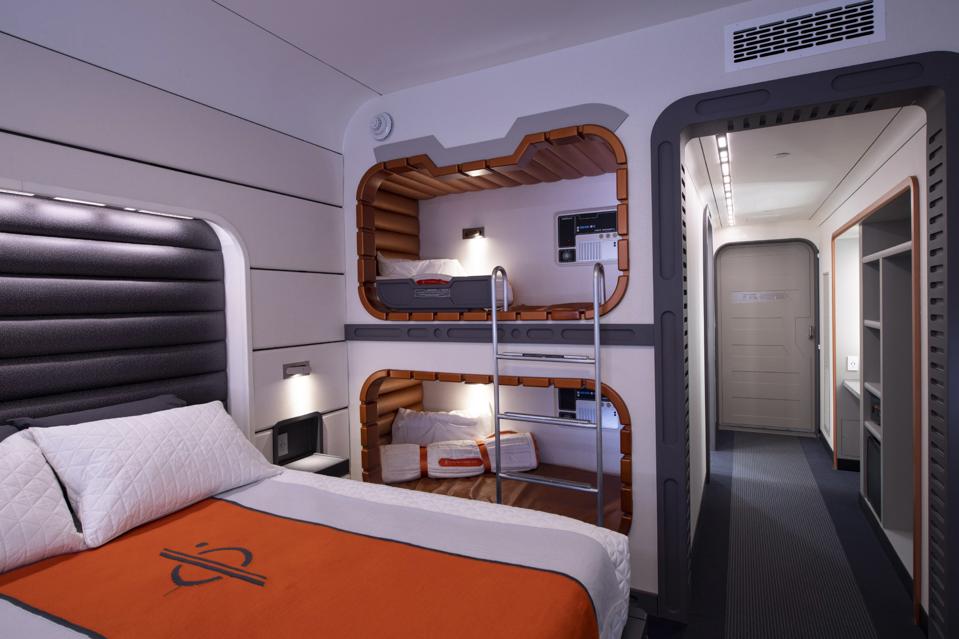 Disney has posted photos of its highly anticipated “Star Wars”-themed Galactic Starcruiser resort, which is slated to open next year at Walt Disney World Resort in Florida.

This one-of-a-kind resort experience promises an ultra-deep immersion in the “Star Wars” universe.

Expect a cruise-like experience, where guests arrive and depart together at the Galactic Starcruiser Terminal and live aboard the mythical Alcyon for an immersive stay of two days and two nights. On board, guests will stay in ship-like cabins, experience on-board meals, and interact with cast and crew. Each window of the starcruiser offers ever-changing views of the galaxy as the ship progresses from location to location.

With this new project, Disney further cements its good faith as the master of suspending belief through the magic of simulation technology. “You will be prompted to enter a Launch Pod for transportation to space,” according to the Disney Parks blog. “Through the windows above, you will see yourself abandoning the real world by jumping into hyperspace and getting closer and closer to the real world. Alcyon. After docking with the Halcyon, the pod airlock opens with a whoosh and you will enter the atrium of the ship’s main deck.

Not everyone will share the same experience aboard the Alcyon ship. Essentially, guests can choose their own adventure based on the decisions they make during their stay. This may include the use of a lightsaber, the spaceship deck tour, and a planetary excursion to Batuu at Star Wars: Galaxy’s Edge at Disney’s Hollywood Studios park.

“Star Wars: Galactic Starcruiser is a whole new kind of experience,” Ann Morrow Johnson, executive producer of Walt Disney Imagineering, wrote in a blog post earlier this year. “You will be living aboard a star cruiser, and you can immerse yourself in the greatest story of Star Wars.”

Even with delays and closures during the Covid-19 pandemic, Disney remains eager to launch the Star Wars: Galactic Starcruiser hotel experience in 2021.

“Our industry is suffering,” said Josh D’Amaro, president of Disney Parks, in his virtual opening address earlier this week at an event hosted by the International Association of Amusement Parks and Attractions. “It hurts the presence of Covid-19 in our communities. But unlike some industries affected by the pandemic, our industry is here to stay and it is here to grow.