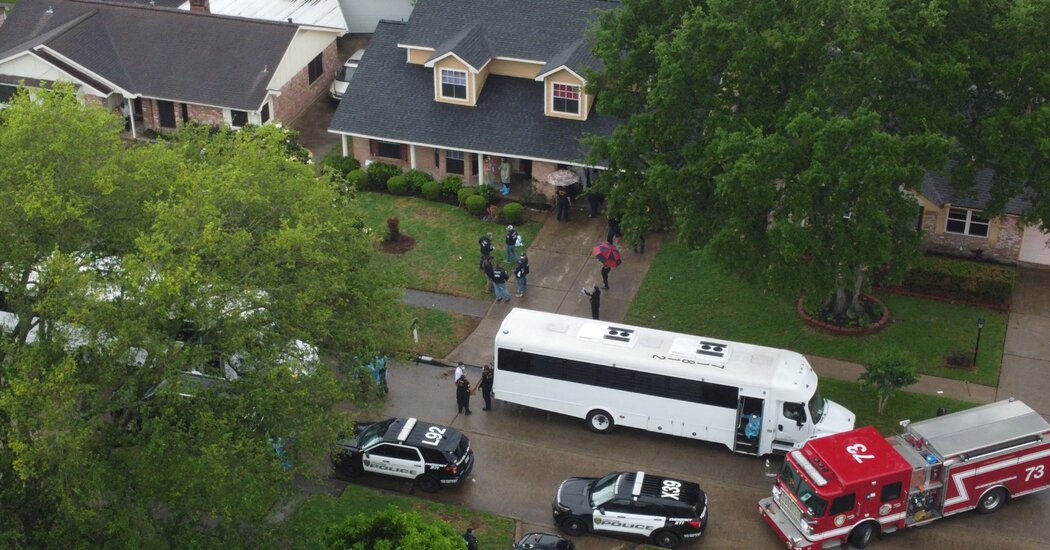 A criminal complaint filed Saturday in US District Court for the Southern District of Texas said Marina Garcia-Diaz, 22, of El Salvador; Henry Lincona-Larios, 31, from Honduras; Kevin Lincona-Lopez, 25, from Honduras; and Marco Baca-Perez, 30, and Marcelo Garcia-Palacios, 21, both Mexican, were arrested on Friday.

They face charges that they “harbored, concealed and protected” undocumented immigrants for “business advantage or private financial gain,” according to a statement from the office of Jennifer B. Lowery, the acting US lawyer. .

A preliminary hearing is scheduled for Wednesday, their lawyers said.

Alejandro Macias, who has said he represents Kevin Lincona-Lopez, said in an email that his client “has not been charged and is presumed innocent”. Lawyers for the other defendants declined to comment or could not be contacted immediately on Tuesday.

The defendants each face a maximum sentence of 10 years in prison and fines of up to $ 250,000 if convicted, the statement said.

The group of people were discovered in a two-story house in southwest Houston on Friday. Houston Police Department Deputy Chief Daryn Edwards said police received information about a possible kidnapping, which led them to the house, where officials found them “huddled together.” They appeared to be between 20 and 30 years old, he said.

He said the scene struck him as “more of a smuggling, not a smuggling affair”.

Police received a 911 call from a woman on Friday who said her brother had been kidnapped, according to an affidavit. She said she “paid $ 11,000 in February to human smugglers” to bring her brother from Honduras to the United States. He was then told to drive from Dallas to Walgreens in Houston to pay smugglers an additional $ 6,300 for his release, according to the filing.

On the way, the woman received a call. His brother was implicated and he said repeatedly, “Please help me,” according to the affidavit. Then a man called the woman and told her her brother would be killed unless she handed over the money, he said.

She called Houston Police, who used geolocation data to find the cell phones that were used to make the calls, and that information led them to the house, according to the affidavit. After observing the house, authorities, using a search warrant, found “about 97″ people crammed into two locked rooms, and seized cash and house books containing ” human trafficking payment records, ”the affidavit states.

All of the people in the group, which included about five women, were undocumented and came from Mexico, Honduras and El Salvador, according to the affidavit. Authorities tested them for coronavirus, he said. Police said some had shown symptoms of Covid-19.

Some told authorities they had been beaten if they weren’t silent, or threatened with death if their relatives did not pay, according to the affidavit. One person was threatened with being put in “4 pieces of wood,” which he took to mean a coffin, he said.

With the rise in violence, can a nicer prosecutor keep their seat?