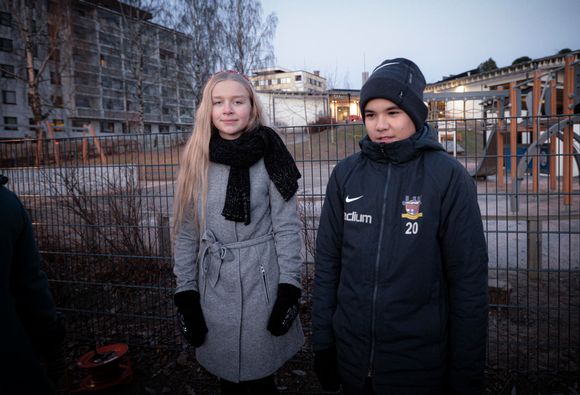 For the first time in Finland, flags were raised to commemorate Universal Children’s Day on Friday.

Saimi Harju and Samuel Kähäri, sixth-grade students from Puistokoulu School in Jyväskylä represented children from all over Finland at the country’s first celebration of the children’s rights flag.

The students as well as the Ombudsperson for Children and representatives of the National Strategy for Children and the city of Jyväskylä participated in the event organized in accordance with the current health and safety guidelines. The rest of the country could tune in to the festivities through a live stream broadcast on the official Finnish government Youtube channel.

Universal Children’s Day commemorates the adoption of the United Nations Convention on the Rights of the Child on November 20, 1989. In Finland, the day has been on the calendars since 2002.

President Sauli Niinistö, Prime Minister Sanna Marin and Speaker of Parliament Anu Vehviläinen spoke to children across the country on the show.

“When we asked children and youth about the important things in life, many mentioned the importance of a safe, responsive and confident adult. It’s a serious message. It’s the job of the children. adults to bring security and understanding, ”Niinistö said.

In her video greeting, PM Marin said Finland is developing its first national child strategy which aims to ensure that the rights of all children are realized.

“Based on the responses to the strategic survey, children want to ensure a safe daily life for all. This means, among other things, that no one should be bullied or discriminated against,” Marin said.

According to President Vehviläinen, it is the duty of every MP to think about the effects they have on the lives of children when they make decisions.

The show also included a performance by hip-hop artist Elastinen, recorded specifically for the event.

Finland currently has seven annual official flag days. In addition to these dates, Finland flies flags on election days, when the president is invested and usually to mark many other occasions.

The Bharat Express News - November 27, 2020 0
Those in a rush will love the feature-packed Hotpoint Washing Machine, which can wash a full load of laundry in just half an hour...