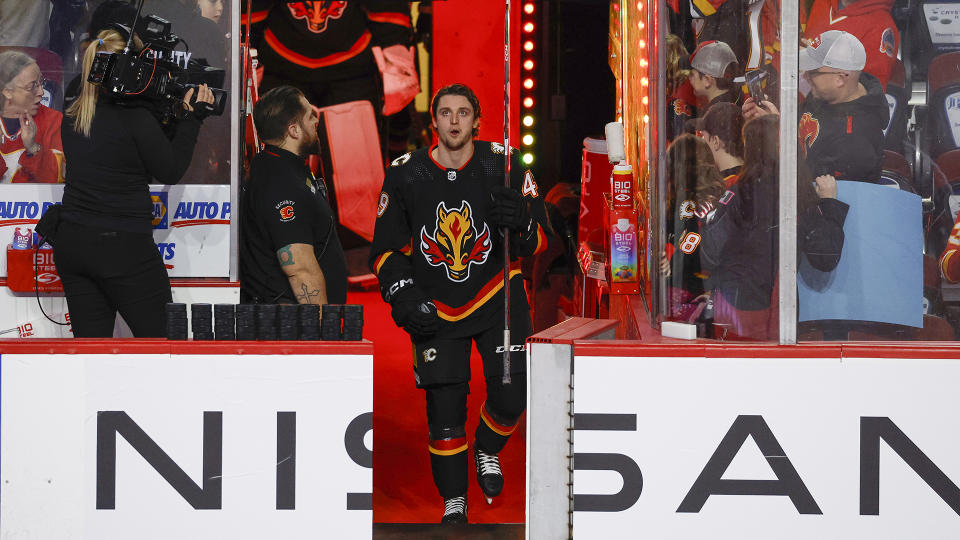 Many Calgary Flames fans were mesmerized as they witnessed intriguing forward Jakob Pelletier’s NHL debut on Saturday. If Flames coach Darryl Sutter shares some of that excitement, he has a funny way of showing it.

Following the Flames’ 6–3 victory against the Tampa Bay Lightning, Sutter was asked about Pelletier’s debut. In a moment that could be infuriating or entertaining (depending on who you ask), Sutter played coy and asked for Pelletier’s jersey number. Sutter then read off the rookie’s simple count stats, such as one shot on target and 6:43 time on ice.

When the Flames convinced Sutter to jump off his tractor and put the team on a more stable path, many geared up for the return of wayward press conferences. While Sutter doesn’t match John Tortorella’s cantankerous energy, he certainly has his moments of wit and grumpiness.

Memorably, Sutter hoped Johnny Gaudreau would have “more energy” in his 500th NHL game than his 499th.

Depending on how you read between the lines, Sutter appeared to be firing some farewell shots after Gaudreau and Matthew Tkachuk left town. At least, that’s how it felt when Sutter gave rave reviews about Jonathan Huberdeau’s hitting skills or when the 64-year-old coach made a cold comparison between Tkachuk and Tyler Toffoli.

In a sport that often craves personality and honesty, it can be refreshing and funny, especially when some classic bathroom humor is involved.

Some Flames fans, media not too amused by Sutter’s Pelletier comments

Admittedly, it certainly looks like those barbs are getting tougher when targeting young players. Some will consider it all counterproductive.

Darren Haynes even went so far as to describe Sutter’s actions as “immature.”

Sportsnet’s Eric Francis captured part of the mood by noticing Sutter didn’t seem to share the city’s excitement for Pelletier.

Perhaps the best energy is somewhere between Sutter’s sarcasm and the most breathless expectations about Pelletier, who was the 26th pick of the 2019 NHL Draft and is considered one of their best prospects.

Could Pelletier be the “solution to the Calgary Flames’ top six problems”? That’s probably too much to ask of a 21-year-old who clearly has yet to gain his coach’s trust.

Perhaps he can boost the Flames’ depth, in subtle and undeniable ways. After nearly a point per game in the AHL last season (62 points in 66 games), Pelletier produced 15 goals and 34 points in 31 games this year before being called up.

As limited as his ice time was on Saturday’s debut, Pelletier managed to make a positive impact. Note, for example, that the Flames generated three high-risk opportunities when Pelletier was on the ice, not giving any away themselves. Considering how defensive Sutter can be, it’s a nice way to thaw a coach’s cold heart.