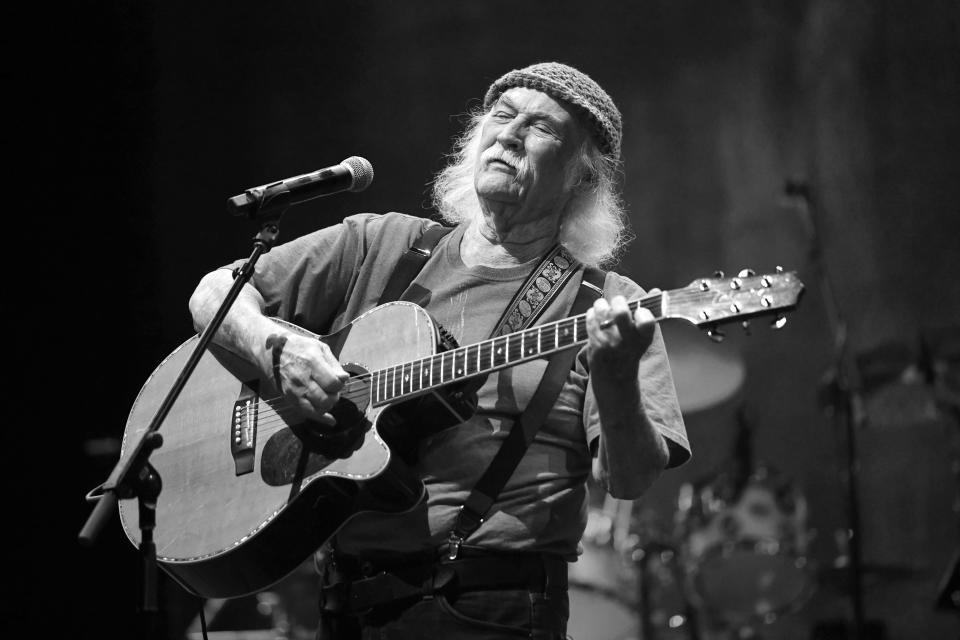 David Crosby, one of the architects of the 1960s folk, psych and country rock scenes as a founding member of both the Byrds and Crosby, Stills & Nash, and one of the most influential singer-songwriters of all time, has passed away . The two-time Rock & Roll Hall of Fame inductee was 81 years old.

“It is with great sadness after a long illness that our beloved David (Croz) Crosby has passed away,” read a statement released Thursday by Jan Dance, Crosby’s wife to whom he has been married for 36 years. “He was lovingly surrounded by his wife and soulmate Jan and son Django. Although he is no longer here with us, his humanity and kind soul will continue to guide and inspire us. His legacy will live on through his legendary music. Peace, love and harmony to all who knew David and those he touched. We will miss him very much. At this time, we respectfully and kindly ask for privacy as we grieve and try to cope with our profound loss. Thank you for the love and prayers.”

David Van Cortlandt Crosby was born on August 14, 1941, in Los Angeles, into a privileged family that included his father, the Oscar-winning cinematographer Floyd Crosby. In 1964 he formed the pioneering folk rock band The Byrds with Gene Clark, Michael Clarke, Chris Hillman and Roger McGuinn; while his tumultuous time in the group lasted only three years, his alternate guitar tunings, angelic harmonies and unique phrasing formed the basis of a classic California sound that influenced dozens of musicians for decades, including Tom Petty, Robyn Hitchcock, Big Star and R.E.M. Among the Byrds songs Crosby co-wrote included “Eight Miles High,” “Renaissance Fair,” “Mind Gardens,” “Lady Friend,” “Everybody’s Been Burned,” “Dolphin’s Smile,” “Why,” “I See You, ‘ and ‘It happens every day’.

Ironically, Crosby’s firing from the Byrds was in part due to an incident when he joined Buffalo Springfield onstage at the 1967 Monterey Pop Festival, filling in for an absent Neil Young, but that opened the door to his next project, founded in 1968: the supergroup Crosby, Stills & Nash (sometimes Crosby, Stills, Nash & Young) with Stephen Stills of Buffalo Springfield and Graham Nash of The Hollies. Among the songs Crosby co-wrote in CS&N(Y) were “Guinnevere,” “Almost Cut My Hair,” “Long Time Gone,” “Delta,” “Wooden Ships,” and “Déjà Vu.”

Crosby, Stills & Nash’s self-titled debut reached No. 6 on the US album chart and went on to go quadruple platinum, and CS&N won the Grammy for Best New Artist in 1969. That same year, they played their second concert – and their first with new on/off member Neil Young — in front of 500,000 revelers at the Woodstock Festival. The subsequent CSN&Y albums Déjà Vu and live LP 4-way street both went to number 1 and sold a total of 11 million copies, but Crosby’s personal problems, including a heroin addiction that developed after his girlfriend Christine Hinton was killed in a car accident, led Crosby to part ways with this group as well.

Over the years, Crosby participated in several reunions with both the Byrds (in 1972-73) and CSN&Y, most notably with the latter at Live Aid in 1985, several Bridge School Benefits, and full tours in 2000, 2002, and 2006. Crosby, Stills & Nash’s performance took place in 2015 at an ill-fated National Christmas Tree lighting ceremony in Washington, DC, after which Nash announced that CSN&Y would never perform together again due to an argument with Crosby. In recent years, however, Crosby has expressed a willingness to consider another reunion.

Crosby’s highly publicized personal and legal issues often overshadowed his impressive body of work. For example, his nine-month prison sentence in Texas on several drug and gun convictions, his 1994 liver transplant, and the 2000 revelation that he was the sperm donor to Melissa Etheridge’s two children made headlines. But throughout his career, Crosby also recorded eight critically acclaimed solo LPs, as well as two studio albums with CPR, a jazz rock band he founded with session guitarist Jeff Pevar and keyboardist James Raymond, the latter being his son who was placed for adoption in 1962 and with whom Crosby reunited in the ’90s. In 2014, Crosby released his first solo album in 20 years, Croz, recorded in Raymond’s home studio, and that project unexpectedly rekindled his creativity. Between 2014 and 2021, Crosby released four albums, most recently from 2021 Free.

Speaking to Yahoo Entertainment in 2019 to promote its Cameron Crowe-produced, warts-and-everything documentary David Crosby: Remember my name, Crosby seemed more surprised than anyone at his late-life career resurgence, saying, “I should be walking hand-in-hand with my wife into the sunset. But I am not. I’ve made four records in the last four years. I’m full of songs. I am full of life. I’m having a good time. I sing as well as I’ve ever sung in my life. I write very well. I have a lot of great writing partners. The music just flows out of me. So that’s a deviation. That is really an unusual circumstance. …I had built up some steam, because the last 10 years when I was at CS&N, we weren’t really friends, and I didn’t feel like I could take songs with me. But I actually think more about the people I’ve worked with: Michael League, my son James Raymond, Becca Stevens, Michelle Willis. … They’re the best writers I can find in the world, and that’s some inspiring material, man. That brings out the very best in me. I like what I do. I love making music, but I love even more to work with someone who thinks of things I never thought of myself.”

ALSO READ  Harrison Ford would like to do a project with wife Calista Flockhart, but they haven't found one yet

In that same Yahoo Entertainment interview, Crosby, then aged 77, said he was “a little baffled” that, despite his many drug and health problems, he had outlived so many of his peers, admitting he had “survivor guilt”. … It’s not just that they were my compatriots. They were mine friends. Greenhouse [Elliot] was perhaps one of my best friends in my life. Janis [Joplin]Jimi [Hendrix] – really good friends. Those are the first three that come to mind, but there were many. You wonder, “Why me?” I don’t have an answer to that, but I think the answer is, “Okay, I don’t know why, but I’m here.” So if you get the life to do something with it, do something worthwhile.”

Crosby is survived by his wife, Jan Dance; James Raymond, his son with Celia Crawford Ferguson; his two daughters from respective relationships with Jackie Guthrie and Debbie Donovan, Erika and Donovan Crosby; and his son with Dance, Django Crosby.