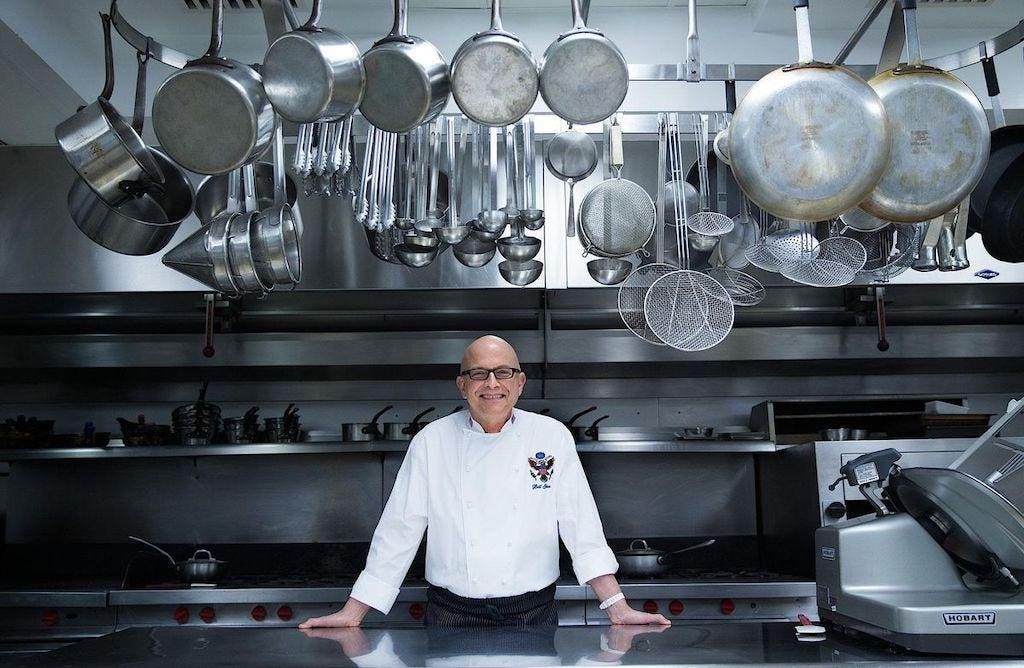 Bill Yosses fulfilled this culinary role during the administrations of George W. Bush and Barack Obama. Now in late 2022, Yosses will serve in a “Centennial Confectioner Residency” at the Hamilton Hotel and will participate in two culinary events in December.

On Thursday, December 8, from 5-7 PM, Yosses will be hosting a baking class at the hotel titled “Sweeten the Season.” Guests can chat with Yosses at a post-event meet and greet. He will also be signing copies of his latest book, “The Sweet Spot: Dialing Back Sugar and Amping Up Flavor.”

For Hamilton Hotel’s annual hot chocolate table, December 12 through December 16, 2022, Yosses will share the history of chocolate and sweet facts about the chocolate-making process. He will also share some holiday recipes.

In 2006, Yosses moved to our nation’s capital and lived one block away from the hotel on McPherson Square in downtown Washington, D.C.

“I was contacted by the hotel when they were planning their 100th anniversary,” said Yosses. “I was connected to the White House and to the history of the area. And I’m a history buff myself. So also on a personal level, I was very flattered to be asked to participate in this particular residency.”

His residency at the Hamilton Hotel began in early November 2022. To mark the occasion, Yosses created a miniature Scottish Dundee cake as a turndown amenity for all hotel guests staying on-site on the night of November 1.

“The guests were given one when they checked in,” Yosses added.

Yosses has a lot of experience baking for guests. He served as White House Executive Pastry Chef from 2007 to 2014. He succeeded his predecessor, the late Roland Mesnier, who served in this position for just over 25 years and five presidents. Roland Mesnier retired in 2004.

Being considered for this job came as a bit of a surprise to Yosses. He said he was contacted for the position and then took part in a baking trial when he added that he was chosen for the job.

Yossess explained that his duties as White House Executive Pastry Chef included planning and preparing desserts for occasions ranging from presidential banquets and state dinners to daily meals for the presidential families.

In his seven-year role, Yossess said his biggest challenge was not repeating dessert. “Each event had an original dessert in some way,” he recalls. “It was modified to be personalized for the people who were coming that day. So you have to stay very creative, get a lot of input, [and] do a lot of research.”

For Yossess, his biggest test would be presidential state dinners. “You want to satisfy the visitor, and their idea of ​​what a dessert could be, but you also want to be attentive and considerate of the American repertoire of desserts. So often we combined traditional American desserts with an ingredient from the visiting country.”

In the White House, he worked closely with Michelle Obama’s Let’s Move initiative to improve health outcomes related to food issues and was responsible for managing the First Lady’s South Lawn garden.

Yossess now lives in New York and is currently the chief nutrition officer of One World One Kitchen. He also works at Stone Barns Center for Food & Agriculture where he is involved in educational trips and workshops focusing on healthier eating choices for children.

In addition to this partnership with Yossess, Hamilton Hotel is offering a Centennial Celebration Package with rates starting at $19.22 – a tribute to the property’s opening in 1922. Rates start at $19.22 for the first 10 bookings and then $100 for the next 20 bookings. It also includes complimentary birthday cake martinis from the on-site restaurant, Via Sophia, and a glass of bubbly upon check-in.

How to travel to Greenland