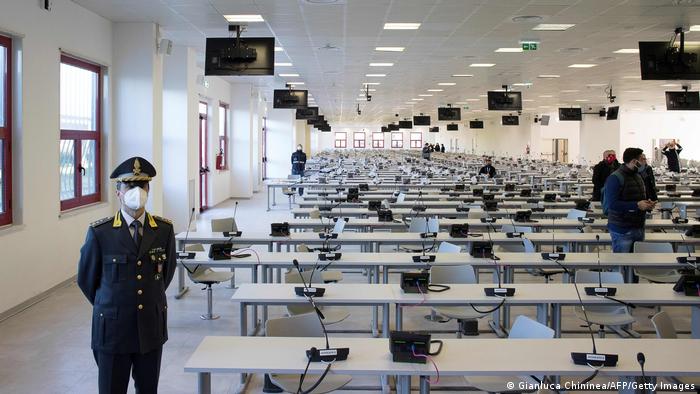 Forty-nine-year-old Luigi Bonaventura was sitting in an empty restaurant in Bologna. He wasn’t saying where he had traveled from, just that he had spent several hours on a train. He wants no one to know where he lives. He started working with authorities in 2006, turning his back on organized crime – and his own family. So far, his collaboration has helped put up to 500 ndrangheta members behind bars, and he is in constant danger of retaliation. Nervous and exhausted from his journey, he caught his breath, drank some water, began to speak and didn’t stop. The crimes of his past come to him in his sleep. “The next day,” he said, “I wake up and say to myself: I have to fight and get better.”

On Wednesday, a trial began against 350 suspected members of the ‘ndrangheta, one of Italy’s most powerful criminal networks. The trial is expected to last two years in Lamezia Terme, in the southern region of Calabria. The suspects include lawyers, politicians, businessmen and more hardened criminals.

Bonaventura knows a lot of them personally. He said it was particularly difficult for the authorities to keep the ‘ndrangheta under surveillance: the members roam freely in the shadows. It is less an organization than a loose network of individuals and families who live by their own conventions and sometimes turn against each other. Although the patrons are concentrated in Calabria, the ‘ndrangheta is active across and in Italy – and well beyond the borders.

The ‘ndrangheta used to make their money from kidnappings, but later expanded into the construction industry, frequently landing lucrative state contracts and international drug trafficking. The network is suspected of smuggling cocaine from Latin America to supply much of the European market. Some of the suspects tried in Calabria have been arrested in Germany.

Bonaventura’s grandfather, Luigi Vrenna, was an important leader of ‘ndrangheta, and he was expected from the start to be part of the tradition. His father turned him into a “soldier” when he was still a child. His toys were real weapons. He learned to shoot and kill animals and to resist pain to get used to violence. “You don’t have a childhood,” he said. When he was old enough, his family sent him to other regions to learn about local customs and dialects. He had become a “sleeper agent”.

He was recalled to Calabria in the 1990s because a war had broken out between the families. Bonaventura has become an “active soldier” involved in blackmail, drug trafficking and murder. He spoke openly about this time. He said he had never killed anyone innocent, using the war analogy to justify his actions. He said he got revenge on another family after the murder of a child of his own.

These close family ties made it difficult for the police to fight the ‘ndrangheta. Few members have the courage to leave and testify against their own loved ones. But Bonaventura made the decision to do so after the birth of his second child and with the support of his wife. He chose to cooperate with the authorities, who have since arrested hundreds of his former associates. He spent 10 years in prison. After his release, he and his wife formed an association to protect other informants. They want to encourage members of Parliament to do the same and they want the government to provide more support for people leaving organized crime.

ALSO READ  How Europe's lockdowns stack up against Britain

Bonaventura said the ‘ndrangheta had taken a new course. The bosses no longer train their children to become killers but rather invest in their education so that they become “economic criminals: bankers and lawyers”. He hopes that the ongoing trial will shed light on the practices and organizational structures of the ‘ndrangheta.

“I had given up on my dreams and wasted my energy because I didn’t think there would be an end to ‘ndrangheta,” Bonaventura said, “but maybe something can change with this trial and work. prosecutors. “