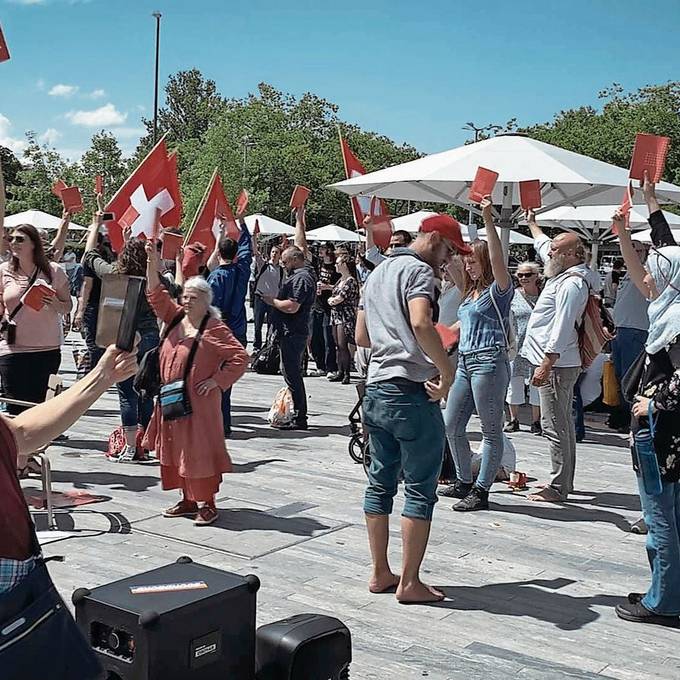 The movie “Unheard of” is seen. Reto Brennwald’s documentation has been viewed approximately 436,000 times since it was published three weeks ago on the Vimeo video platform.

How to explain this success? The film is a haunting critique of the government’s and media’s handling of the First Corona Wave. The virus is touted as more harmless and the countermeasures – particularly lockdown – as worse than previously thought. The media is blamed for allegedly missing voices from doctors and coronasceptic experts. The film thus reaches a loyal fan base. It has been celebrated in the relevant forums of corona skeptics. But 400,000 views cannot be explained by this single niche audience.

Corona skeptics and the Brennwald factor

Brennwald says: “400,000 views show me that there is clearly a lot of interest in critical viewing that goes far beyond the so-called corona skeptics.” In fact, sender Brennwald is likely to have made the film reach some of its previous audiences as well. In the 90s, the man with the distinctive face was a leading figure in Swiss television. He first worked for the “Rundschau” and, from 2007, for the “Arena”. With his deep voice, which had once helped him to make a career in “Radio 24”, he then took the viewer on travel reports or introduced strange personalities in doc-films. He left his post as moderator of “Arena” after criticism arose that he preferred the SVP. “Teleblocher am Leutschenbach”, wrote the “NZZ”. This accusation also makes Brennwald popular with that segment of the public for whom Swiss television is too leftist.

ALSO READ  The Federal Council paralyzes leisure life: what can we still do? The eleven most important decisions

Today, he continues to host the niche program “Viewpoints from the Sunday Newspaper”. He is now independent. Brennwald was not available for a detailed discussion of reactions to his film and his assessment of the current situation. He would prefer a factual debate about “how we can get through the crisis now” and not about himself, who has recently been “too central”. There’s one thing in particular that Brennwald doesn’t want to talk about anymore. It’s around Friday October 23. At that time, the film premiered at an event hall in Dübendorf. This was followed by a discussion with Daniel Koch, coronasceptic family doctor Christoph Schmidli, director of the professional association Hans-Ulrich Bigler and comedian Stefan Büsser, who belongs to the risk group due to lung disease. .

The nasty whistles against Daniel Koch

New Brennwald fans have come in droves. And some of them didn’t want to be told when and in what voice they could speak, nor did they meet the mask requirement. Daniel Koch was booed over and over and comedian Büsser was interrupted by a heckling. Brennwald was clearly uncomfortable with this. “Not like this!” He once told the audience, and when one of his guests was interrupted again: “I would like to listen to him.”

ALSO READ  A tunnel order is placed with a Russian company: the local industry looks in the tunnel

After the discussion in Dübendorf, Brennwald kept his distance from the rowdies. He had little fear of contact beforehand, even with provocative characters. On his YouTube channel, for example, he had a conversation with a blogger who called for the Federal Council to be put in prison. Brennwald distanced himself from the man’s extreme individual attitudes in the conversation, but released the sensational video under the headline “Does Federal Council Belong to Prison?”. On September 19, he enjoyed the applause at a coronavirus demonstration at Turbinenplatz in Zurich and asked for donations for his film.

The estrangement from his fans became evident. Because even before the premiere of the movie “Unheard of”, Brennwald started rowing. He therefore distanced himself from Marco Rima during a preliminary interview with journalists to whom he showed the film before the premiere. The comedian has a prominent appearance in the film. Brennwald pointed out that Rima’s interview was taped on a radio show with Roger Schawinski before Rima made his comments. In Schawinski’s case, Rima scolded against wearing a mask and relativized the corona deaths in reference to the excessive birth rate. When asked what he would do differently today, Brennwald replied that he would interview Rima in more detail and more critically. Brennwald also did not want to criticize the lockout measures that the cantons of Geneva and Valais had taken shortly before the premiere.

Today, he is refraining from further screenings of his film – although that would still be possible on a small scale. “At the moment, we’re encouraged to social distancing, and I’m sticking to it,” Brennwald wrote via email. In any case, only a few additional demonstrations were planned.

Is it opportunism or is there more?

You might dismiss Brennwald’s growl as opportunism: When he still needed donations and attention for his film, he took a cuddling class with the Crown Skeptics. The thing in the box and the donations on the account, he distances himself. But this explanation is probably too simple. Anyone who argues with Brennwald recognizes the doubt in him. According to his own statements, he was one of the first to wear a mask when shopping in the store. But he quickly questioned such measures. When he expressed his doubts on Facebook, he was attacked there, which made him make the film even more.

Before the film’s release, the tide has turned. Protective measures have become fewer, infections more. The film’s position that a new lockdown must be avoided has meanwhile become the doctrine of the Federal Council. Instead of rejection, Brennwald goes up in favor. It is quite possible that the journalist again doubted.

“Professionals who make money with it”: Ruedi Noser fears the militia system

SRG ombudsmen after criticizing the late night show: this ‘Deville’ show was more than satire