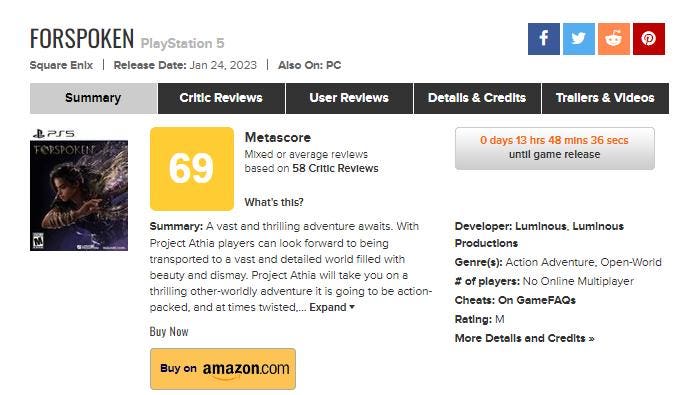 As I mentioned earlier, red flags about Square Enix’s Forspoken have been flying left and right lately. The demo was not very well received and required its own patch before release. The game’s PC specs were ridiculous. The dialogue in the trailers felt cringeworthy.

But the idea was that the final product might surprise us, and at the very least the cool spells and creative world could solve any problems. Turns out that’s not the case. Reviews are pouring in for Forspoken and they’re pretty bad. And that’s right of Square Enix is ​​trying to contain the review score damage.

As I write this, Forspoken currently has a 68 on OpenCritic and only 32% of critics recommend it. It has a 66 on Metacritic. In the context of other video game releases, these are bad scores, bad aggregates. These are numbers no studio wants to see in an industry where 90+ is a potential GOTY, 85+ is enough to land potential bonuses for your team, and 75+ is considered “pretty good”. If you end up in the 1960s with these numbers, it’s… a bad sign. Here, Forspoken’s 66 is just 5 points above the 2022 Saints Row reboot on a 61, widely regarded as one of last year’s biggest misses.

In this case, all this is even worse due to two main factors. Square Enix pulled off the old “restricted digital codes” trick and specifically avoided giving codes to many outlets. Plus, with everyone wondering if this game will be poorly optimized on PC because of the insane recommended specs Square Enix released, there are zero PC copy reviews, all this is on PS5. So it’s quite possible that these scores would have been even worse if more outlets had gotten copies and PC codes had actually gone out.

As for the big outlets, it’s pretty bleak:

I’m a little surprised that one of the more positive mainstream reviews comes from Gene Park of The Washington Post, who gave it an 8/10:

“Forspoken doesn’t do anything new for the open world genre of games, but it offers just enough to stand out, thanks mainly to Frey and her magic spells, and a story that can hold the landing. Or to translate this to Whedonspeak: “Yes, she really did!”

In general, the complaints are about the dialogue (where there’s actually a “less banter” setting in options to make it less annoying) and the dullness of the open world. Overall, the spell seems to be a highlight as I thought it might come out of the demo, but it’s not enough to make up for the other issues.

This is bad for both Square Enix and PlayStation, which touted it as one of the top console exclusives this year. And we now have to brace ourselves to find out exactly how this performs on PC with those insane recommended specs, which we apparently won’t know until the game literally goes on sale in the wild tomorrow. I would definitely wait for the Digital Foundry review before buying it there.

To update: Scores are slightly up to a 69 on Metacritic and a 70 on OpenCritic.