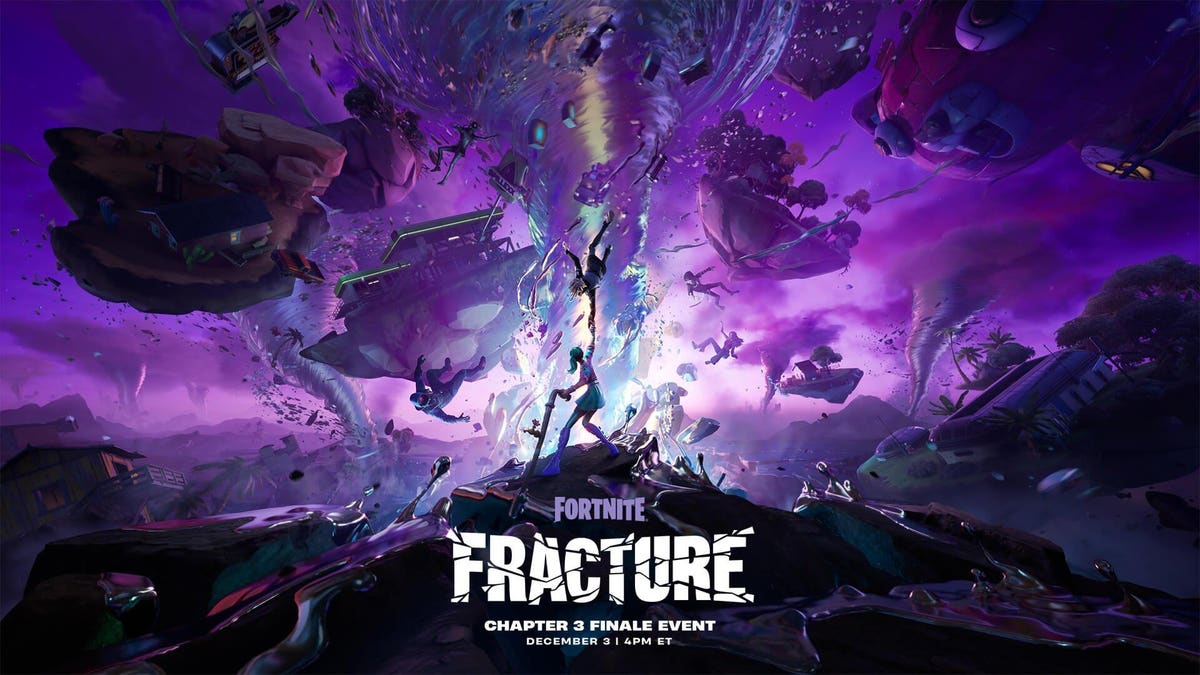 Fortnite has officially started bullying the Chapter 3 finale event, Fracture, including a preview of what’s apparently to come in new artwork, seen above.

The Fracture event, unsurprisingly, seems to destroy the map, which is how these chapter endings usually go, except for that one (last time) when the whole map was flipped upside down to reveal another one underneath. Anyway, a new map is coming, and this time a year earlier than the previous chapters.

The illustration above shows a series of chrome tornadoes tearing up the landscape, with the chrome infection as a major plot point at the end of this chapter. This all starts on the official date and time of the event, Dec. 3 at 4 p.m. ET. The assumption is that the game will go offline after that and Chapter 4 Season 1 will begin early Sunday morning, and players will be able to see the new map, additions, and battle pass when they log in. A countdown to the start of the event has now appeared in the game so you can keep track of how far along it is. Right now it’s a little over 11 days away, as it doesn’t happen over the holiday weekend, but the weekend after.

There’s also news that the event could apparently run as long as 40 minutes, which I believe would be the longest in-game event we’ve seen. This is taken from a post about the event stating that while you must log in 30 minutes early at 3:30 PM ET, you can also join ongoing events, something players have largely disallowed in the past, until 4:40 PM ET. That would imply that the in-game event is somehow 40 minutes long, when it’s usually no more than 10-15 minutes into the past. So it’s entirely possible that after a long time of relatively uneventful season endings, Epic has been saving up for a really uh, epic chapter 3 ending here.

The event will also be squad based, similar to how previous recent events have worked, with some combat encounters and a small group of allies fighting alongside you. These aren’t really “100 players staring at something big happening on the map” events like we’ve been used to. Epic has recently invested in technology to enable greater scalability for more people in event instances at the same time, but I don’t think we’re quite there yet.

So yes, block your Saturday afternoon for this in two weeks. Unlike previous things like concerts, this will be a one-off event, and if it’s really 40 minutes long, it’s going to be something you don’t want to miss, I’m guessing.