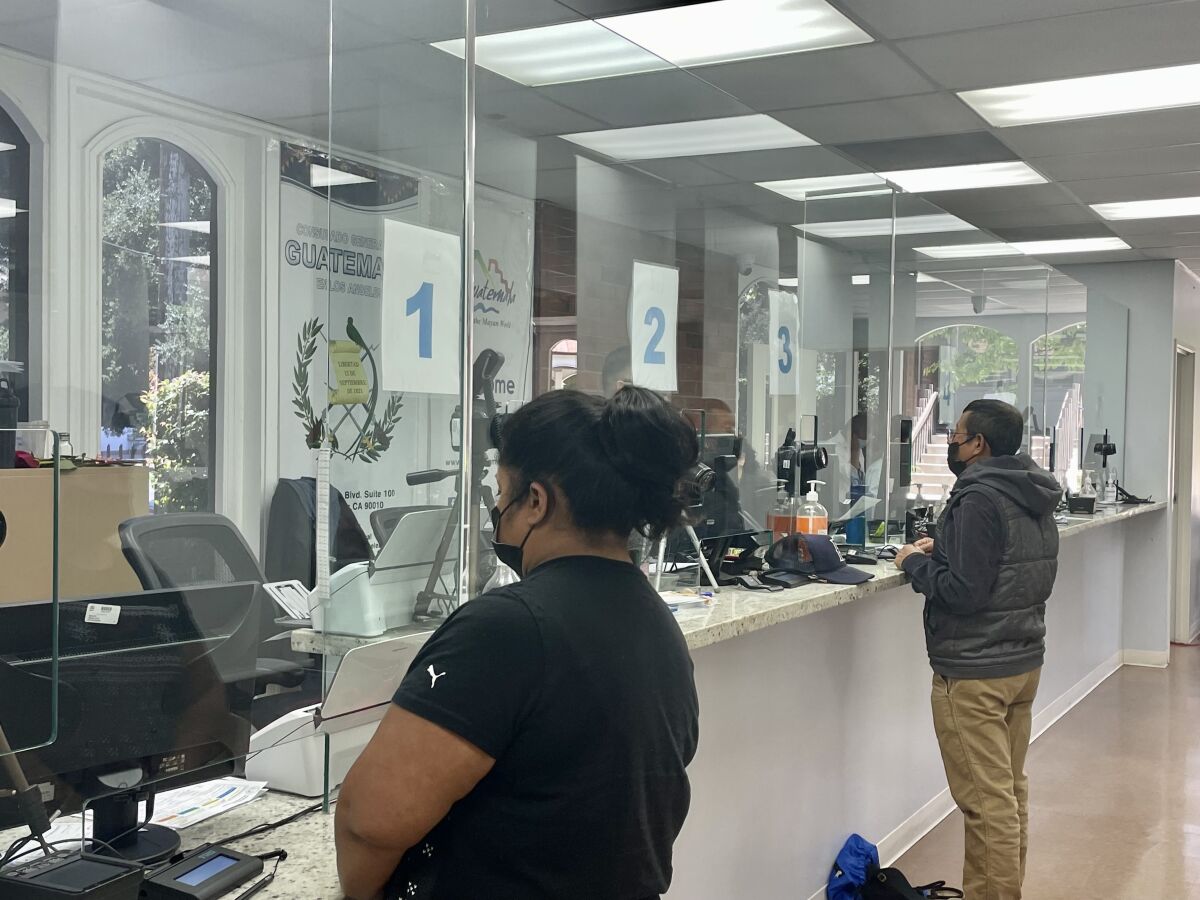 The Guatemalan Consulate in Los Angeles uses its Facebook page to promote the Central American nation and proclaim its cultural achievements. But lately, many Guatemalans living in LA have used the page to plead, vent, and despair about the lack of help they’re getting from their home countries.

“Please, I need help!” Esvin Larios recently wrote, describing how he spent two weeks trying to make an appointment to obtain a passport through the consulate’s web portal. Although he quickly filled out the necessary online application form – “Seriously, it took me less than five minutes,” he said – all the places were filled and he had to wait again.

The services of several Latin American consulates in LA were thwarted and delayed by the pandemic. But since health restrictions have been eased and the economy has bounced back, the local government outposts of Mexico, El Salvador and Honduras have largely resumed normal operations, while that of Guatemala has lagged.

The issues facing the Guatemalan consulate have snowballed since March 2020, leading to delays and other difficulties for Guatemalan citizens trying to process and obtain passports, personal identification documents, consular identification cards, and birth certificates. Now website issues are exacerbating the frustration.

“We want an appointment and we can’t visit the website,” said Moisés Arévalo, responding to a recent Facebook post from the consulate about the “Guatemalan Day” celebration on October 28.

The nomination system was implemented at Guatemalan consulates in the United States during the tenure of former president Jimmy Morales, a former actor-comedian who served from 2016 to 2020. Guatemala that gave state residents another option to schedule appointments.

The appointment portal is enabled on Fridays at 6:00 PM. In less than 10 minutes, the available places are exhausted and users have to wait a week to try again. On a normal day, the consulate grants an average of 200 appointments.

The situation is exacerbated by difficulties reaching a live consular officer.

“We have called many times and only the machine answers,” said Josefina Arévalo, who arrived at the consulate to make an appointment for her husband, who needs personal identification documents to receive medical treatment. Arévalo left indignant because a security guard only gave her a piece of paper with the information from the appointment portal, and she didn’t have time to stay for extra help.

“We need them to do something to help people who can’t get on the internet,” Arévalo said.

Since mid-August, the consulate has been issuing passports within a day, but that has not done enough to clear a backlog of previous applications, now exacerbated by the new problem of scheduling dates. At the beginning of October, the Los Angeles consulate had a printing backlog of 6,082 passports – less than the 25,131 in July, but still formidable.

“They are trying to solve some problems, but superficially it only serves to wash their faces,” said Giovanni Bautista, editor of the information portal La Voz del Inmigrante, which specializes in serving the Guatemalan community. “They seem to solve the passport problem, but they don’t pay attention to the appointments and the way they are granted.”

One October afternoon, Daniel Rivera left the consulate with a receipt in hand and the satisfaction of having processed his passport. The 22-year-old left his native Escuintla early this year. Nearly a month after settling in Long Beach, he set up an appointment at a local government office to get a passport and consular card — a step toward obtaining a California driver’s license. He started looking for a date in February and only got an appointment for October 26 on October 21.

In the midst of the pandemic, Pedro Chip entered the portal to look for an appointment. After getting one in August, the 21-year-old arrived 15 minutes early for his 8:45 am meeting.

Still, “I queued for about two hours,” said the Westlake resident and Santa Rosa county resident. “What is the appointment for then?”

At 10:30 a.m., he could finally start filling out paperwork. But since he had asked for two documents, he had to wait another three hours. By the time he left the consulate at 2 p.m., he should have called to explain why he wasn’t working.

“The consular service needs a complete turnaround, but we don’t have the competent authorities to do that,” said Úrsula Roldán, director of the Institute for Research in Socio-Humanistic Sciences at the Rafael Landívar University of Guatemala.

Roldán, an expert on international migration, said consulates should be able to provide agile, efficient and humane services to their compatriots as “a return to the sacrifice made by thousands of migrants transferring money” to to strengthen Guatemala’s economy.

ALSO READ  25 classmates were injured in a horrific crash. The recruits who keep fighting through pain

The scheduling issue is worrisome to users who have asked for modality changes and the simultaneous implementation of other alternatives, an issue that has reached that country’s Congress.

“What worries me most is the system of how appointments are managed,” said Andrea Villagrán, a Guatemalan congressman. “Minister of Foreign Affairs Búcaro has already shown that we need a much more flexible planning portal.”

Villagrán said there should be more ways for people to book appointments.

“There are different types of audience and people. Not all of them use social networks, the Internet and computers. There has to be a service that is provided on site, either in person or by phone,” she said.

A new online appointment system will be implemented in January, Rodríguez said, adding that people who are over 60 or pregnant will not need to make advance reservations. Nor do people in cases involving hospitalizations, immigration court appearances, or those involving deceased relatives.

“What we don’t want is people standing in front of the door,” Rodríguez said. “We have to teach our people that we have to move with the times.”

But Aroldo Ramírez, general manager of the community organization Misión Guatemala USA, said that local authorities have little empathy for people in their community who lack formal education and technical knowledge, and that it is not fair to implement a system that does not support these. harms users.

“They should have more human sensitivity to understand our people,” he said.