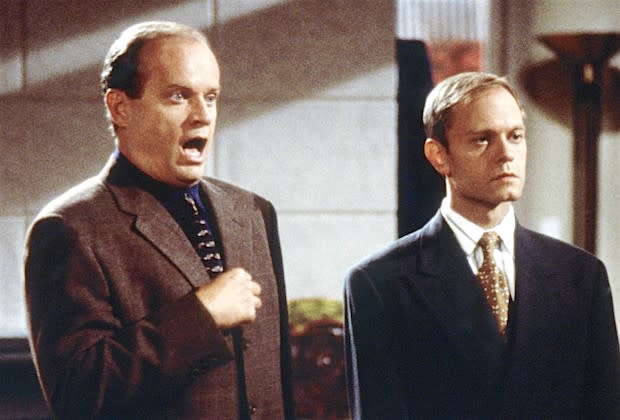 A Frasier character will look a bit different when he returns for the upcoming Paramount+ revival: Jack Cutmore-Scott (Disappointment) has been cast to play Frasier’s son Freddy, our sister site Variety reports.

Cutmore-Scott takes over from Trevor Einhorn, who played Freddy on the original Frasier, appearing in a total of eight episodes. (Frasier and Lilith’s son, Freddy was born on an episode of cheers and was played by a number of child actors on cheers and Frasier for Einhorn.)

Now grown up, Freddy — or Frederick, as Frasier used to call him — is “a nuanced combination of his father and grandfather,” according to the official description. (Frasier’s father Martin, played by the late John Mahoney, was a gruff, beer-drinking ex-cop.) “Years ago, Freddy refused to follow in his father’s footsteps — he dropped out of college to be a firefighter — and he’s never looked back until now, now that the recent troubles have left him with no one in his life. If they can overcome past differences, Freddy and Frasier may finally have a chance to heal old wounds.”

Kelsey Grammer will star in the revival, reprising his role as the cocky psychiatrist he came from cheers and then went on to its own NBC spinoff, which ran for 11 seasons and won five consecutive Emmys for Outstanding Comedy Series. The revival’s official logline states, “Frasier is headed to another city with new challenges to face, new relationships to forge, and some old dreams to finally fulfill.” Paramount+ officially serialized the revival back in October.

Cutmore-Scott starred as a crime-solving magician in the TBEN drama Disappointment, which was canceled in 2018 after one season. He also headlined the short-lived TBEN comedy Cooper Barrett’s guide to surviving life. His other TV credits include Magnum PI and Hawaii Five-0.