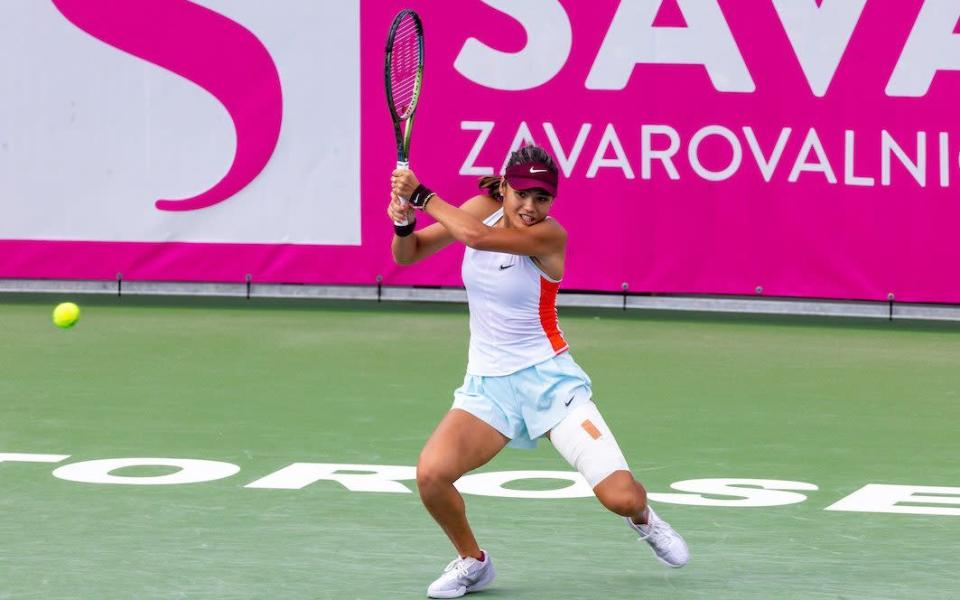 Emma Raducanu’s difficult debut year on the WTA Tour suffered a fresh setback after she was beaten by world number 213 Anna-Lena Friedsam at the Slovenia Open on Thursday.

The British No 1 arrived in the small town of Portoroz hoping to build confidence and belief following her early exit at the US Open this month.

But after coming through her first round match seemingly unscathed, Raducanu was hit by more injury woe in the defeat to Friedsam. After failing to hold serve to take the opening set at 5-4, Raducanu began to struggle with her movement and at one point bent over and held her leg in clear discomfort.

Friedsam would go on to take the first set 7-5 and during the changeover, Raducanu took a medical time out and received treatment from the tournament physio, who applied heavy strapping to her left thigh.

The break in play worked wonders for Raducanu, who swiftly won the second set 6-0 to force a deciding set as her opponent’s game bizarrely fell apart.

However, Friedsam recovered her composure and in the eighth game of the final set, she broke Raducanu’s serve for the fifth time in the match and held her own to love to seal a 7-5, 0-6, 6-3 victory.

“I played great tennis. I had to be focused on every point because like in the second set she felt more free… …and I pulled off a bit,” said Friedsam.

“It’s one of my biggest victories but I’m happy that I find my level now again after some difficult years and I hope that I will continue like that and improve. But right now I’m just happy about [winning].”

Raducanu is on the entry list to play at the Korea Open in Seoul next week but it remains to be seen whether she is fit enough. Having plummetted to 83 in the world, Raducanu has moved up to 75 in the rankings but faces an uphill battle to move back into the top 50 by the end of the year.

Raducanu loses to Friedsam, as it happened

What next for Raducanu?

As the 19-year-old departs the court, it is a disappointing loss for the top seed.

Although, she had her left thigh strapped it didn’t seem to restrict her movement too much in both the second and third set.

But full credit to Anna-Lena Friedsam, who advances to the quarter-finals. That’ll do it for our blog. Thanks for following.

Friedsam is in the complete control, as she has three match points! And there it is!

GAME SET MATCH to the German. She wins in three sets and advances to the quarter-finals!

Will Friedsam hold her nerve?

The German is just four points away from moving up 50 places if she wins this match.

Can Raducanu stop her?

On slightly dangerous times for the first seed, as she double faults giving Friedsam her first break point in this final set.

She take complete advantage of it, as the German hits a wonderful return – Raducanu had no chance.

ALSO READ  Eagles stats: DeVonta Smith did something that hadn't been done in 82 years

The 28-year-old has made the breakthrough and will serve for the match.

Yet again, a double fault from Friedsam – her eighth in this game. But she responds with a beautifully timed backhand cross-court.

Raducanu extremely brave after not the greatest volley. She put her body right in the way, as Friedsam completely over hits!

That was gutsy from the 19-year-old! Yet again, the Briton is back on terms!

We’re heading into the business end of the set…

The pressure falls back on Raducanu’s shoulders as she is serving 2-3 in this final set.

First double fault for Friedsam in this third set however, no need to panic as it was followed up by an excellent wide delivery.

The German claims her third game and leads 3-2.

Raducanu is back on terms as she wins her second game in this third set.

So who is going to blink first?

That first serve percentage is going to be crucial for Raducanu

She managed that 81 per cent of the time, in that second set – an incredible stat for the British player.

However, the 28-year-old remains strong and is 2-1 up in this final set.

Good play from the German pushing Raducanu right back behind the baseline.

If she can keep the Briton there, she has a really good chance in this final set.

Raducanu is right back into this, after a brilliant cross court backhand that Friedsam simply could not return!

The 19-year-old claims the second game in this decisive set.

She closes the game off with a delightful drop shot.

What a turnaround for Raducanu!

She was receiving treatment from the tournament physio after the first set many thought she was down and out after losing the first set 7-5.

It’s hard to explain what we have just witnessed!

And now she suddenly breaks the Friedsam serve and closed the second set off with two straight aces!

Raducanu has just wrapped up the second set, with two straight aces!

Raducanu has seriously raised her level in the set.

The crowd have gone quiet, as they can’t quite believe what they are seeing!

A stunning backhand from the 19-year-old, giving her a third straight break!

She closes the game off with a simple cross-court forehand.

She has served brilliantly in this game, forcing the German to make long returns.

What a response from the 19-year-old! At the end of the first set, her game looked to be fallen apart.

You feel Raducanu’s injury has affected Friedsam in finding her rhythm during this second set.

She simply cannot handle the wide backhand from the 19-year old.

The German served up a double fault to give Raducanu a 3-0 lead in this second set.

Is frustration getting the better of Friedsam?

The 19-year old has claimed the second game- some brilliant cross courts shots were on display from Raducanu which saw the game out.

A clear tactic from the 19-year old is to force Friedsam into the nets- then she is able to close the points out quickly to avoid long relays with the German.

A good start for Raducanu, as she claims the opening game of this second set.

She was able to adapt her game and come closer to the net and play some decisive drop shots.

The physio straps up Raducanu’s left thigh with heavy white tape. It doesn’t look good for her but she seems like she will continue to play

The tournament physio immediately comes out to see Raducanu. She is laying down on a towel and receives treatment on her left thigh.

Concern for Raducanu as she nets a backhand and hold her knee, 0-15. She then nets another backhand, 0-30.

There’s a bit of limp as she walks to her towel, 15-30. Friedsam lob and Raducanu doesn’t even move.

Raducanu flicks a forehand long and Friedsam takes the set.

Raducanu then hits her own poor drop shot into the net, 30-30. Big roar from Raducanu as Friedsam fails to return a wide first serve, set point. Wild backhand by Raducanu goes wide, deuce.

Another wide serve by Raducanu unreturned, set point No 4. Bit of luck for Friedsam as her backhand hits the net cord and drops on Raducanu’s side of the net.

Raducanu earns herself a couple of set points but is unable to capitalise. And a backhand error by Raducanu allows Friedsam to hold serve.

Can Raducanu serve it out next?

And Raducanu holds to love after a Friedsam error.

Brilliant from Raducanu as she places a lovely cross court backhand past Friedsam, three break points.

But this time Friedsam misses with a backhand and Raducanu breaks again.

Raducanu backhand into the net, 30-40. Bad miss by Raducanu on the forehand side and Friedsam breaks again.

Incredible news just reaches us that Roger Federer has announced his retirement from tennis.

He will play his last matches at the Laver Cup next week.

Three more break points for Raducanu. Friedsam saves the first two after a couple of errors from Raducanu.

Then the third when Raducanu puts a backhand long, deuce. Longest rally of the match goes the way of Friedsam, who saves another break point.

And Friedsam completes an important hold when Raducanu puts a backhand wide.

Second double fault from Raducanu gives Friedsam two more break points. But she saves both to take the game to deuce.

Another Friedsam error and Raducanu holds.

Chance for Raducanu as this time Friedsam puts a forehand well wide, 0-30. Friedsam forehand winner after a short return from Raducanu, 15-30.

Three breaks in a row to start the match.

Double fault by Raducanu gives Friedsam her first point of the match, 15-15. Good aggressive hitting from the baseline by Friedsam and Raducanu nets a backhand, 15-30.

Nice start by Raducanu as she moves to 0-30 with a cute drop shot. Friedsam then puts a backhand well long, three break points.

Raducanu forehand winner to break to love. Perfect start from the British No 1.

A place in the quarter-final awaits the two players as they walk onto court for their match. Windy conditions in Slovenia.

Friedsam won the toss and will serve first.

Hello and welcome to coverage of Emma Raducanu’s second round match at the Slovenia Open.

Raducanu made a winning start to her campaign in Portoroz when she beat Dayana Yastremska. Raducanu was leading 6-2, 5-3 when the Ukrainian retired due to a wrist injury. The 19-year-old will be aiming for another confidence-boosting victory after difficult season which has seen her win back-to-back matches on just four occasions.

“No one wants to win by retirement,” she said in her post-match interview. “Dayana’s an extremely ferocious competitor so I knew it was going to be a tough match going in. I’m really happy with the way I stayed in the point and was fighting the whole way through so I am happy to be in the next round.

“I came here early and it has been really nice here. I think it is a beautiful place to have a tournament, amazing views, great sunsets, and the food is super fresh, so I’m loving my time here.”

On another positive note for Raducanu, she will remain British No 1 even if she loses today after Harriet Dart was beaten in the first-round by Tereza Martincova. World number 85 Dart received a lucky loser entry into the tournament and dished out a bagel to her opponent in the opener before she went down 0-6, 6-4, 6-1. A strong showing from Dart at the WTA 250 event could have seen her overtake Raducanu, who has seen her ranking drop to 83 following an early exit at the US Open, but this loss means there will be no changing of the guard in the British rankings for now.

Today, Raducanu plays Germany’s Anna-Lena Friedsam, who came through qualifying and beat Elizabeth Mandlik in the opening round. Friedsam came into the tournament ranked No 213 in the world but did reach a career-high of No 45 in 2016.

The winner of this match will play Diane Parry of France in the quarter-finals on Friday.