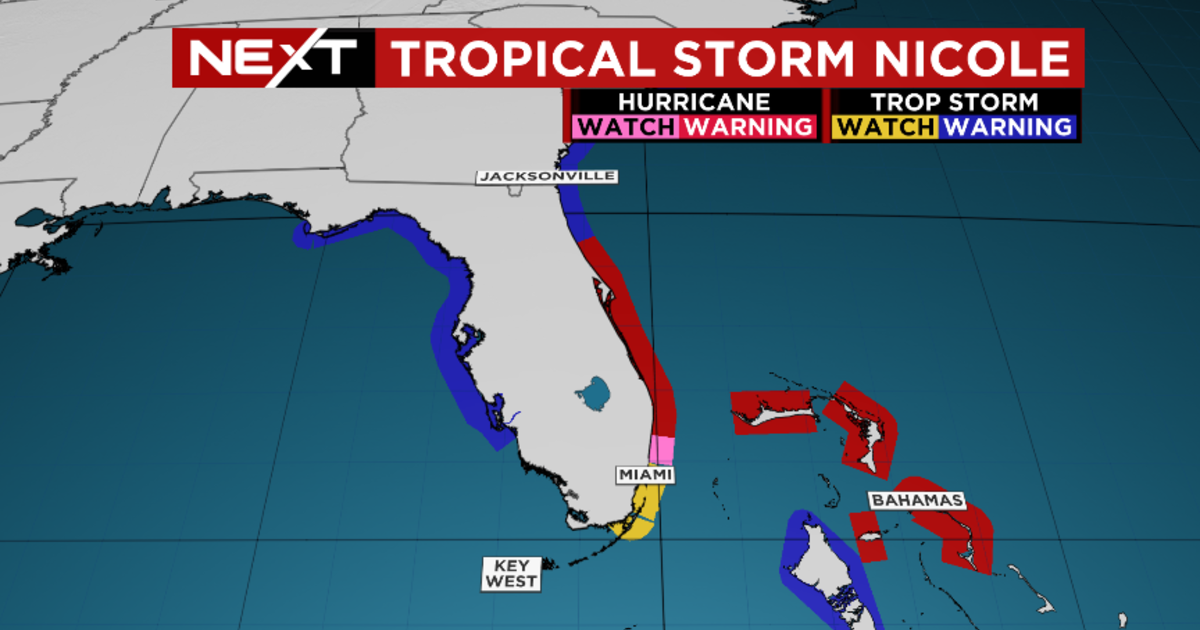 MIAMI – Tropical Storm Nicole is expected to be a Category 1 hurricane when it hits the east coast of Florida late Wednesday evening.

Forecasters say it could lead to heavy rains, damaging winds and possibly tornadoes in some places still recovering from Hurricane Ian.

Nicole is expected to be the first hurricane to make landfall in the United States in nearly 40 years in November. Nearly 4 million people along Florida’s east coast are under hurricane warnings.

Parts of the coastline have already experienced tropical storms because of how large Nicole is. Tropical storm winds, 39 to 73 mph, extended outward up to 460 miles from the center of the storm, according to the National Hurricane Center. The huge wind field, wider than stronger Ian’s on its approach into Florida, means nearly the entire state will feel winds of 39 mph or more from Nicole.

After landfall in Florida, Nicole is expected to weaken as she moves through the southeastern US on Thursday and Friday. Still, it will continue to threaten flooding and damage to Florida, which has been reeling since Ian struck down the West Coast in September and then wreaked havoc across the state, killing at least 120 people and razing communities to the ground created.

Prior to Nicole, more than a dozen school districts closed schools on Wednesday or will fire students early, with some closings through the end of the week, according to the Florida Department of Education.

In Volusia County, home to Daytona Beach, the storm poses a direct threat to life and property, county manager George Rectenwald said. Those in flood-prone areas, RV parks and other places were ordered to evacuate by 10 a.m. Wednesday.

“Our infrastructure, especially along the coastline, is extremely vulnerable due to the effects of Hurricane Ian,” Reckenwald noted in a statement on the county’s website. “We expect further erosion along the beach along with flooding in areas previously flooded by Ian. Residents should take this storm seriously.”

Some in Brevard County were also advised to evacuate from 7 a.m. The recommendation applies to barrier islands, including areas from the south beaches of Kennedy Space Center and Merritt Island, plus those in other flood-prone areas, in mobile and manufactured homes, and that rely on electricity, the county said.

“A dangerous storm surge from #Nicole is expected along much of the east coast of FL and parts of the coast of GA,” the National Hurricane Center’s Storm Surge Unit said. “The storm surge will be accompanied by large and damaging waves. Please heed the advice of local officials.”

There is a Florida hurricane warning from Boca Raton to the Flagler-Volusia County line.