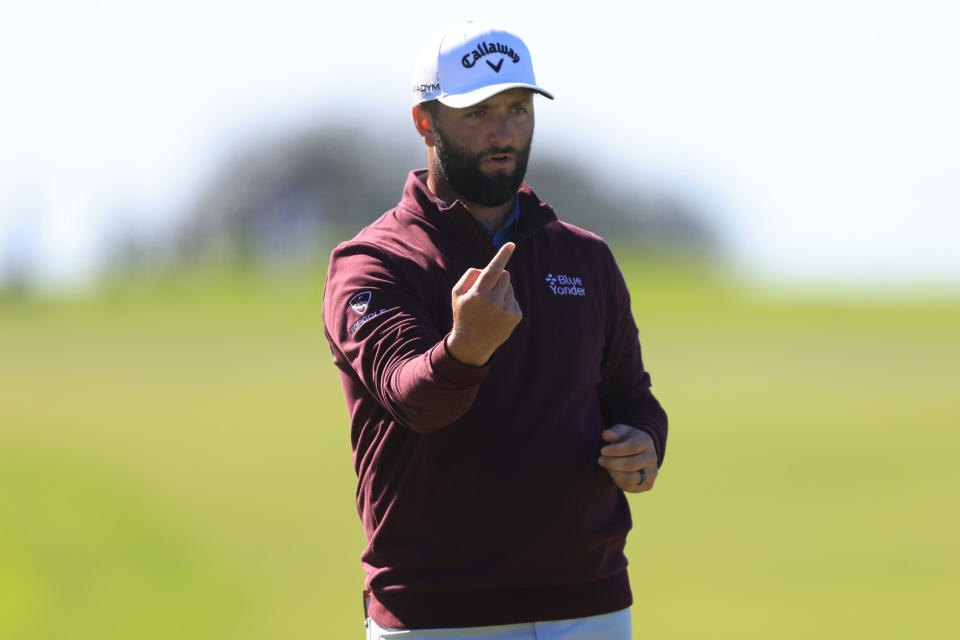 SAN DIEGO – Sam Ryder says most of his great rounds usually start with a birdie. On Wednesday, during the first round of the Farmers Insurance Open, he did one better than that.

Starting on the par-5, 10e hole on the North Course at Torrey Pines, Ryder rolled into a long eagle putt.

“Well, that’s it for me. I’m done for today,” Brendan Steele, one of his competitors in his group, told Ryder. “I was like, ‘Dude, this isn’t the best ball. You’ve got to keep playing.’ So he just decided to go crazy.

Ryder scored six birdies to team up with the eagle for a bogey-free 8-under 64 and share the lead with Aaron Rai and rookie Brent Grant. Steele tried his best to keep up with Ryder and rolled in a birdie at 10, the first of seven in the round to shoot 65.

“He was always in front of me all day,” said Steele. “His good game helped. It’s nice to see how the balls go into the hole.”

“You feed off of that,” Ryder added in a comfortable pairing that had both players dialed in. “There is certainly truth in that.”

Ryder, 33, started the tournament on a slump, having missed three straights and four of his last five, but his confidence remained intact.

“I felt like I was shaking off the holiday rust,” he explained. “I have been working hard since the start of the new year and felt good about my game. It was just, it started off the tee for me, it was driving the fairway and I felt like I could attack.

ALSO READ  Good news for golf fans: The final hour of the final round of Sentry Tournament of Champions on Golf Channel is ad-free

Ryder made it a stress-free round and it all started with the opening-hole eagle.

“There wasn’t much to the putt,” he said. “It was actually pretty straight and it was one of those when it got to the halfway mark. It looked pretty good and it just fell in perfectly.”

From DFL to the top of the leaderboard for Brent Grant

The 26-year-old rookie flew out of the American Express last week and finished last for 36 holes. His 54 score included a two-stroke penalty for coming to the first tee late on his third-round 79.

“It’s a good round of golf and I might be leading with a few other guys, but again it’s only day one,” he said. “You have to leave the past behind and it is the past, so now we move on.”

Grant birdieed four holes in a row, starting off the ninth on his way to his 64, and credited his putter for the hot start.

“I’ve probably been working harder on my putting these last four days than I ever have in my life after a pretty bad two weeks,” said Grant, who visited the nearby Scotty Cameron putting studio for a tune-up. “I am always open to changes when it comes to putting because I am as ignorant as anyone when it comes to that sort of thing. I can’t thank them enough. But again, it’s just a good start. We have to keep doing it.”

Born in England, Rai fired his own bogey-free 64 and said he felt at home on a sun-filled but cool day.

“I think the temperature and also the influence of the wind on the ball is a bit closer to that of my childhood in the UK. The ball doesn’t get that far here compared to other places in America,” said Rai.

Rookie Sam Stevens, who made back-to-back birdies at Nos. 13 and 14 on a bogey free round, and Andrew Novak, who made four birdies in a six-hole stretch at the back nine, were both good with 66 on the harder South Course.

It was a mixed bag for the top ranked players in the field. Collin Morikawa led the way with a 5-under 67 on the North Course. Will Zalatoris and Max Homa were one shot back at 68.

Reigning PGA Championship winner Justin Thomas opened with a solid 4-under 68 on the South Course.

Bidding for a win in his third consecutive start, John Rahm posted 1-over 73 on the South and will have to do his job to make the cut, let alone keep his hot streak intact. Making things even more difficult for Rahm and the field are the Santa Ana winds, which are expected to blow on Thursday.

Local product Xander Schauffele struggled to reach par 72 in the north. Tony Finau was a stroke worse at 73 in the south.

Lanto Griffin hits his first shot on the 18th hole of the North Course during the first round of the Farmers Insurance Open at Torrey Pines Golf Course on January 25, 2023 in La Jolla, California. (Photo by Orlando Ramirez/Getty Images)

Lanto Griffin wasn’t sure what to expect after a nearly seven-month absence from the PGA Tour.

Things couldn’t have gone much better than a bogey-free 5-under 67 at Torrey Pines’s North Course on Wednesday in his first round back.

Griffin, 34, underwent a microdiscectomy on July 25 to repair a ruptured intervertebral disc in his lower back (L5-S1).

Griffin said the injury had troubled him off and on for more than two years, but had become excruciating over the past three months.

“Quality of life was impossible,” said Griffin, who had last played at the John Deere Classic on July 1.

Prior to surgery, Griffin attempted an epidural, but the injection only made the injury worse.

Griffin said he has been strengthening his back through physical therapy and walking his dog four times a day. He began rehabilitation last week on the Korn Ferry Tour, marking his first time playing and walking for six straight days. He put in 100 percent.

“Very close,” he said. “Knock on wood, it’s been good for the past three months.”

Chances after the first round