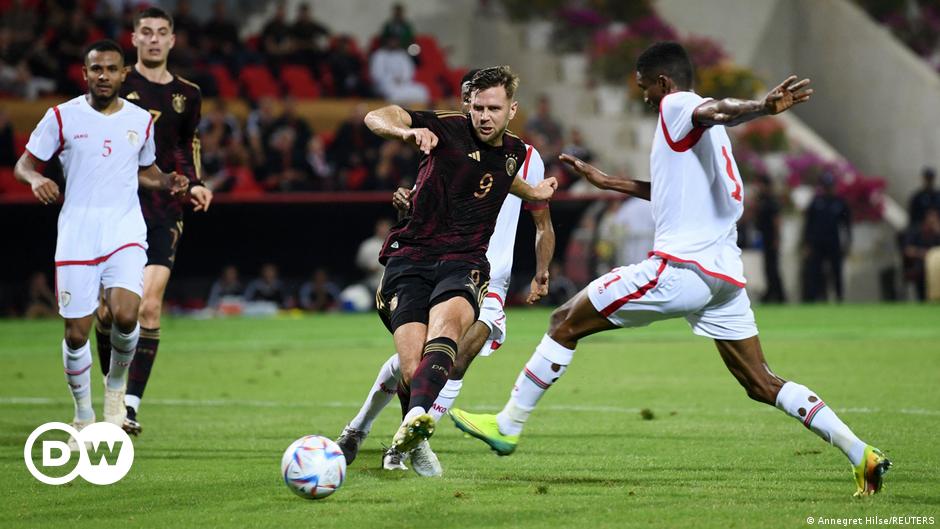 With a week to go until their World Cup opener against Japan in Qatar, Germany scraped past Oman thanks to a late goal from Niclas Füllkrug.

The Werder Bremen striker made his international debut as a half-time substitute and fired home ten minutes from time after Kai Havertz drove into the penalty area to set him up.

The 29-year-old Füllkrug, so far the highest scoring German in the Bundesliga with ten goals, thought he would get a second chance moments later, but he was rightly flagged for offside.

The 1-0 win over the Persian Gulf means that Germany will enter the World Cup with a victory, just like in 2018. But, as in 2018, that doesn’t tell the whole story, even though head coach Hansi Flick was a calm figure at full-time.

“This game has definitely served its purpose,” he told the broadcaster RTL. “We specifically chose to come to Oman to get used to the temperature and the conditions, and everything went according to plan, including the changes we made.”

Privately, however, Flick will have noticed several areas for improvement before his team faces Japan next Wednesday at Khalifa International Stadium in Al-Rayyan.

Because in the 80 minutes leading up to Füllkrug’s clinical finish, Germany were sloppy in midfield and toothless in attack, with fellow debutant Youssoufa Moukoko making a particularly nervous figure in the first half.

The Borussia Dortmund striker, aged just 17 years and 361 days, made history as the youngest ever player to play for Germany, overtaking the legendary Uwe Seeler, who was 17 years and 345 days old when he made his debut in 1954 .

Moukoko did see an attempt slip off the post just before half-time, but he was also notable for his poor control in and around the box, with Germany having no outlet. That changed with the introduction of Füllkrug.

“Our balls in the penalty area were much better in the second half and we could feel there was presence up front,” said Flick, while former Germany international Lothar Matthäus in his role as RTL expert: “Füllkrug is a bit of the street football player we’ve been missing. He’s there when we need him.”

Before then, Germany’s only real attacking moment had come when Havertz’s effort was well saved by the impressive Ibrahim Saleh Al-Mukhaini after a fine one-two with Leon Goretzka – one of a string of saves from the Oman goalkeeper in a man-of-the-match performance.

Otherwise, it was the hosts, ranked 75th in the world, who seemed more likely to open the scoring, with several dangerous counter-attacks.

Their best chance came after the break when Zahir Al-Aghbari played in on the right Jameel Al-Yahmadi, whose cross Muhsen Al-Ghassani somehow failed to convert for an open goal.

After losing 2-0 to Germany in the only previous meeting between the two nations in February 1998, it would have been a historic goal for Oman. But Füllkrug made them regret their miss just eight minutes later, much to Flick’s relief.

Flick: “Everything is okay”

“Of course we weren’t at the level we want to be at the World Cup, and you could see the players were careful not to get injured, but everything is fine and nothing has really changed,” Flick stressed. .

“We are looking forward to going to Qatar, to the World Cup, and we think the players will feel comfortable in the camp, where they can relax and prepare mentally.”

But he will know that there is work to be done and very little time to do it.