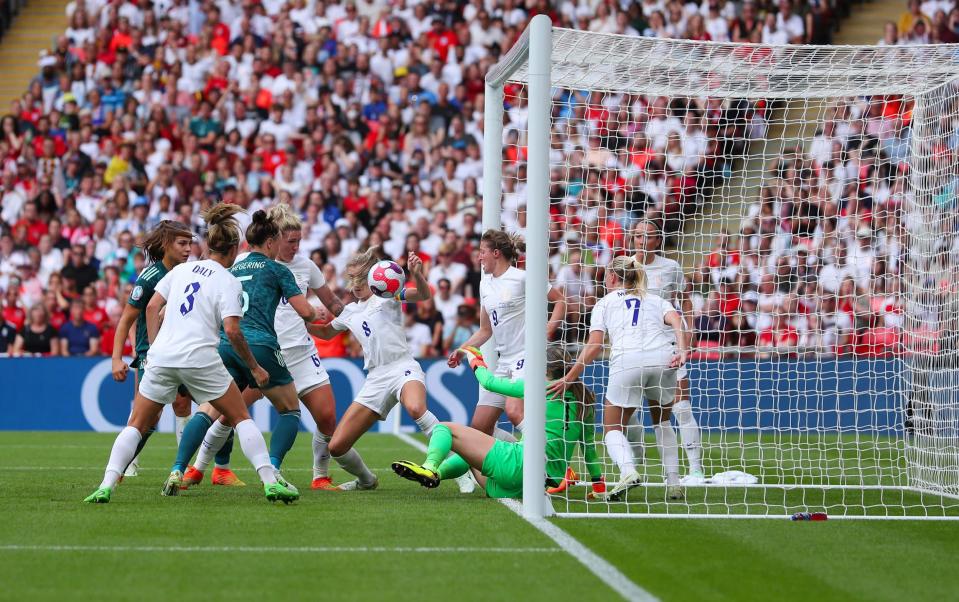 Germany was left furious by a “clear handball” on the goal line by England captain Leah Williamson after the defeat of the Women’s European Championship final.

Manager Martina Voss-Tecklenburg criticized referee Kateryna Monzul for not rechecking the incident herself in the first half after the video assistant referee ruled her decision not to award a penalty was not a clear and obvious mistake.

The match was goalless at the time and England would take the lead in the second half.

Voss-Tecklenburg said: “Let’s make a distinction between football and feelings and let’s start with the football business. In the first half, possession was a bit more for the English side.

“We’ve had some attacks, but what I’m thinking about now is that at 0-0 there was a situation where there was a clear handball in the penalty area and Var looked at it and didn’t award the penalty.

“In such a big game it’s difficult to deal with that. I ask, why didn’t the referee look at it? That would have given us more safety if we had scored.”

She added about the officials’ refusal to recheck: “At this level and in the final of a European Championship, this has not happened. Why didn’t they look at it? Sometimes it happens to others, it happened to us today, and if it had happened to England I wouldn’t be happy either, it bothers me.”

Voss-Tecklenburg also stated that her match was “unfortunate” to lose, but congratulated England and said they were “deserved champions”, and applauded them for winning the nation’s “hearts”.

Germany had won all eight of their previous Euro finals and Voss-Tecklenburg said: “For us it was a bit ambivalent, a lot of pride, and it was incredibly loud, difficult to communicate, but this will help us a lot for the future.

“On the one hand I’m super proud because we gave everything on the pitch, the sweat, the struggle, the energy, everything we gave on the pitch, so that’s very sad, you can’t really find the right words to say say to the team.

ALSO READ  Have the Celtics lost interest in Kevin Durant?

“We came here to win the game, we didn’t succeed, but it was a match of the same level and I think tomorrow or the day after tomorrow I will have a different feeling about it.”

Germany’s heartbreaking defeat was spread in the major German newspapers, which described the loss as painful and full of drama.

Der Tagesspiegel, a daily newspaper, said in a headline: “The drama of Wembley”, while the Frankfurter Allgemeine front page said: “Lost, but much gained”.

A front-page headline of the daily Süddeutsche Zeitung said “Mourning at Wembley” in stark agreement with the victory images and headlines splashing through English newspapers.