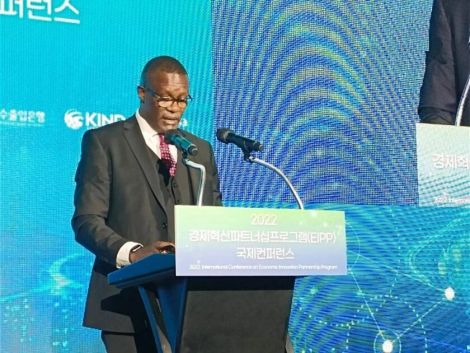 “I met Owalo way back in 1992 when he wanted to meet then President Daniel Arap Moi and ever since then I have closely followed his journey and path to leadership,” noted DP Gachagua.

According to Gachagua, young Owalo showed an early interest in joining politics and taking part in important policy issues that would shape the country.

“Owalo approached me and asked if he could meet with Mzee Moi to share with him some political strategies on how to win votes in this difficult region (then) as it is (now),” added Gachagua.

The vice president told those gathered to celebrate Owalo’s appointment to the cabinet that his friendship with the ICT CS spanned more than three decades.

“He was a university student at the time and he worked at Harambee House as one of the people who assisted President Daniel arap Moi in managing public policy and political organization in the country,” Gachagua said.

Gachagua recalled Owalo’s exemplary performance while serving in the Office of President in the early 1990s.

“I organized a meeting for Eliud Owalo in 1992 with President Moi at the Kisumu State Lodge,” recalls Gachagua.

“President Daniel Arap Moi listened to Owalo and said, ‘Young man, you have a great future in leadership,’ Gachagua continued.

Gachagua asked Owalo to remain steadfast in his faith and focus on uniting TBEN of all walks of life, not just the people of the former Nyanza province.

“I am so happy today that President Moi’s words have come true and that he is now cabinet secretary,” Gachagua affirmed.

For his part, President William Ruto praised the cabinet secretary for his willingness to bring about change in the country.

Ruto, who graced the homecoming and thanksgiving ceremony for Eliud Owalo, secretary of the ICT and Creative Economy Cabinet, in his village in Gangu, Siaya County, also told the gathering that the people of Nyanza are dear to him.

Before attending the Owalo ceremony, the head of state opened a research center at Jaramogi Oginga Odinga University of Science and Technology in Bondo constituency.

During his three-day tour of the region, President William Ruto was warmly received in Kisumu and Homa Bay, where he was presented with a 20 kilogram fish. 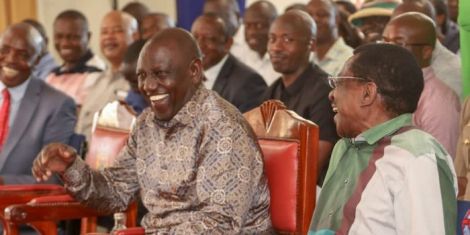 President William Ruto along with Siaya Governor James Orengo at an event in Siaya County on January 14, 2023.