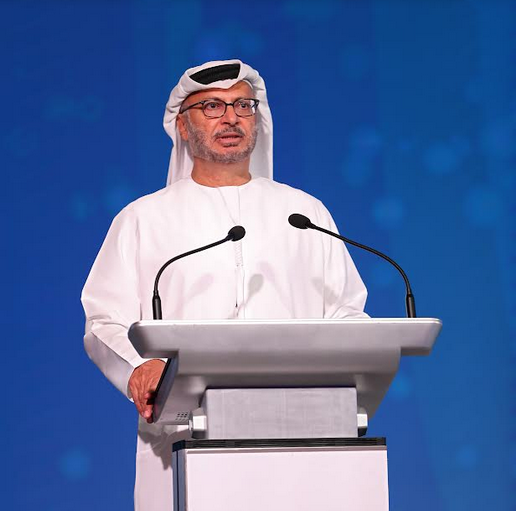 The UAE President’s diplomatic advisor, Dr. Gargash, affirmed that the UAE is committed to basic principles in its foreign policy and that it has no interest in “choosing a side” among the great powers.

In his opening speech to the Ninth Abu Dhabi Strategic Forum, organized by the Emirates Policy Center, under the title: Global Order: Shaping the New Great Game, Gargash said: “One of the basic principles of His Highness Sheikh Mohamed bin Zayed Al Nahyan, President of the State, may God protect him, is not to prejudice Any circumstance is under the sovereignty of the Emirates, and the interests of the UAE shall be prioritized.

Gargash congratulated Dr. Ibtisam Al Ketbi and the Emirates Policy Center for the continued success of the Abu Dhabi Strategic Forum, describing it as a pioneering event.

While the President of the Emirates Policy Center, Dr. Ibtisam Al Ketbi: “The Abu Dhabi Strategic Forum has become an annual platform in which the Emirates Policy Center brings together elites, politicians and experts to discuss issues and transformations of the international and regional systems, and aims to provide a qualitative addition in analysis and foresight, and thus enhance the capital’s contribution to Abu Dhabi in strategic dialogues related to regional and international policies.” .

Al Ketbi added, “What distinguishes this year’s Abu Dhabi Strategic Forum is that it is being held under a new president of the UAE, and this development will be present in the first session of the forum this year.”

She explained that the forum will discuss in its sessions the developments of the post-war world in Ukraine, and the formations of the global order; The competition of major powers, and its effects on regional systems.

ALSO READ  Abdullah bin Zayed: Our goal at the current stage is to develop the education system with an approach that keeps pace with our national aspirations

The forum will be held over two days, and the first day includes eight sessions in which it discusses the rise of the United Arab Emirates towards the future under the leadership of His Highness Sheikh Mohammed bin Zayed, the Russian war in Ukraine, the American foreign policy agenda, and the alignment and realignment in the international system in terms of Europe’s attempt to get out of its crises China’s endeavor to strengthen its alliances, the geo-economics of international strategic competition for food, climate change policies, the prospects for conflicts that may arise due to geo-strategic competition for energy, and the race for dominance in the digital field.

On the second day, the forum will also discuss the future of the Middle East in terms of security arrangements, regional alliances being formed, the course of regional and international competition in the Gulf region, the repercussions of Iranian policies on regional stability, the map of options and scenarios in the course of the Palestinian cause, and other issues of interest to the Middle East region, such as the protection of nature and climate. and cyber security.

The Bharat Express News - December 5, 2022 0
Trump's failure to distance himself from anti-Semitism — and those men — is "not just unacceptable, it's just wrong, and I hope he finds...