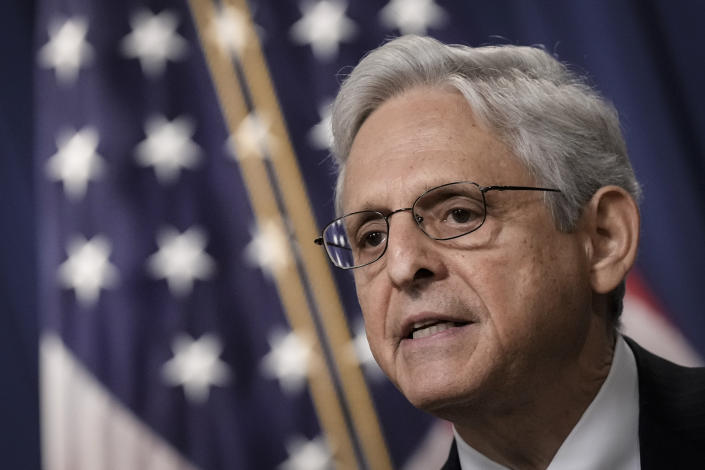 NEW YORK — Attorney General Merrick Garland spoke to the “urgent” need to overcome the “intense polarization in America” ​​in a passionate and sometimes emotional speech on Saturday.

Garland made his comments after taking the oath of allegiance to 200 new U.S. citizens at a naturalization ceremony on New York’s Ellis Island.

“We must not allow the rifts between us to break our democracy,” Garland said. “We’re all in this together. We’re all Americans.”

In the shadow of the Statue of Liberty, Garland swallowed his tears as he pondered his own family’s immigration story and the religious persecution that led some of his relatives to seek refuge on Ellis Island in the early 20th century.

He shared the story of his grandmother, one of five children of a Jewish family in what is now Belarus, who had fled religious persecution during World War II. However, only three of them made it to the United States, including his grandmother. The other two, he said, “perished during the Holocaust.”

“Had it not been for America, there’s no doubt the same would have happened to my grandmother,” Garland said, his voice trembling. “But this country took her in. And under the protection of our laws, she could live without fear of persecution.

“That protection,” he continued, “is what sets America apart from so many other countries.”

This message, and the welcome scene on Ellis Island, contrasted sharply with those this week on Martha’s Vineyard and outside the residence of Vice President Kamala Harris in Washington, DC, where migrants (many of them Venezuelan asylum seekers) found themselves in the midst of a bitter political battle between the Biden administration and Republican governors of southern border states, who blame what they see as lax immigration policies for the record number of migrants detained along the Mexican border this year.

The Biden administration also faced criticism this week from immigration attorneys after reports that it wants to expand its use of Title 42, a Trump-era policy that uses the pandemic as a justification for immediately expelling migrants detained at the border. even if they can have legitimate asylum applications.

Many experts have cited the policy, which the Biden administration has tried to publicly revoke, as a major contributor to the record number of detentions at the border, including many repeated crossings.

Garland’s comments also come amid an ongoing lawsuit between the Justice Department and former President Donald Trump over classified documents FBI agents seized from Trump’s Florida estate last month. The Justice Department, and Garland himself, have been accused by the former president and his allies of playing politics in the ongoing criminal investigation into the possible mishandling of sensitive government documents removed from the White House after Trump left office last year.

In recent rulings granting Trump’s request to appoint a special captain, the federal judge overseeing the case has suggested it requires different treatment because it involves a former president.

“As a function of Plaintiff’s former position as President of the United States, the stigma associated with the seizure of the subject is in a league of its own,” said a Sept. 5 ruling from U.S. District Judge Aileen Cannon, a Trump appointee. . “A future charge, to any extent based on property that would have to be returned, would result in reputational damage of a distinctly different magnitude.”

Cannon also noted in a Sept. 15 ruling that “the principles of equity require the court to consider the particular context in question, and that consideration is inherently affected by the position previously held by Plaintiff.”

Garland, who does not usually engage in politics, did not address either debate, but instead spoke about the importance of the rule of law in upholding democracy.

Saturday marked the 235th anniversary of the signing of the U.S. Constitution on September 17, 1787, and the Ellis Island event kicked off a week of special naturalization ceremonies across the country, hosted by the U.S. Citizenship and Immigration Services to “close the connection between the Constitution and citizenship.”

Prior to the ceremony, “America the Beautiful” played through speakers as citizenship candidates and their loved ones poured into the Great Hall, where 12 million immigrants were once processed for them upon arrival in the United States. The 200 new citizens sworn in on Saturday came from 57 different countries, including Albania, China, Dominican Republic, Ghana, Japan, Lebanon, Moldova, Nepal, Pakistan and Venezuela.

Among them was Joyce Ramdan, who moved to the US from Guyana in 1996. She said she finally decided to become a citizen with her children and grandchildren earlier this year so that she would have more security and freedom to travel. Ramdan told Yahoo News she was “excited” and “glad to be a citizen so I can vote.”

Voting was also why Nick Parker, a resident of the United Kingdom, decided to become a citizen of the United States after 13 years in the United States. Parker told Yahoo News that he had driven into town from Westchester, NY, with his wife and two daughters for the ceremony, and by the time they got to Ellis Island, it had already been a long morning with a lot of time spent waiting. in a line.

When asked if he was excited to hear the Attorney General speak, Parker’s face lit up in surprise.

“That’s why there are so many people,” he said, taking in the long lines of people around him with a new appreciation. “Well, that’s super cool.”