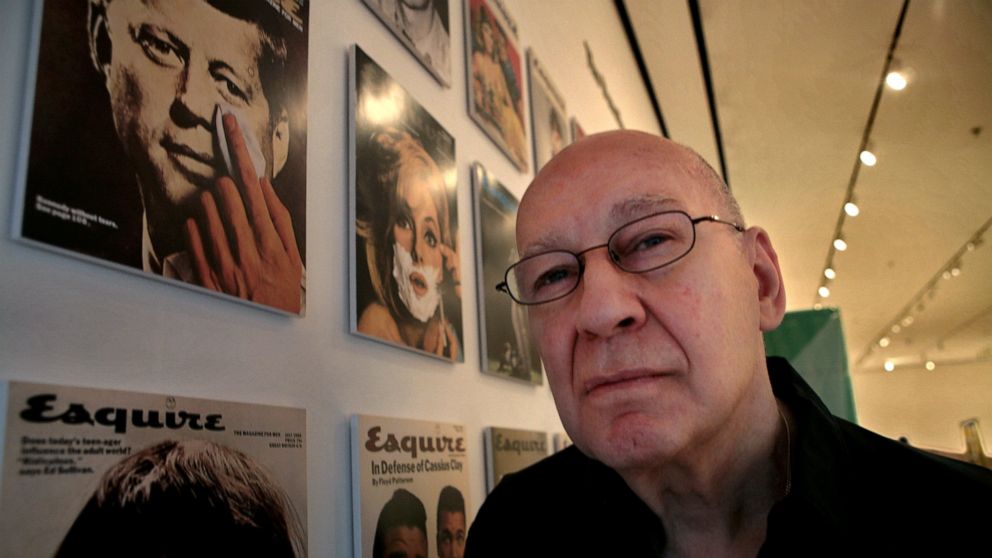 NEW YORK — George Lois, the hard-selling, charismatic advertising executive and designer who created some of the most daring magazine graphics of the 1960s and popularized slogans and brand names like “I Want My MTV” and “Lean Cuisine,” has passed away. He turned 91.

Lois’ son, the photographer Luke Lois, said he died “peacefully” Friday at his home in Manhattan.

Nicknamed the “Golden Greek” and later (much to his dismay) an “Original Mad Man,” George Lois was among a wave of advertisers who launched the “Creative Revolution” that swept Madison Avenue and the world beyond in the late 1950s and ’60s. shocked. . Boastful and provocative, willing and able to offend, he was a master at finding just the right image or words to capture a moment or create a demand.

His covers of Esquire magazine, from Muhammad Ali posing as the martyr Saint Sebastian to Andy Warhol sinking into a sea of ​​Campbell’s tomato soup, defined the hyper-spirit of the 1960s as much as Norman Rockwell’s idealized drawings for the Saturday Evening Post evoking an earlier era. . As an advertising executive, he pioneered strategies for Xerox and Stouffer’s and helped an emerging music video channel in the 1980s by running ads featuring Mick Jagger and other rock stars shouting, with fake petulance, “I Want My MTV!”

Lois condensed it into what he called the “big idea,” where he “crystallized the unique virtues of a product and seared it into people’s minds.” He was inducted into numerous advertising and fine art halls, and in 2008 his Esquire work was added to the Museum of Modern Art’s permanent collection. Martin Scorsese, Tina Brown and Graydon Carter were among his admirers.

His legacy was enormous, although its actual dimensions are disputed. His claims of developing the “I Want My Maypo” breakfast ads of the 1960s and inspiring the creation of New York magazine have been widely contradicted. Some former Esquire colleagues would argue that he exaggerated his role to the detriment of other contributors, such as Carl Fischer, who shot many of the magazine’s famous covers. But his overwhelming energy and confidence were well captured.

In her memoir “Basic Black,” former USA Today publisher Cathie Black recalled enlisting Lois in the early 1980s to suggest a new advertising approach for a publication that was initially struggling with how to identify itself. Lois’s idea was to defend USA Today’s dual appeal as a newspaper and magazine, proposing the slogan: “Many people say that USA Today is neither fish nor fowl. They are right!” For a gathering of the publication, which included founder Al Neuharth, Lois gave an Oscar-worthy performance, Black wrote, “bursting in like a six-foot teen jumping on Red Bull.”

“He flung his jacket on the floor, tore off his tie, then flashed one prototype ad after another, hopping around the room and delivering a running monologue of jokes and profanity. It was epic, almost scary. I was excited. When he was done, the room was completely silent.” All eyes were on Neuharth, who “sat absolutely still, his expression hidden behind his dark aviator glasses”. Neuharth paused, took off his glasses and smiled. “We got it,” he said.

The son of Greek immigrants, Lois was born in New York City in 1931 and is said to credit his Irish neighborhood’s racism for his drive “to awaken, to disturb, to protest”. He liked to say that a successful advertiser absorbed as many influences as possible, and he prided himself on his knowledge of everything from sports to ballet. He was a compulsive draftsman and spent much of his life making weekly visits to the Metropolitan Museum of Art.

He enrolled at the Pratt Institute, soon met his future wife, and eloped with her before either of them graduated. After serving in the military during the Korean War, he joined the advertising and promotions division of TBEN and helped found the Papert Koenig Lois advertising agency in 1960. Two years later, he was recruited by Esquire editor Harold Hayes and stayed until 1972, the same year Hayes left.

Esquire was an excellent venue for the so-called New Journalism of the 1960s, non-fiction stories with a literary approach, and the magazine would publish such famous pieces as Gay Talese’s portrayal of Frank Sinatra and Tom Wolfe’s “The Last American Hero Is Junior Johnson.” Yes!” But to read the words you had to buy the magazine, and Lois’s covers sparked countless conversations.

ALSO READ  Starbucks union to strike at more than 100 locations on Red Cup Day, one of the chain's busiest days of the year

For a cover story on “The New American Woman,” he featured a nude model folded into a garbage can. An infamous 1970 cover featured a grinning Lieutenant William Calley, the military man later found guilty of murdering unarmed civilians in the My Lai massacre, with his arms around some Vietnamese children, two other children behind him .

In the mid-1970s, Lois was one of several public figures who spearheaded efforts to break boxer Rubin “Hurricane” Carter out of prison. Carter’s murder conviction was later overturned and he was released in 1985. Lois also wrote several books and was featured in the 2014 Esquire documentary, “Smiling Through the Apocalypse.”

Interest in Lois was renewed by the popularity of the AMC series “Mad Men”, but he was not flattered, writing in his book “Damn Good Advice” that the show was “nothing more than a soap opera set in a glamorous office where stylish fools pounce on their appreciative, coiffed secretaries, suck martinis and smoke themselves to death while producing stupid, lifeless commercials.

“Besides,” he added, “I looked better than Don Draper in my thirties.”