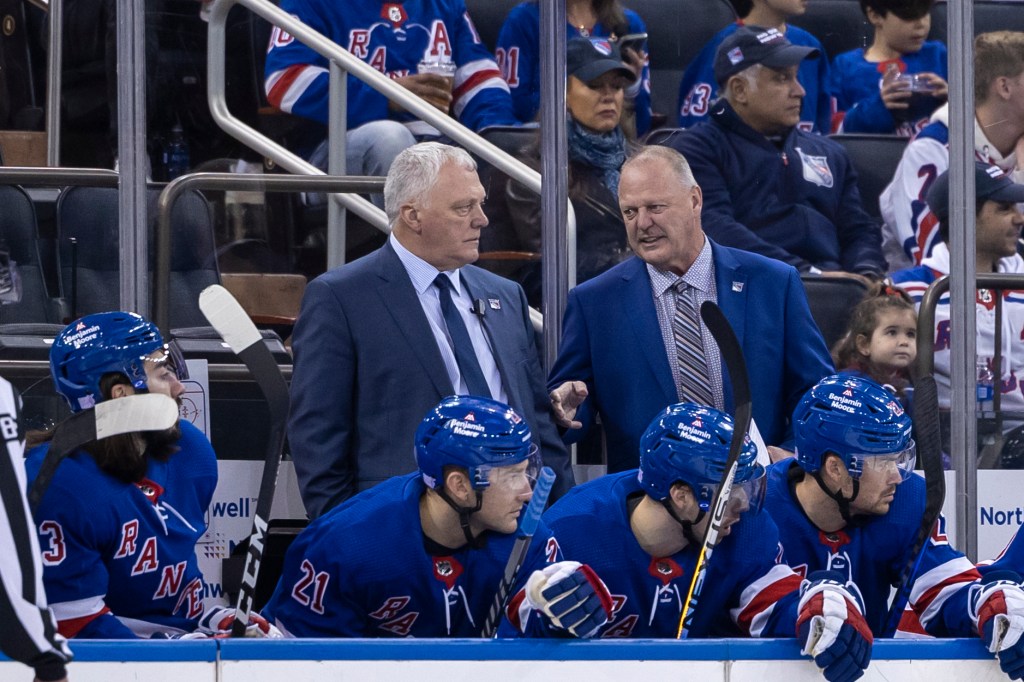 On the day it got an hour earlier for the New Yorkers, it started getting a little late for the Rangers.

Since only about a third in 2022-23, the Blue Shirts have won less than half of their games, the record slumped to 6-4-3 after Sunday’s 3-2 defeat at the Garden to the Red Wings after a 2- 0 lead to the second period.

But let me tell you, it certainly wasn’t too early for head coach Gerard Gallant to drop an unremarkable Chris Kreider to the fourth line with Ryan Carpenter and Julien Gauthier in a series of line changes in the third period. Kreider’s feet just don’t move. This was as dramatic a move as Gallant made in his regular-season 95-game tenure behind the New York bench. It probably took a long time.

“He deserved to be where he was,” said the coach. “He wasn’t alone.”

The Rangers are in the middle of the pack of those clubs that are currently outside the playoff cutline, and what’s more or less is that this team hasn’t established any identities yet. Mika Zibanejad and Jacob Trouba – two of the four players who deigned to be available to the media – talked about how the team knows what the game is and needs to get back to it, but that seems like a leap of faith at the moment .

This is not the team from last year. Jaro Halak may have put in the best netminding performance of the year in this effort of 33 saves that have kept at least a point, but the Blueshirts haven’t been able to lean on their goaltending like they did through Igor Shesterkin’s Vezina winning 2021-22 campaign. Indeed, the team is in 25th place with a five-to-five save percentage of .906. That was a bit of Arizona territory last season.

Thirteen matches in and it’s quite a challenge to identify what this group is doing remarkably well. To suggest that the Rangers are not a particularly physical group would be in the running for an understatement of the season. They predict in spurts. There is too much risk to their puck management game. They don’t defend the fold very well.

And for a club with just as many skilled squad players, the Rangers are impotent at five-on-five. They left the ice on Sunday the 25th in the NHL with 2.1 goals per 60:00 and are also 25th in the five-on-five goal difference percentage of 44.90, having scored 22 and allowed 27 . 15th after Sunday’s 1-for-2.

These are not numbers befitting a Stanley Cup contender. These are numbers that might not fit a playoff team.

The first period represented one of the club’s best of the season, with the Blueshirts leading with two goals after 20 minutes for the first time since the second game of the year in Dallas. But their energy quickly disappeared. Their attack went smoothly. The Red Wings, 7-3-2 and a legitimate threat to end their six-year post-season drought, took control.

Perhaps it is more correct to suggest that the Rangers handed it over, as they have so often done with the puck. There was also a blatant line change by the Zibanejad-Kreider-Kaapo Kakko unit that led directly to the Wings 2-2 equalizing goal on a second rebound at 8:37 of the second period that was scored without a Blueshirt attacker in view. . There appeared to be some ignorance in the coverage of Detroit’s first goal scored on a forward deflection.

Understand this: The Rangers have not held the lead in the third period since game four of the season, October 17 against Anaheim.

The pace at times, or at least when the Rangers were trying to weave through the neutral zone, seemed like September. Kreider, who got a season coat of 15:03 ice but did get the first overtime, was fingered more than any other attacker by Gallant, who mixed up all his lines. Assistant coach Gord Murphy, who leads the defense, seemed to give Zac Jones, No. 6, just one shift in the third period, the one in the second minute.

The line combinations that were essentially static do not produce. Gallant pushed Alexis Lafreniere to Filip Chytil’s wing in the third as he brought Sammy Blais to Vincent Trocheck’s wing. Artemi Panarin, who can’t seem to get his steps through, skated to the left of Zibanejad. The third period was better than the second, but it wasn’t enough.

Neither Zibanejad nor Trouba took this lightly, the captain acknowledging that 60 minutes of play has been a challenge for this group all season long. The Rangers can’t be happy with their state. They will have a long battle if things don’t go fast.

Thirteen games into the season, it’s getting late quite early.