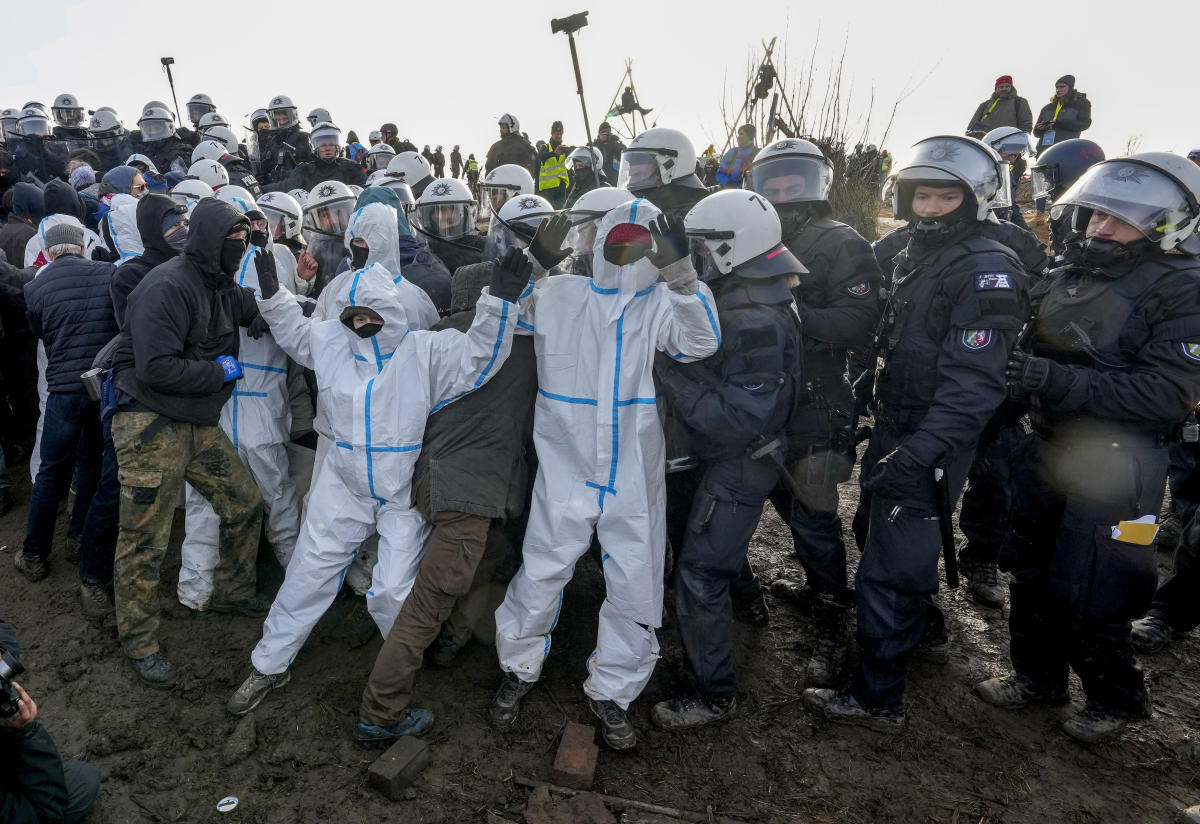 ERKELENZ, Germany (TBEN) — The fate of a small village has sparked heated debate in Germany about the country’s continued use of coal and whether tackling climate change justifies breaking the law.

Environmentalists this week became embroiled in a standoff with police around the hamlet of Luetzerath, west of Cologne, which is due to be bulldozed for the expansion of a nearby lignite mine.

Protesters refused to comply with a court ruling on Tuesday that effectively banned them from the area. Some dug trenches, built barricades and sat on giant tripods to prevent heavy machinery from reaching the village before the police forcefully pushed them back.

“People are putting their whole lives into this fight to keep the coal in the ground,” said Dina Hamid, a spokesperson for the activist group Luetzerath Lives.

“If this coal gets burned, we’re going to cut down on our climate goals,” she said. “So we’re trying to protect the climate targets with our bodies.”

The debate flared hours later at a town hall meeting in nearby Erkelenz, when a regional official accused activists of being willing to “shed human blood” to defend the now-abandoned village.

Stephan Pusch, head of the district administration, said that while he sympathized with the protesters’ aims, it was time to give up on Luetzerath. The last resident of the village left in 2022 after a forced sale to utility company RWE.

ALSO READ  Joe Concha on the Biden documents scandal: 'No way' that Trump can be indicted unless Biden is too

“You have achieved your goal. Clear the field now,” he said to jeers from the room.

Many disagreed, arguing that the village is more than just a powerful symbol of the need to stop global warming.

Studies show that about 110 million tons of coal could be mined under Luetzerath. The government and RWE say this coal is needed to ensure Germany’s energy security – strained by the reduced supply of Russian gas due to the war in Ukraine.

Critics counter that burning so much coal would make it much more difficult for Germany and the world to limit global warming to 1.5 degrees Celsius (2.7 Fahrenheit), as agreed in the 2015 Paris climate agreement.

“Nobody wants to be out in the cold defending a forest or a village now,” said Maya Rollberg, a 26-year-old student who had come from southern Germany. “But I think people have recognized that they have to do that to[protect]future generations.”

Dietmar Jung, a retired priest who attended the meeting, said he was tired of hearing officials say the law was on RWE’s side.

“They keep falling back into the legal situation,” he said. “But the right to life plays no role here (for them).”

Pusch, the head of the regional administration, warned protesters that deliberately breaking the law would not benefit their cause in a country where the violent takeover and horrors of dictatorship are still vivid in memory.

“I’ll be honest with you that I’m afraid my kids will grow up in a world that isn’t worth living in anymore,” he said. “But I am just as afraid for my children who grow up in a country where everyone takes the law into their own hands.”

“You’re not going to save the world’s climate on your own,” said Pusch. “(We will) only do this if we manage to bring the majority of the population with us.”

Similar debates about how far civil disobedience can go have taken place in Germany and elsewhere in recent months amid a spate of roadblocks and other dramatic actions by protesters demanding tougher measures to combat climate change.

Some climate activists say the law is ultimately on their side, citing a 2021 ruling by the country’s highest court that forced the government to ramp up its efforts to reduce emissions. They also point to the legally binding nature of Germany’s commitments under the Paris Agreement.

Speaking after the town hall meeting, student Jannis Niethammer acknowledged that the Luetzerath dispute touches on fundamental issues. “It’s a question of democracy and how do we actually get a democracy moving towards climate protection, towards climate justice,” he said.

Janine Wissler, a federal legislator and co-leader of the Left Opposition Party, suggested that the government reverse its decision to raz the village to the ground.

“If we want to meet our climate goals and take the Paris climate agreement seriously, the coal under Luetzerath has to stay in the ground,” she told The The Bharat Express News on the sidelines of the protest.

Wissler criticized an agreement reached last year between the government and utility company RWE to allow mining under the village in exchange for an earlier end to coal use in Germany. In short, some experts say the deal will lead to higher emissions.

“We are already dealing with droughts, famines and floods. Climate change is already happening,” she said. “And that is why wrong decisions must be corrected.”