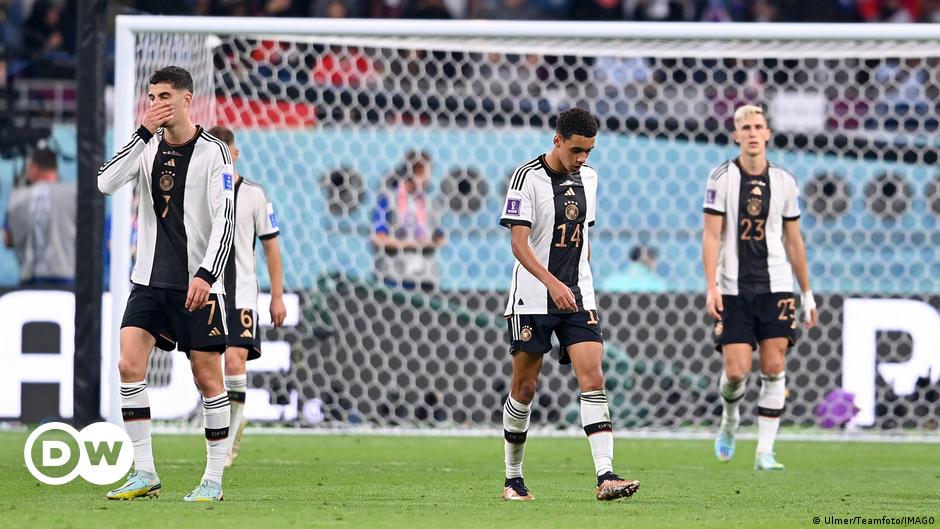 Two days after football’s governing body threatened Germany and other countries over the One Love bracelet, Germany suffered a sporting setback by losing a game they largely controlled.

And after their next opponent Spain won their opener 7-0 against Costa Rica, Germany’s World Cup is now on the line.

Even before a ball was kicked, Germany provided their final answer in the ongoing battle with FIFA.

Captain Manuel Neuer wore the FIFA-approved “No Discrimination” armband, but under the sleeve of his jersey – joked afterwards that the reason was that the manufacturer wasn’t great.

And then, shortly before kick-off, Germany’s starting eleven all covered their mouths during the team photo. Soon after, the German Football Association posted a statement saying: “To deny us the bracelet is the same as to deny us a vote.”

Germany certainly made their point off the pitch and for 70 minutes the same was largely true of their performance on the pitch.

Over an hour comfortable and ahead thanks to Ilkay Gundogan’s coolly taken penalty, Germany needed just a second goal to secure three points. But despite the best efforts of Serge Gnabry, Jamal Musiala, Jonas Hofmann and Gundogan, it never came when the well-known lack of ruthlessness in the attack came to light.

Germany’s inability to target Niclas Füllkrug, coming off the bench in the last 10 minutes, was a reminder of how long it has been since this team has played with a real number nine, as Hansi Flick’s team paid the price for their poor composure on offense as an effective Japanese team quickly exposed their weaknesses at the back.

In 17 games under Flick, Germany played with 12 different defensive units. In each of their last four games, their right-back has been different. The defensive issues on this side have been a problem for a long time, but there’s certainly a sense that Flick’s selections and substitutions aren’t helping.

Nico Schlotterbeck, a surprise starter, marked air for Ritsu Doan’s equalizer and remained in the dust of Takuma Asano for second.

A mainstay on left under Flick, David Raum was unsteady throughout and Niklas Süle played out of position as a defender, eventually opening the door for Japan’s second by inexplicably playing Asano offside. All three made it through the afternoon in Al-Rayyan rather than enjoying it, seeming to water down the usually strong Antonio Rüdiger.

“That second goal, no one has conceded an easier goal in the World Cup,” Gundogan told the broadcaster ARD then.

“The conviction to hold the ball in the back and offer yourself was missing… You almost got the feeling that not everyone wanted the ball.”

“It is inexplicable to me that we have not continued to play as we did in the first half,” added goalkeeper Neuer. “These are the basic principles that anyone at this level who plays for Germany should have and love Illy [Ilkay]I can not understand.”

Leon Goretzka made a particularly dejected figure afterwards, while Joshua Kimmich could hardly contain his anger. The Bayern Munich midfielder had a rock hard face as he complained that Germany was keeping the game open, saying: “We had to kill the opponent.”

Entering their second game under immense pressure, and knowing that defeat is likely to see them crash out of a second successive World Cup group stage, the comparisons to Russia 2018 are inevitable.

The problems are known, but the performance in the first half of the year remains cause for optimism. Germany wasn’t as blunt or naked as they were against Mexico in Moscow and there were a lot of positive signs from Gundogan and co, and especially from Musiala, in whom Germany really has one of the most exciting players in the world.

But the result was the same and that leaves Germany in trouble. The World Cup in Qatar remains a challenge for Germany on several fronts.