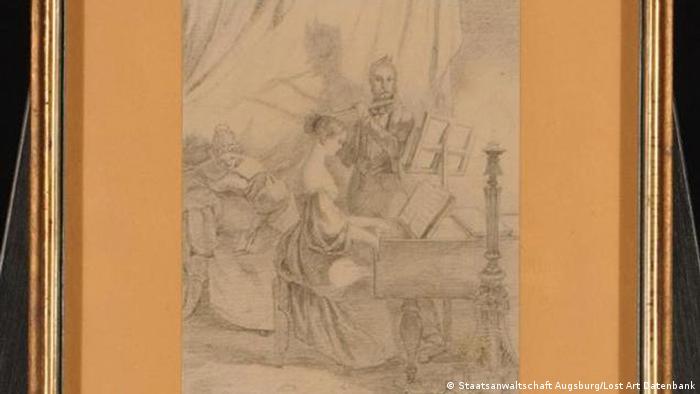 German officials said on Wednesday they had returned to its rightful owners the last of 14 works of art unambiguously confirmed to have been looted by the Nazis.

Culture Minister Monika Grütters said all of the pieces identified in a report earlier this year as stolen by the Nazis had now been returned. The artwork comes from a collection owned by the now-deceased Munich retiree Cornelius Gurlitt – the son of a Nazi-era art dealer – which surfaced 8 years ago.

The most recent work to be returned is “Klavierspiel” (Playing the Piano), a drawing by the German artist Carl Spitzweg. It was passed on to the Christie’s auction house as per the wishes of the heirs of the Jewish music publisher Henri Hinrichsen, murdered by the Nazis at Auschwitz in 1942.

The handover was organized with the Museum of Fine Arts Bern, which inherited the collection upon Gurlitt’s death in 2014.

Grütters said it was “an important signal” that all works identified so far as looted works of art had been returned to the heirs of their owners.

“Behind each of these images hides a human and tragic fate like that of the victim of Auschwitz, Dr Henri Hinrichsen,” she said in a statement.

“We cannot compensate for this grave suffering, but we are trying with the assessment of the looting of Nazi art to make a contribution to historical justice and to assume our moral responsibility.

Grütters stressed that Germany has a lasting commitment to continue the assessment and provenance research of works of art.

How works of art appeared after decades

Recluse Cornelius Gurlitt, who died in 2014, had hidden more than 1,200 works in his Munich apartment, plus around 250 more found at a property on the outskirts of the Austrian city of Salzburg. He inherited much of the collection from his father, a Nazi-era art dealer. Officials first discovered his art collection during an investigation into a tax case in 2012.

Authorities seized some 1,500 pieces in all, including works by notable artists such as Picasso, Renoir, Cézanne and Matisse.

The discovery of the treasure, kept secret until the following year, made headlines around the world and reignited a debate about how Germany had worked hard to reconcile the art looted by the Nazi regime with its rightful owners.

In his will, Gurlitt bequeathed the works to a Swiss museum, the Kunstmuseum Bern. However, a German government-backed foundation worked with the museum to ensure that any pieces looted from Jewish owners were returned.

The relatively small number of works returned in recent years has been attributed to the careful and gradual process of developing ownership of each piece.

The restitution process has been criticized by many heirs and activists as being too slow. According to them, this case underlines the permanent need for in-depth research on the provenance of works conserved more generally in museum and private collections.

Frankfurt Airport: the terminal reopens after a police operation | TBEN | 16.01.2021