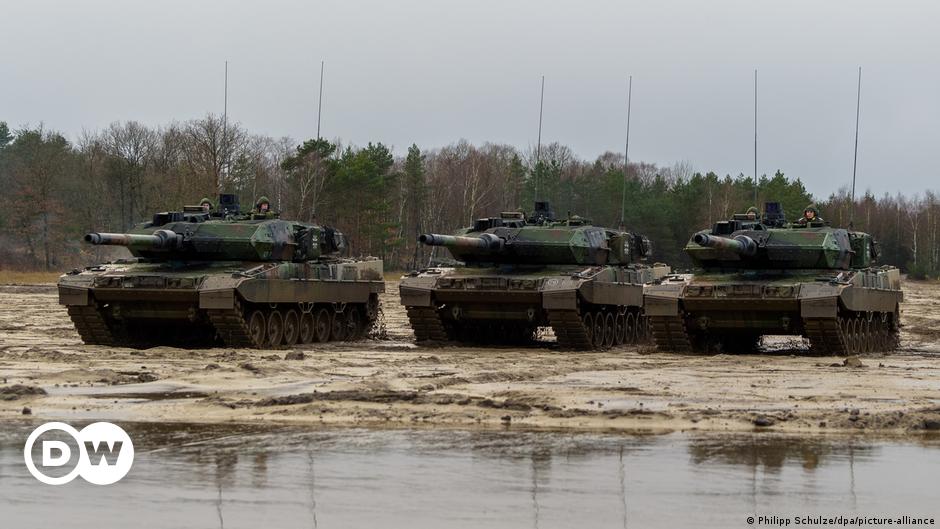 Germany would not stand in the way of Poland sending its German-made Leopard 2 tanks to Ukraine, German Foreign Minister Annalena Baerbock said in an interview with French television LCI on Sunday.

When asked what would happen if Poland went ahead and sent its Leopard 2 tanks without German approval, Baerbock said: “At the moment the question has not been asked, but if we were asked we would not stand in the way .”

“We know how important these tanks are and that is why we are now discussing this with our partners,” the German foreign minister added. “We must ensure that human lives are saved and the territory of Ukraine is liberated.”

Earlier on Sunday, German Chancellor Olaf Scholz reaffirmed that Berlin and Paris would support Ukraine in their fight against the Russian occupation and would not allow Europe to return to “hate and national rivalry”.

“We will continue to give Ukraine all the support it needs for as long as necessary. Together, as Europeans, to defend our European peace project,” he said during a visit to Paris to mark the 60th anniversary of the historic Franco-German Elysee Treaty.

German Defense Minister Boris Pistorius said on Sunday that he expects a decision soon on the delivery of the tanks to Ukraine.

Pistorius told German public television ARD that Berlin would not make a hasty decision because there were many factors to consider, including the implications for the security of the German population at home.

Germany is under intense pressure both to supply Leopard 2 main battle tanks to Ukraine and to allow other countries to send their German-made tanks to Ukrainian forces. But Berlin hesitated to steer the highly advanced Leopard 2 tanks to Ukraine out of concern that it could lead to an extension of the Russian war in Ukraine.

Poland has repeatedly criticized Berlin for its hesitant attitude.

Polish Prime Minister Mateusz Morawiecki told the national Polish PAP news agency: “Germany’s attitude is unacceptable. It has been almost a year since the war started. Innocent people are dying every day.”

Here are other updates on the war in Ukraine on Sunday, January 22:

Macron does not rule out supplying French heavy tanks to Ukraine

At a joint press conference with German Chancellor Olaf Scholz on Sunday, Macron said he had asked the defense ministry to work on it, insisting that “nothing is ruled out”.

However, the French president stressed that sending all hardware to Ukraine to push away Russian troops must be decided “collectively” and coordinated with allies, including Germany.

Macron also said deploying the heavy tanks in Ukraine should not weaken France’s own defense capabilities or escalate the conflict.

Germany has recently been under enormous pressure to supply main battle tanks to Ukraine. Berlin was hesitant to send the highly advanced German-made Leopard 2 tanks to Ukraine or allow other countries to transfer them.

On Sunday, Scholz reiterated Berlin’s position on the issue, stressing that his country had always acted in close consultation with its allies.

Ukrainian President Volodymyr Zelenkskyy said he would make important decisions on tackling corruption in the coming week as reports of high-level corruption emerged this week.

In his nightly speech, the Ukrainian leader said: “I want this to be clear: there will be no return to what used to be, to the way different people are close to state institutions or those who lived behind a chair all their lives. “

Ukraine has a history of government corruption and was the second most corrupt country in Europe in 2021 according to Transperancy International’s 2021 Corruption Perceptions Index.

According to the index, Ukraine ranks 122nd out of 180 countries, while Russia ranks 136th.

German Defense Minister Boris Pistorius said he was “sure” he would travel to Ukraine soon. “Probably even within the next four weeks,” he said Bild am Sonntag newspaper.

Pistorius, who took office on Thursday after his predecessor Christine Lambrecht stepped down, said his ministry is looking into how best to prepare for any decisions on the issue.

“We are in very close dialogue with our international partners, primarily the US, on this issue.”

Vyacheslav Volodin, the speaker of Russia’s lower house, warned that the West supplying Ukraine with offensive weapons would lead the world to a “terrible war”.

“If Washington and NATO countries provide weapons that will be used to attack civilian cities and try to seize our territories, as they threaten, it will lead to retaliation with more powerful weapons,” Volodin said in the Telegram messaging app.

“Deliveries of assault weapons to the Kiev regime will lead to a global catastrophe,” he said.

The head of the Duma said Moscow considered attacks on the Ukrainian territories of Luhansk, Donetsk, Zaporizhzhia and Kherson, which Russia annexed and occupied, as an attack on its territory.

War led to a “new resurgence” of unity, says Zelenskyy

Zelenskyy said in an emotional video that the Russian invasion of Ukraine led to a “new resurgence of our Ukrainian unity” as millions of Ukrainians stood together to defend the country.

The British Ministry of Defense said in its regular intelligence update that Russia likely struggled to find the equipment and personnel it needed after Moscow announced plans to expand its armed forces.

Russian Defense Minister Sergei Shoigu recently announced measures to expand the army, including an increase in the number of troops from 1.15 million to 1.5 million.

“Shoigu’s plans indicate that the Russian leadership most likely estimates that a heightened conventional military threat will continue for many years after the current war in Ukraine,” the British report said.

“However, Russia will most likely struggle to find personnel and equip the planned expansion.”

The British Ministry has released daily intelligence reports on the war since Russia entered the war in Ukraine last year. Russia accused the UK of a disinformation campaign.

Norwegian Defense Chief Eirik Kristoffersen said about 180,000 Russian and 100,000 Ukrainian soldiers were killed or injured during the war in Ukraine.

“Russian losses are approaching 180,000 dead or wounded soldiers,” he said in an interview with TV2, without specifying how the figures were calculated.

“Ukrainian losses are probably more than 100,000 dead or injured. In addition, Ukraine has about 30,000 civilians who died in this terrible war,” Kristoffersen said.

It is the highest estimate since General Mark Milley, chairman of the US joint chiefs of staff, said in November that the Russian military had suffered more than 100,000 killed or wounded, with a “probably” similar toll on the Ukrainian side.

Neither Russia nor Ukraine have released their number of victims in months, and none of the numbers can be independently verified.

However, Kristoffersen warned, “Russia can continue (this war) for quite some time,” citing Moscow’s mobilization and weapons production capabilities.

More TBEN coverage of the war in Ukraine

A new investigation by a German newspaper says the former Bulgarian government quietly supplied Ukraine with weapons shortly after Russia invaded last year. TBEN investigates the news about the secret weapons stockpiles and what this means for Bulgaria.

Russia’s attacks on Ukraine’s energy grid have forced many cities to implement power cuts to save energy. Kiev residents speak of the serious consequences for people on the street.

Ukraine: Kiev is dangerous in the dark